If you see an odd zig-zag pattern on the surface of one of your pans, take a good look — you’re getting a glimpse into your tin’s molecular structure.

This pattern showed up on the tin lining of my gorgeous Bottega del Rame pan after the first time I used it. I took a bunch of photos of this effect because it’s beautiful and I wanted to study it. It’s not on the entire surface of the pan — you can see the boundary where the zig-zags start.

Nothing bad has happened to the pan — it’s not etched or damaged in any way. Rather, the zig-zags are areas where the tin has formed crystals called grains. They’re translucent, so when you look at them, you’re actually seeing into the tin itself. I took some time to investigate this phenomenon and I think it’s fascinating and I’d love to share what I’ve learned.

We think of tin as a smooth and shiny silvery metal, but it’s actually a crystalline solid. Tin atoms exert intermolecular forces on each other that bind them together, and these same forces favor a certain orderly alignment of each atom with its neighbors. When tin atoms acquire enough thermal energy to move freely, they will seek to arrange themselves according to this alignment, a regular repeating pattern called a crystal structure or lattice. On the right is a high-resolution tunneling electron microscope (HRTEM) image of individual tin atoms in their crystal lattice.

Tin is polycrystalline, meaning that it doesn’t form into one big crystal (like a big chunk of amethyst, for example) but rather into many individual crystallites. These mini-crystals combine to form larger crystals called grains. The size of the grains depends on several factors; grains start small and grow larger over time if the conditions are right for their growth.

I found a few graphics to show how crystallites combine to form grains and an animation of grain formation over time. You can see the grain boundaries forming between individual grains.

This is exactly what is going on with my pan: the zig-zags are thin flat grains of crystallized tin that formed on the surface. Each “zig” is a grain; the jagged pattern marching across the surface is due to crystallographic defects — spots where an irregularity in the alignment of the atoms broke the pattern. The lighter and darker gray colors appear because the crystals are translucent and the slight alterations in orientation refract light slightly differently.

I’m curious about the translucency and I don’t yet quite fully understand it. Tin crystals are translucent but only in a thin layer; how deep do the zig-zags go? Are they just a thin layer on top of opaque tin below, like a crust of transparent ice over a lake? Or are we looking all the way through to the intermetallic layer just above the copper? I’m going to look into this, but I suspect it’ll take some time.

In the meantime, I want to describe how I think the zig-zags got there in the first place.

How the tin on my pan crystallized

When my pan was tinned, the tin atoms were arranged chaotically; when I heated it for cooking, the tin atoms shifted slightly to form grains. To visualize how this could have happened, I like to think of Legos.

Melted tin atoms are like a big box of loose Legos. If you give the box a good shake, the Legos will all rattle around, which is kind of like what melted tin atoms do, too. When you heat tin, each atom absorbs energy and starts to vibrate. Add enough heat and each atom vibrates so much that it breaks loose from its neighbors. The tin has melted — it sloshes around as a liquid. 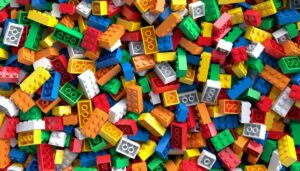 When molten tin was poured into my bare copper pan, it was like all the Legos were dumped out onto the floor. Imagine running your hands over the pile to spread it out — it would look something like this picture of Legos all jumbled up. That’s what the melted tin was like when the coppersmith spread the melted tin around the inside of my pan. The tin looks bright and shiny, but at the molecular level, the atoms are flowing and jostling and moving around like loose Legos.

Once the coppersmith was finished spreading the tin around, he cooled it off by quenching it, probably by dipping it into a water bath. The tin lining changed from liquid to solid, so that the atoms snapped into a lattice and tried to organize into grains, but they didn’t get very far. In Lego terms, they froze into position while they were tiny grains all jumbled up. The lining is beautiful, of course, as shown by the photos I took when the pan was brand new — all the chaos is at a scale far, far too tiny to be seen by the naked eye. All we see is a lovely pearly smooth lining with nary a zig-zag to be found.

So how did the zig-zags get there?

When I heated my pan up for cooking, I gave the tin grains a chance to grow larger. To do this, they needed to alter their orientation to click together, which required enough thermal energy to rotate in place or shift very slightly. The tin didn’t have to melt fully into liquid form but needed to absorb enough heat to vibrate and re-orient themselves, like a compass needle pivots to align with the earth’s magnetic field. I don’t recall exactly what it was that I cooked that evening, but it was probably a sauté of some kind, so that the pan surface hovered around 350ºF (177ºC). 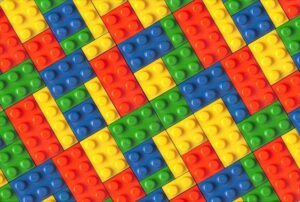 In Lego terms, imagine going over your layer of jumbled Legos and flipping and turning each one until it fits tightly with its neighbor. There is a “right way” the Legos line up neatly, just as the tin atoms have an innate “right” crystal structure. But there’s an important difference: unlike Legos, which have a deep perverse drive to scatter under the furniture, tin grains actively seek to coalesce because of the intermolecular forces. But this requires certain conditions: enough thermal energy to enable atomic realignment, for one, and perhaps other physical conditions such as the thickness of the tin, the smoothness of the surface, or some such. There is an extensive field of study on things like grain growth, recrystallization, and recovery, and I would welcome comment from any metallurgists out there who would care to consider this question.

Update: I found a video that I think illustrates this. Watch what happens when this guy shakes a bin of loose nails for about thirty seconds.

I think the loose nails going every which way in the bin are like the chaotic tin atoms in a freshly-laid lining. Shaking the bin puts the nails in motion, just as heating up the cooking pan gets the tin atoms vibrating with kinetic energy. As the nails happen to jostle into the “correct” alignment, lined up side by side, they lock into place and further jostling doesn’t dislodge them. By the end of the video, all the nails in the bin are lined up into neat rows — visualize the same thing happening to the tin atoms as they settle into their stable crystal structure.

My pan didn’t have zig-zags when I received it brand new; they formed only after I’d heated it. But my friend Erik Undiks at Rocky Mountain Retinning has seen it happen on objects right as they’re tinned. He had the presence of mind to take a video of zig-zags forming on the tinned surface of a flat pan lid.

You can clearly see how the wipe marks in the tin cause crystallization defects that disrupted the grain formation and altered the pattern. (Listen to me, pretending to be a metallurgist…) But what I really love about this video is that it makes it look like the crystal formation is contagious. I’m sure there’s a good logical explanation for this having to do with temperature change and grain nucleation, but I like to think of it as tin atoms joining hands and stepping into formation.

Now that I understand what the zig-zags are, they don’t bother me at all. I don’t know if they’ll go away the next time I use my pan but I’ll keep an eye on it and update you if the pan changes again. I suspect that because the grains are the “preferred” alignment, it would take much higher heat to shift them out of position again, higher than I’m likely to attain with stovetop cooking. If you have pans with the zig-zags and you noticed when and how they formed, I’d love to hear about it.

I hope you’ve enjoyed this very amateur attempt to explain this phenomenon. I’d like to thank Eric Undiks at Rocky Mountain Retinning for his video and Mac Kohler at Brooklyn Copper Cookware for a lively discussion on tin crystallization. As always, I would love to hear from other professionals who can speak to the science behind this.

All my posts are attempts to learn and share correct information, and these science-based ones most of all. Mac Kohler at Brooklyn Copper Cookware was kind enough to review this after I first posted it and offered a number of corrections and clarifications. I’m implemented them and I’m so grateful for his assistance.