The number on this pan’s handle is the year it was made.

My passion is French copper from the 19th century to the present but I don’t want that focus to make me blind to the beauty of pieces made elsewhere. This particular saucepan is a great example: it’s Polish, made in Warsaw in 1896, and it’s lovely. It was made by Zakład Aparatów Miedzianych i Odlewnia Adolf Witt i syn, “Copper Apparatus Plant and Foundry Adolf Witt and son” at 9-11 Leopoldine Street (now Emilii Plater Street) in Warsaw, Poland. 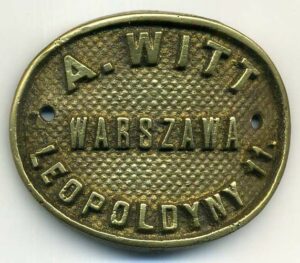 The Witt family had worked in metallurgy for generations — Andrzej Witt, Adolf’s father, was goldsmith to Napoleon III of France.

Adolf Witt opened his own metalworking factory in 1820 in Warsaw on Elektoralna Street; the business thrived and they needed to expand. In 1887, the family began the process of purchasing two adjacent plots at 9-11 Leopoldine Street and building a factory. The new facility opened in 1893.

The factory made all manner of copper objects. According to Jan Sołtan, descendent of the Witt family, “bathroom fittings, bath ovens, kitchen utensils were manufactured in the plant, as well as specialized equipment for hospitals, such as sterilization apparatuses.” In 1904, the family added a fine house on the street front.

The factory and the family house continued to operate until at least 1938. The buildings survived the bombing of Warsaw in World War II, but were nationalized in 1945 by the post-war Communist government. The property was restored to the family in 1960. The residence now operates as the Hostel Witt and has a large antique-style mural on its side wall in Polish and Russian advertising the Adolf Witt foundry. The factory buildings behind it are falling into decline, but there is a movement to declare the site a historical monument of Warsaw’s early industry.

And now to the pan.

The most obvious difference between this pan and a French pan of the same era is the handle. I believe the handle is solid copper, while French pans, with very few exceptions, have brass or iron handles. Using copper for the handle of a stovetop pan virtually guarantees that it’ll get quite hot, as copper is an excellent conductor of heat. I haven’t tested this out yet but my guess is that once placed on a hot surface, the handle of this pot will achieve the same temperature as the body.

It’s also beautiful. I love the chamfering along its length.

The pot itself is dovetailed, with has jagged yellow seams where it was pieced together from separate sheets of copper. The pattern on the base is asymmetrical, which I assume means it was hand-cut as opposed to stamped with a die. Dovetails are more correctly termed cramp seams, and they are a sign that a pan was assembled by hand prior to the era of machine presses with enough force to punch a sheet of copper into a cylinder. Try as I might I can find no hard and fast point in time when dovetailing gave way to deep-drawing (called emboutissage in French), but as this pan attests, dovetailing was alive and well in Warsaw in 1896. (One can also see the dot in the middle of the base left by the compass point as the coppersmith marked the circle on a sheet of copper.)

Another difference between this pot and French pots is that it is stamped on its handle, not on its body. This pot has three stamp groupings: the initials BW and the date 1896, the maker’s mark for the Adolf Witt foundry, and on the underside of the handle near the base, the notation 3 ½”. (The pot is about 3.5 quarts in capacity, but I don’t know why the quotation mark for inches is also present.)

I have reason to believe that 1896 is in fact the date of the pan’s make, because I have found a few other pans stamped for Adolf Witt that also have dates (and initials) stamped on the handle. I also found a better example of the oval marker’s mark; in the 1901 and 1906 pan examples shown below, the oval mark was replaced with a text mark.

This pan has almost certainly been retinned over its lifetime, perhaps several times, and the tin is in fair shape. There are some glimmers of copper in the base indicating that it needs retinning before use for cooking. The base is roughened now after decades of use, but the workmanship is fine. Note for example the smooth inner rivets, flush to the surface, as well-made as any French piece. The surface is also lightly hammered — not as pronounced a surface texture as the martelage on a thick French piece, but rather evidence that it was shaped and smoothed by hand.

This pan reminds me to guard against tunnel vision. French copper represents some of the best technology at the time, but not all the beauty. This piece of copper is designed from a different aesthetic — the handle a little rougher, a little more wrought, so to speak — but it is lovely. And, of course, after more than a hundred and twenty years, it is still here — and that is enduring beauty.

Przy giserni, czyli relikt dawnego miasta (At the foundry, a relic of the former city), Lada Wojciech, May 21 2010, Życie Warszawy.