This rondeau served passengers on the finest railway lines in Europe.

Reader Stephen Whalen shares my passion for copper pans stamped for the Compagnie Internationale des Wagons-Lits (CIWL), the great European railway operator founded in 1874. These pots and pans were used in the dining cars on trains that criss-crossed Europe, the most famous of which was the Orient Express. CIWL’s trains carried travelers from France as far as Cairo, China, and Russia in luxury, and the compact kitchens in their dining cars served haute cuisine cooked on beautiful French copper. 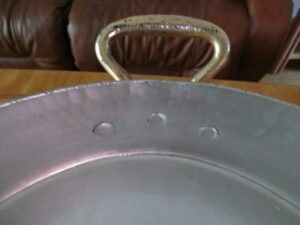 Part of the charm of these pots and pans is that each usually carries a stamp to identify the route or dining car to which it was assigned. This pan carries the stamp “WL” for Wagons-Lits and the number 2372 corresponding to a specific dining car. The serial numbers of CIWL dining cars were sequential, as they were commissioned and constructed in groups; car 2372 would likely have been in the same series car 2419 that served as the model for the HO scale model below. According to model train forums, these cars had exteriors made from teak wood and were very luxurious inside. Car 2419 is quite famous, as it was the site of the signing of the World War I armistice agreement in 1918.

Update: I posted a query to the LR PRESSE site, an online model train community. A very kind member named Pierre was able to identify that the CIWL restaurant car 2372 was a “dining car built by Van der Zypen & Charlier (Köln-Deutz) in 1913 for the CIWL Spanish fleet.” This is an interesting data point as the dovetails on this pot are archaic for 1913. I am either wrong about its approximate date of manufacture or this was an existing piece that was acquired and stamped for CIWL after its creation. I looked at records of CIWL’s routes in Spain around 1913 and there are more routes than I can list here — but please check trains-worldexpresses.com for a complete chronology of CIWL on the Iberian peninsula.

This is a beautiful antique pot, most likely pre-1900. It is dovetailed, indicating that it was manufactured prior to the use of powered machine presses. The dovetails on this pan look to be in excellent condition.

My WL-stamped soup pot was made by Lefèvre Frères in Villedieu, but this pan carries the stamp of Dehillerin.

This pan has been beautifully restored by Jim Hamann at East Coast Tinning. According to Stephen, the unrestored pot was slightly out of round and the base had been bowed out so that the pot did not sit flat. Jim was able to address both issues and Stephen is very happy with the results.

Here are a few before and after photos so you can appreciate Jim’s work.

One of the benefits of working with an experienced copper restorer like East Coast Tinning is that they are able to polish the copper without removing the surface texture that gives this pan its character. Note in the before and after photos below that the flanks of this pan have been brightened considerably without obliterating the terrain of the surface.

My thanks to Stephen Whalen for investing in this pan for its restoration and sharing the photographs with us. We are still looking for a guide to the numbering of CIWL dining cars; a few famous cars such as 2419 help estimate the time period of operation, but there are many gaps. If you happen to know of such a resource, I’d be very grateful if you would let me know in the comments.