These ice cream molds are a link to a largely forgotten trade.

This guest post is written and photographed by reader Roger W. 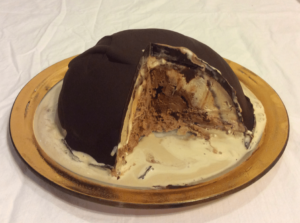 I would like to present the ice cream bombe, a nineteenth century tool to produce molded ice cream and sorbet. The method was similar to a Bain marie except that the bath was of crushed ice and salt. Ice melt is endothermic, and the copper conducts heat out of the food causing it to freeze.

It was not until the Victorian era that that sugar became an affordable luxury. The development of plantations in the West Indies drove the discovery in France that sugar could be extracted from beets. At the same time, improved animal breeding generated higher yields of milk and cream, and for the first time fresh eggs were available all year round. Joseph Paxton developed technically advanced greenhouses at Chatsworth in the 1830s and the repeal of the taxation of glass in 1845 made them a viable proposition to extend the range and season of fruit that could be grown. (“Pineapples in England! We can do that!”)  Everything was set for a dessert craze and that is just what happened — the more elaborate the better.

One problem: Where does one get ice in the summer? Eighteenth century English manor houses typically had an ice well or icehouse, usually a domed or egg-shaped outbuilding made of brick to create an insulated underground storeroom into which winter ice was packed and used year-round. In the UK the supply of natural ice is far from reliable, so ice was shipped first from America and later from Norway in sailing vessels! A major and profitable trade — the greater the trouble and expense the more desirable the product.

Here I have two molds each of which was almost certainly part of a set, the smaller 11.5 cm high by 10cm diameter and I estimate 0.75 mm thick. The other mold is of similar construction but 13cm by 12cm and unfortunately lacks its lid. Neither is marked in any way — they are probably English but could be French.

It has a close fitting push on lid with a ring handle. Some examples are numbered so lids can be matched to the body and contents identified without opening.

The base is brass and screws into a brass boss which is soft soldered to the body of the mold.

The base also serves as a plug which, once unscrewed, allowed the cook to place a cloth over the hole and blow into it to release the icy treat within.

Internally, it is tin lined.

My grandfather was exempted military service in the Second World War on health grounds, a collapsed lung resulting from childhood pneumonia before the use of antibiotics. He did his bit as a Fire Brigade mechanic and when crews were short would make up numbers. He picked up the smaller mold from a bomb site, technically looting though I don’t think there was any chance of the owner reclaiming it and the value so low at the time no one would have cared. I came by the other one honestly!

Roger, I’d always wondered what these little objects were for and how they were used — thank you so much for sharing yours with us and explaining their history! — VFC