These two pots solved a mystery for me.

These tall skinny pots are soup pots, or as they called in French, bains à potages. The potage makes sense: it’s a thick creamy soup with the texture of porridge or a purée. But the bain has always confused me, because it means bath. What is a “bath for soup”? I had chalked this up as yet another instance of confusing archaic French culinary terminology and moved on with my life.

But along with sharing the two pots for this post, owner Stephen Whalen included a photo from his copy of the 1925 Jacquotot catalog that cracked the case wide open. According to Jacquotot, the full name for this type of pot is bain-marie à potages. Aha! I looked back a little earlier in time to my own 1914 Gaillard catalog and found an action shot, so to speak: a set of these pots of varying sizes set inside a tray.

I know that the classic French batterie de cuisine includes a bain-marie for sauces, but here it is for potages as well. Of course this is eminently sensible —  sauces and potages are of a similar consistency and share a sensitivity to temperature: too hot and a thick potage could scorch. The 1956 Gaillard catalog displays bains-marie à potage and bains-marie à sauce side-by-side so you can see the differences. Notice that the bains à potage are tinned only on the inside and left bare copper on the exterior, while the bains-marie à sauce are tinned inside and out (entièrement étamé). Also bear in mind the variety of handles offered: Gaillard in 1914 offered the avec oreilles (with ear-shaped tab handles) or à poignées (with D-shaped handles); the 1925 Jacquotot version of oreilles is a simplified two-rivet copper handgrip they call oreillons (literally, “big ears”). By 1956, Gaillard offered only D-shaped poignées. If you see pots like these online, the handle style could be a clue to differentiate Jacquotot from Gaillard. (As for the bains-marie a sauce, I’m sure there’s a reason why they were only ever offered with iron stick handles, but that investigation will have to wait for a future post!)

This explains the lingering word bain in the pot’s name — it hearkens back to the era when restaurants kept an array of potages at the ready in a dedicated warm-water bath. Restaurants and caterers still use bains-marie in different configurations for warm buffets and the like but I have yet to hear of a home cook who has much use for one. But while the bain has fallen away, so to speak, the pot itself is eminently useful: it prevents evaporation by reducing the surface area exposed to the air. Managing moisture is one of the central tasks of cooking; think of how browning, steaming, poaching, simmering, and boiling each entail adding, sustaining, or eliminating moisture at the right time. These are cooking vessels for conserving moisture: put water or broth into this pot and it will do its best to keep that moisture from escaping. Even if the pot is uncovered, its narrow opening means that water will evaporate more slowly than from a wide-mouth stewpot of the same volume.

I use my bain à potage for a variety of tasks: heating soups and sauces, of course, but also for boiling water for long-shaped pasta — it’s convenient to dunk the entire length in the water at once, as opposed to hovering anxiously while it slowly collapses into a shallower pan. I’ve also slid in a steamer insert and steamed asparagus, again taking advantage of the long shape.

This lovely pot is stamped for Dehillerin and I would date it to 1890-1900. I put together a field guide to Dehillerin that attempts to piece together the firm’s history and stamp progression and this particular version of stamp is one I associate with the period when Eugène Dehillerin had just opened his eponymous cookware store at 18 Rue Coquillière in Paris.

He had bought his own copper workshop around 1880, but it appears that he also sold copper from a range of makers in Paris and stamped them all with his store’s name (as was common practice). Subtle differences between the stamps are possible indicators of the specific maker, but unfortunately at this moment I don’t know which specific makers had which stamp.

One element of this piece’s construction that supports that timeframe are its dovetails. You can see the seam of brass around the base and up one side of the pot under the handle. This pot was assembled from two pieces of copper — a flat circular base and a long rectangle curled into a cylinder for the sidewalls — joined together with hammering and sealed with molten brass. Dovetails (or more correctly, cramp seams) can be remarkably resilient but over a century of time and use can crack and separate. A good retinner will know how to fix them in an era-appropriate way.

This piece has two planes of bevels around the base that were intentionally added to help the pot resist dents. Copper is a soft metal but it can be made more resilient by bending or striking it; at the molecular level, the copper atoms are dislodged and resettled into their proper crystalline structure where they interlock and resist further movement — meaning that the copper can take physical impact without deforming. These bevels, as well as the hammering over the surface of the pot, are signs that the maker took extra time to strengthen this pot for duty in a busy kitchen. 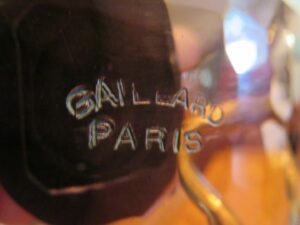 This is the smaller of the two pots and the younger by several decades. It is stamped “Gaillard Paris” in the design that I have tentatively dated to the 1930s-1940s. My field guide to Gaillard covers Gaillard’s stamp progression as well as I have been able to establish it, and at the moment I believe this stamp fits in just after Jules Gaillard’s death in the 1930s and was used on Gaillard production through World War II.

You should also note that this a genuine Gaillard stamp and not the facsimile. (If you are not familiar with this situation, I have two posts about this issue, the first in March 2020 when I first became aware of it and a second post in June 2020.) Look for the alignment of the letter R with the L’s above it: the vertical stroke of the R lines up with the first L of Gaillard. Please pay close attention to copper stamped with this arrangement of “Gaillard Paris” so that you can distinguish the genuine from the facsimile and make an informed buying decision.

The craftsmanship of this pot is right in line with mid-20th century technology. Like the 18cm pot it has been assembled from two pieces of copper, but whereas the earlier pot shows the zig-zag yellow seams of dovetails, this one appears seamless. The invention in France in 1901 of the hand-held acetylene torch marked the beginning of welding and the end of the era of dovetailing; welding is much faster and produces much stronger and more resilient joins. By the 1930s, when this pot was made, dovetails were pretty much obsolete.

The base is a smooth expanse of copper. Again, there are no dovetails or seams of any kind. The earlier method of dovetailing was to use a flat base piece and to bend the ends of the sidewalls to join it, but the welding method instead presses the base piece into a cup shape. The welding seam is quite subtle and should be found running around the sidewalls about 1-2 inches above the base. (Check your stockpots and daubières as well — on some of my pieces the seam is quite obvious, while on others it is virtually invisible.)

Note that this pot does not have bevels around the edge of the base. As above, I consider bevels to be an extra step added to a piece to increase its resistance to dents, but the practice seems to have fallen away by the mid-20th century, even on large restaurant-quality items. I can think of multiple reasons why: to save time during production; to reduce the cost of labor; or perhaps in recognition that such protective measures were not necessary for copper destined for home use. If you have information about this I would love to know more.

One curiosity about this pot is the dull pewter color of the rivets. Take a close look.

I can see a gleam of copper on the rivet on the left, with leads me to suspect the rivets are copper that has been covered with a dab of tin. What do you think?

I’d like to thank Stephen for sharing these two pots with us, and also for revealing the origin of the “bath for soup.” Our modern kitchen appliances give us much more precise temperature control compared to the huge cast-iron ovens of the 19th and early 20th century, and we don’t routinely resort to gentle water baths for moderate temperature except for specialized confectionery and the like. But while the bain-marie à potages has crawled from the water to become the bain à potages on the dry land of the stovetop, its name still carries an echo of its primordial origins.