This pot hasn’t just been repaired — it’s been remade. 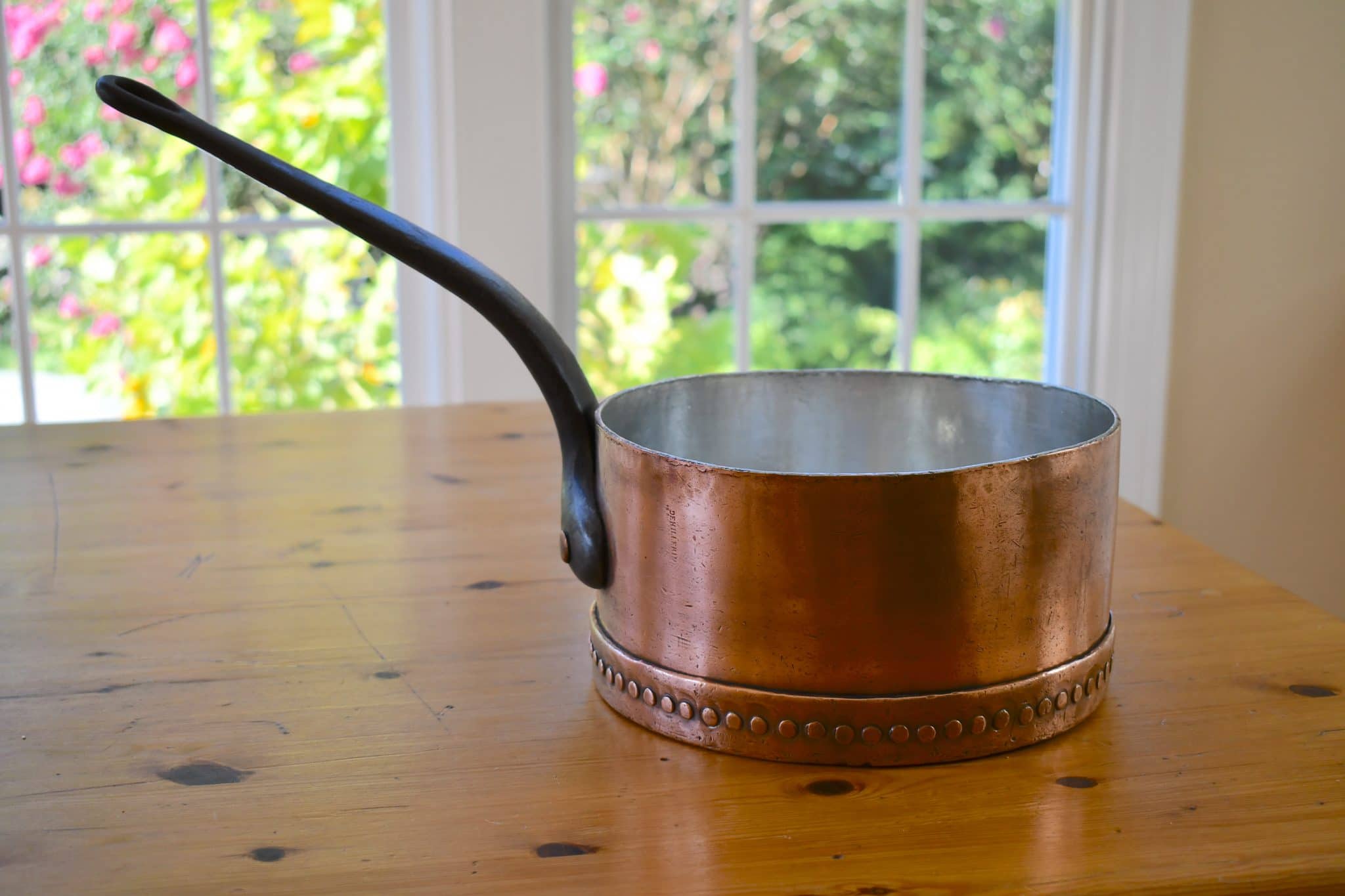 The unusual riveting around this pot’s base is what caught my eye, but when I was able to hold and examine it, I realized that the repair to the base is only part of this pot’s story.

The body of the pot

Sometime between 1890 and 1900, a French coppersmith made this saucepan for the Dehillerin store in Paris. Eugène Dehillerin was a coppersmith but his eponymous store also sold pieces by other makers. Every pot was stamped with the store’s name and address at 18 Rue Coquillière but there are several versions of stamp with minor variations. I suspect each version came from a different supplier: Dehillerin’s own workshop, Gaillard, Legry, Duval, or any number of Parisian makers. As of yet I don’t know which stamp came from which maker but they are all beautiful pieces that exemplify French craftsmanship at the height of the golden age of antique copper.

What this means is that the Dehillerin stamp on this pot does not necessarily mean that it was made by Eugene Dehillerin — unless, of course, it was. But regardless of who made it, this was a high-quality pot. It measures between 2.8mm and 3mm thick at various points around the rim, and an inch or so lower thickens to 3mm to 3.2mm and may be thicker still towards the base. It’s not unusual for mid-19th century pots to be bottom-heavy; a pot hand-raised from a flat sheet of copper may have thinner sidewalls, particularly on cone-shaped Windsor pans. This tapered thickness has a cooking consequence as well: having the greatest mass of metal towards the base of the pan where it comes into direct contact with food puts the copper in the best place to spread and equalize cooking heat. The French coppersmiths knew this, of course, and so even into the early 20th century some makers continued tapering their pots even when metal presses made it possible to produce pans of perfectly consistent thickness; Gaillard showed a cut-away diagram of its tapered copper pots in its catalogs as late as 1956.

At some point the pot suffered some sort of damage to the degree that its base needed repair. Copper is a soft metal and many older pans are deformed in some way — dented, a little out of round, or convex in the base so that they don’t sit flat. But given the thickness of this pot’s sidewalls and its relatively small diameter, the damage must have been pretty severe. Instead of patching the damage, the smith decided to replace the base. He sheared away the base of the pot, formed a piece of copper into a shallow cup shape, set the pan body into it, and fixed the two pieces in place with a row of 67 copper rivets. 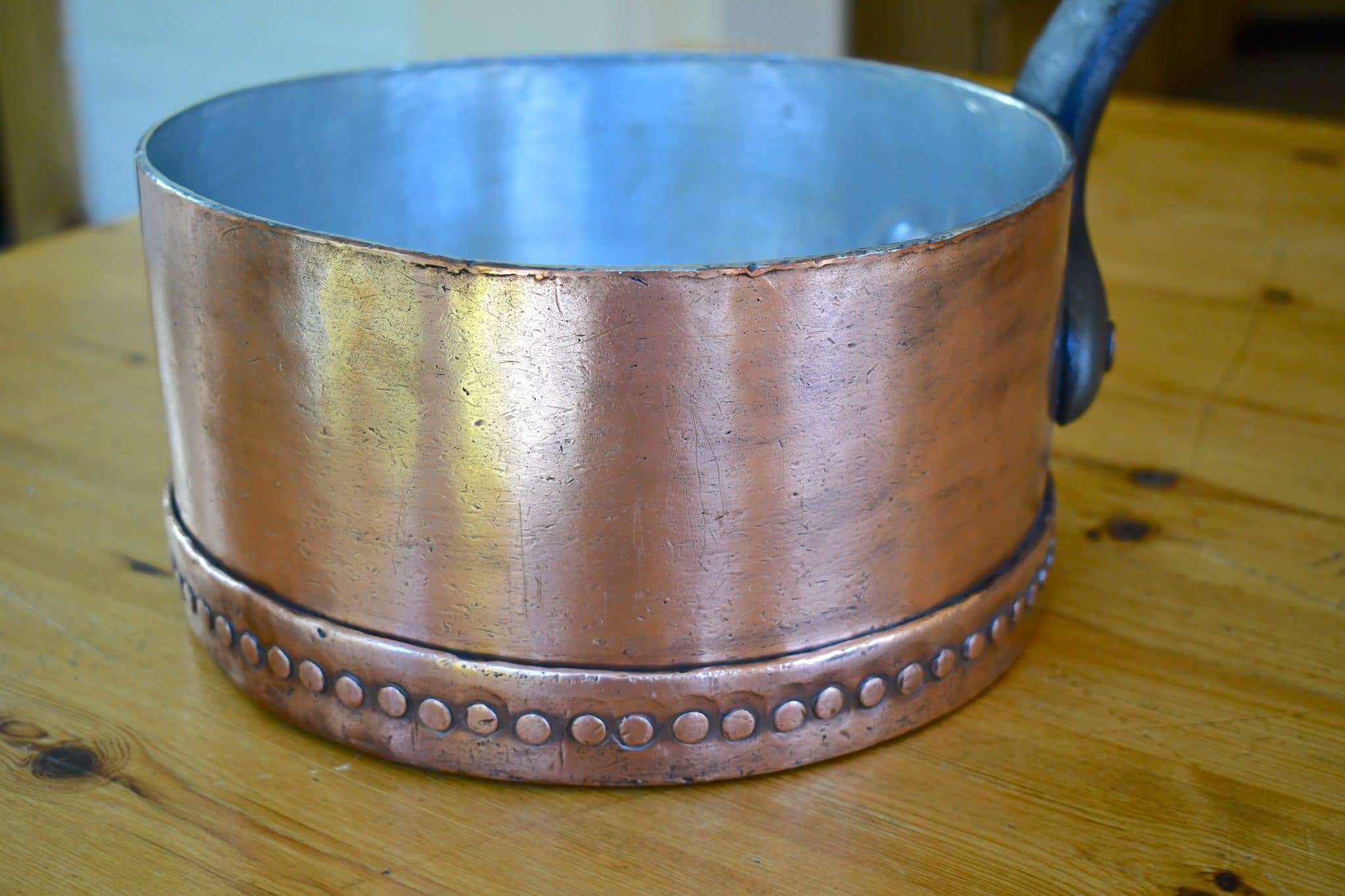 It is a marvel. Each rivet has a neat round exterior head and is set flush flat against the interior surface. Imagine for a moment what it must have been like to drill each hole, insert a rivet, and work right up against the base of the pan to finish it. I can’t imagine a riveting machine that could fit in this tight space and so I suspect this must have been done completely by hand. Look at how beautiful the rivets are — there are slight variations in the set of each one as is to be expected for hand-work like this, but they are all even and pleasing to the eye. This is masterful work.

I estimate that the base piece is 2mm to 2.5mm thick around its visible edge and likely just as thick across the flat portion.

I see no signs of brazing or welding and that strikes me as unusual. I would expect to see some kind of filler in the gaps to render the seam water-tight, as is done for a dovetail seam. The join of this pot’s sidewalls to its base relies only on a tight fit and the close-set rivets — there is no sealant between the pieces. Why was this repair done in this manner? Val Maguire at Southwest Hand Tinning restored this pot and has a theory.

I think the owner of this pan had a master boilermaker in his or her life that took it upon himself to make the repair using the expertise and skills at his disposal. Brazing is an art in and of itself and if this were in the kitchen of a rural village inn, it’s possible that the cost or availability of a braze repair would have been prohibitive.

I like Val’s theory — this pot does have a sort of steampunk look to it. And I think the work is exquisite.

The rivets around the base add quite a lot of mass to the pot. It weighs 5158g (11.4 lbs), and to put that in perspective, let’s compare it to some comparable recent-era Mauviel of consistent thickness as well as some antique bottom-heavy Dehillerin.

This pot is by far the heaviest of the bunch. It’s not just bottom-heavy but bottom-massive. If the sidewalls are 2.8 to 3mm thick and the base piece is 2.5mm thick, the pan should weigh somewhere around 3800g. Instead, it’s more than a kilo heavier and that extra weight has to be coming from the overlap and the rivets.

All that extra mass is arrayed around the perimeter of the base where it’s not in direct contact with food. How will this pan behave on the stovetop? If this pot were made of anything but copper, the metal would pull heat away from the food inside the pot. However, copper is so thermally conductive that I don’t think this would happen. I think the extra copper around the base would act as a sort of heat storage, absorbing and retaining heat that the copper base and sidewalls would distribute. What that suggests to me is that this 2.5-2.8mm pot would perform like thicker copper — that is, retaining heat and slowing down temperature shifts — because the base and sidewalls are depositing to and withdrawing heat from the “heat bank” around the edge of the rim. What do you think of this idea?

The base is not the only part of this pot that has been replaced. If you look closely at the rivets holding the handle in place you will see additional patched holes peeking out on the underside of the handle, and corresponding patches on the interior as well, just below the existing rivets.

Clearly this is not the original handle. Handle repair and rivet replacement is a routine process for well-used pots but the original holes shouldn’t need to be changed. Here, the smith patched the existing holes and cut three new ones, which would only be necessary for a new handle with a different geometry of drilled holes. My theory is that the handle was changed as a consequence of the added weight of the new riveted base. The original holes are more closely set, suggesting that the original handle had a smaller baseplate; the current handle has a broader baseplate designed for a larger and heavier pot, and that’s a good thing. 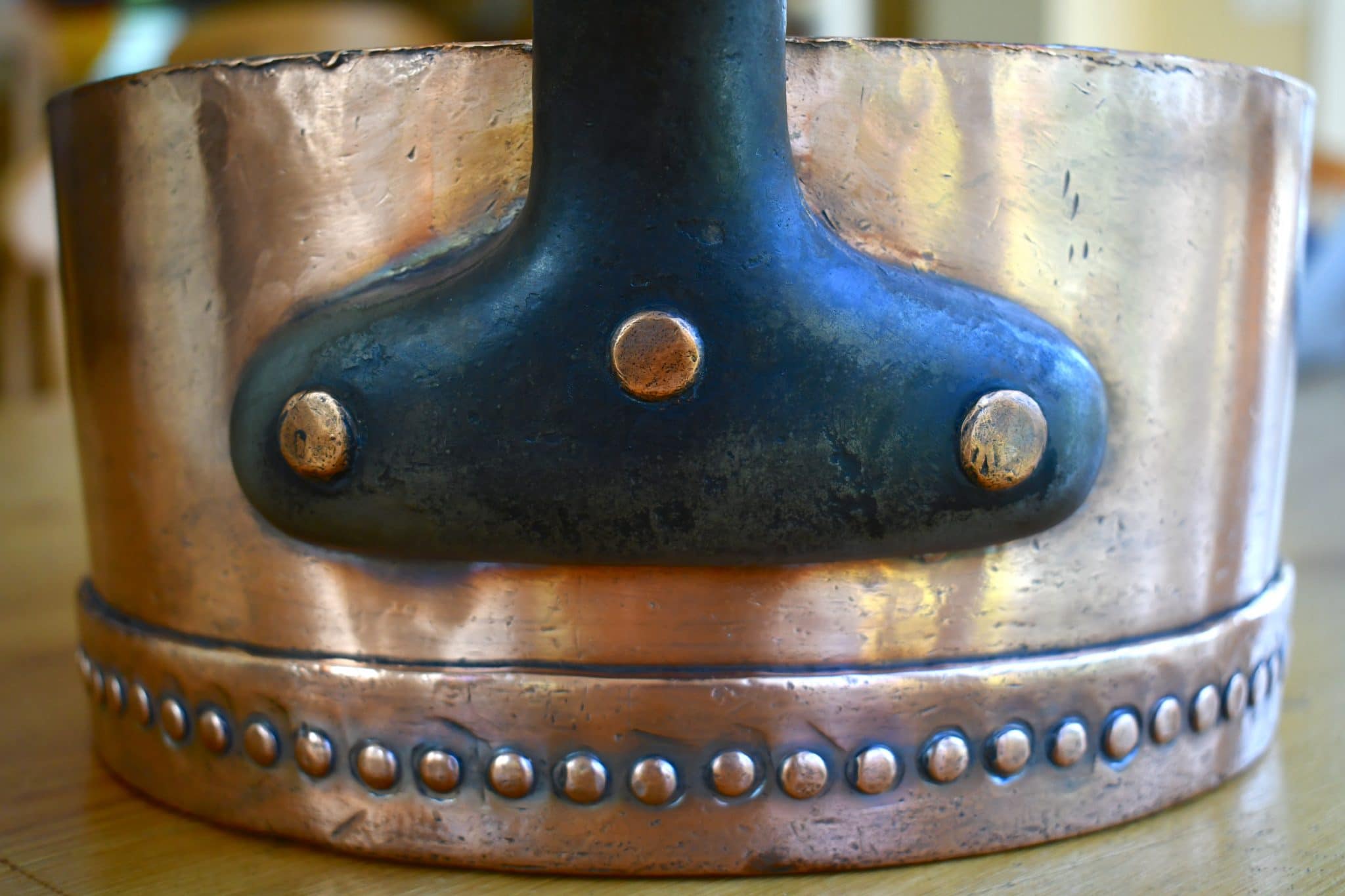 So this is the tale that I hear this pot tell: It was a lovely well-made saucepan until mischance nearly destroyed it. Then came a second chance — it was brought back to life. It received a new base, heavy and unwieldy, and a different handle broad enough to bear its weight. What had been a conventional object became something unusual.

It was remade into a new creation.

Please forgive me — the temptation to make a popular culture allusion proved too strong to resist. The original Frankenpan is this 30cm sauté pan, also repaired with a new base and handle but not nearly as skillfully as this one. This will be its mate, the Bride of Frankenpan.

I’d like to thank Val Maguire at Southwest Hand Tinning for her restoration of this pot. As you can see, she retinned it without disrupting the patina that had accumulated on the exterior, and that takes skill and sensitivity. I’m so glad to have this pot in my collection and I am grateful to Val for preparing it for its next century.