Scrollwork handles and the cockerel stamp

There is an unusual design of brass handle that I’ve seen on some antique pans. Where the prongs of the handgrip join the baseplate, there is a curved scrollwork decoration that adds a bit of flourish — a touch of rocaille, if you will. There is nary a straight line to be found anywhere along the curve of the baseplate, the spread of the prongs, or along the handgrip. These subtle design treatments transform a sturdy utilitarian element into something elegant while sacrificing neither physical strength nor visual solidity.

It catches my eye whenever I see one of them.

I’ve picked up a few pieces with this handle, all of them lovely antique items with 19th century craftsmanship. They must have been made by the same maker, but which one? None has ever carried a maker’s mark so it has always been a mystery.

Until now. Behold — the missing link! 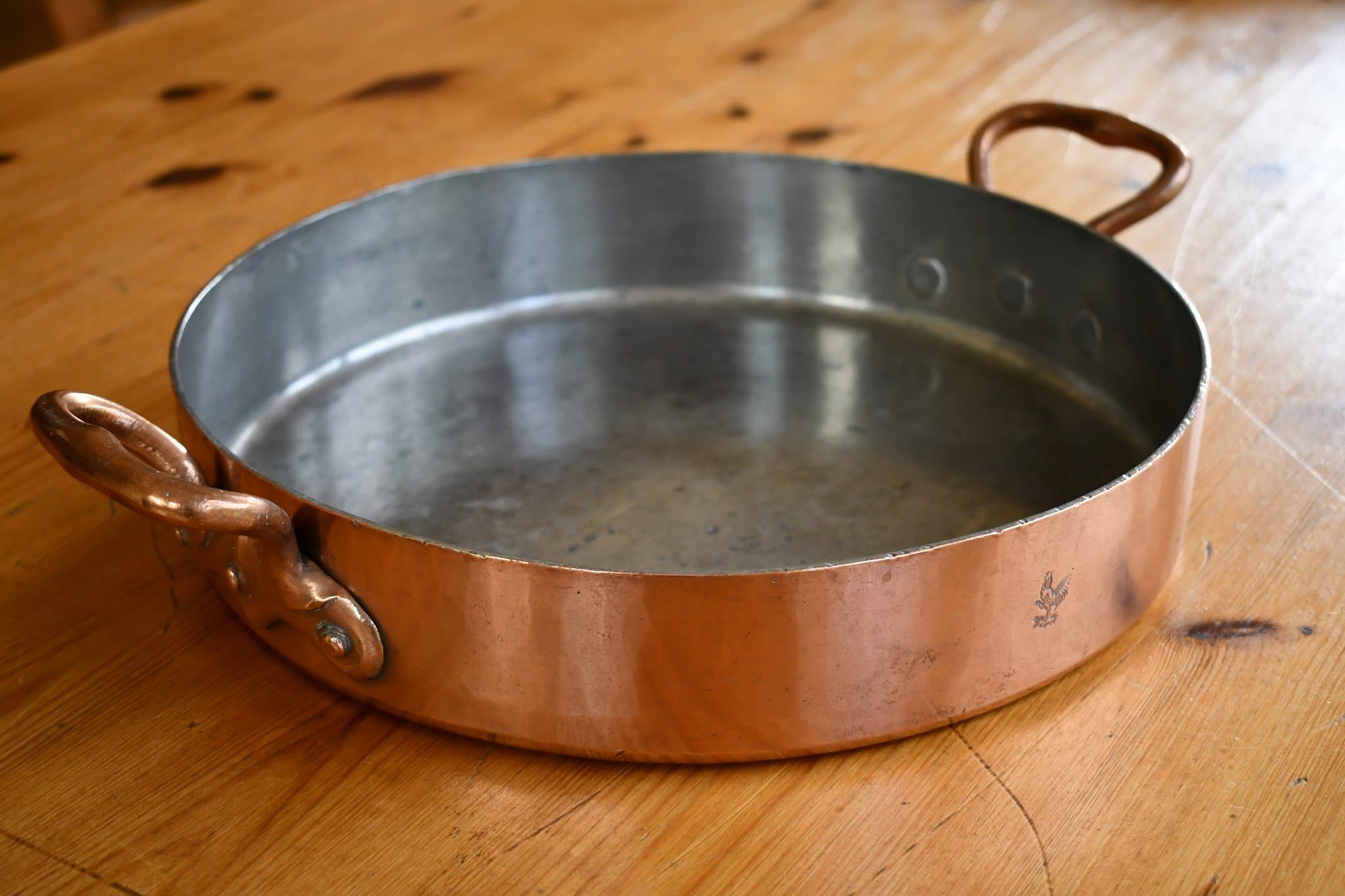 This pan has the scrollwork handles and a maker’s stamp in the form of a rooster. (Or, because I am very fancy, a cockerel.)

I think this cockerel stamp is the maker’s mark for pieces with this distinctive handle design. I have a few pieces with this handle design. Left to right, there’s a 26cm daubière; a 24cm stockpot with fitted lid; an 18cm saucepan with a cast-iron handle; a set of three roasting pans that are 30cm, 35cm, and 40cm long; a 29cm rondeau; and twin 16cm and 18cm stewpots.

I have a theory about who made them, but before I get into that I’d like to look at the pieces and consider what they have to tell about when and how they were made.

Two of the pieces — the rondeau and the saucepan — have the cockerel stamp. Look closely at the tufts of grass, the angle and shape of the bird’s head, and the number of feathers. While the image is of the same stylized rooster, these impressions were not made by the same stamp.

Stamps wear out through use. We’ve all seen pans with crisp sharp stamps and others with the same stamp where the lines are thicker and less defined. These two examples are clearly careful renderings of the same design but the minor details have shifted a little, which suggests that the stamp was re-made at some point. This was no small task — while a text stamp could be typeset, a drawing like this would need to be re-drawn. No wonder the details are a little off.

This is why I think this is a maker’s mark and not an owner’s mark — it seems to me that a stamp would last for hundreds of pans at least before losing its edge.

Here are those beautiful handles. The same scrollwork design is interpreted for multiple configurations: the classic three-rivet handle; a two-rivet version for the small 16cm stewpot; and a low-profile roaster handle with a handgrip that projects vertically.

To my eye, the stewpot and stockpot handle baseplates have a similar “frown” that feels antique to me, while the daubière, rondeau, and roasting pan have a less exaggerated downturn that more closely resembles the classic French shape. These differences suggest different molds for the brass casting, possibly a different supplier, and maybe even different time periods for their manufacture.

Two of these pieces have fitted lids, and the lid handles have a scrollwork detail at the base of the handgrip and elaborately shaped brackets. As with the side handles, the handgrip is not a utilitarian bar but widens subtly at the midpoint. They’re beautiful and share the aesthetic of the side handles.

The round pots have a small mark at the geometric center of the base. I believe this mark was left by the point of the compass that the smith used to cut the circle out of a sheet of copper. This is another sign of handwork, before metal punches made it easy to cut shapes of consistent diameter.

Every piece except for the rondeau and saucepan are assembled with dovetails. This is an archaic technique to join sheets of copper: the smith cuts crenellated “teeth” long the edge of each piece, slides them on top of each other, hammers them together, and seals the join with molten brass. Well-made dovetails on a well-kept pot can last for quite some time, but the join is nowhere near as strong as a welded seam. Large-scale industrial welding became feasible after 1901, with the invention of the acetylene torch in France, and my observation is that dovetailing disappeared on pots and pans by the 1920s.

The dovetails on these pieces are finely done and they have held up quite well.

The rivets (and a digression)

While the external rivet heads across all the pans look very similar — small, rounded, smooth — the rivet heads on the inside of the pots are different. Some of them look hand-made while others look machine-made. And then there’s the stockpot with rivets that look both hand-made and machine-made, which challenges my existing understanding of rivet craftsmanship.

The stewpots and the roasting pan have rivets with flat heads set flush with the inner surface of the pan. I have always considered this to be an indicator of hand-made rivets, custom-cut by the smith to fit the pot.

The rondeau, saucepan, and daubière have slightly domed internal rivet heads that are stamped with numbers. I have always considered this to be an indicator of a machine-made rivet with a mushroom head stamped with a size number.

But now here are the rivets on the stockpot. The rivet handles are flat and flush-set like a handmade rivet, but there are also unmistakeable numbers on them, as on a machine-made rivet. I’d think they were replacements but the lid handle has the same exact rivets, making it quite likely that these are the original rivets for the pot.

This kind of stuff matters to me because details like this help date pans. Up to the 19th century, metalsmiths would clip short lengths off a rod of copper and flatten one end to make the cap that would become the interior rivet head. The first rivet-making machine was invented in 1836 and by the mid-1860s there was a French machine could turn out thousands of rivets per hour. It’s hard to say exactly when a given French chaudronnerie stopped spending hours making its own rivets and turned to buying machine-made rivets en masse, but my guess is that mass-produced rivets were such a cost- and time-saver that most firms had switched over by the 1880s.

My best guess is that this stockpot has early machine-made rivets. Perhaps for a period of time the rivet makers produced flat-head rivets akin to those that smiths had made for themselves. But I imagine that mushroom-head rivets offer advantages in metalworking: they can withstand greater pressure, provide more mass to spread to seal the hole, and so forth. Perhaps it was only “light duty” objects like kitchenware that could get by with flat-head rivets, and so after an initial period of experimentation, demand petered out in favor of rivets with a more robust head like those on the daubière, rondeau, and saucepan.

The conclusion I come to is that timing-wise this stockpot falls between the stewpots and roasting pans with their flat and featureless rivets and the rondeau, saucepan, and daubière with their mushroom-head style. I’d love to hear what you think of this.

The copper has spoken for itself. It has pre-industrial and early industrial craftsmanship — dovetails, the dot, rivets that look like they span the hand-made and machine-made era. These pieces look to me to have been made without powered machinery, which pits them in the mid-19th century. That covers the how they were made, and in my assessment, when they were made as well.

So that leaves the question of who. And for that, let’s go back to the bird.

I’ve seen this bird before: it’s the logo of Dehillerin. Take a look at the Dehillerin advertisement below: the cockerel at the top bears a striking resemblance to the copper stamp above. And if you look even more closely you can spot the key clue to its origin. 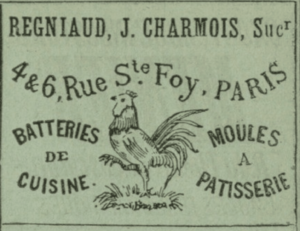 Towards the bottom, just above the all-important name “E. Dehillerin,” is the phrase Maisons Réunies Personne, Delzangles, J. Lasnier (Aubry & Charmois). This is Dehillerin’s lineage: these are copper workshops that Dehillerin acquired, absorbing their capabilities and customer lists and laying claim to each firm’s history as its own. And in the case of the last firm named above — Charmois — Dehillerin also absorbed that firm’s cockerel logo. I first see the cockerel mentioned in Charmois advertisements in 1881, and you can see the cockerel in use by Charmois in the advertisement at right, dated 1885.

The firm was purchased by Lasnier in 1887 and then Dehillerin bought Lasnier in 1907. So a pan with the cockerel stamp could be Charmois (until 1887) or Lasnier (1887 to 1907). I now wonder if the two slightly different stamp examples we’ve seen represent work during these different periods.

An earlier version of this post erroneously credited this mark to Lagaldie Freres, the firm that Eugène de Hillerin purchased in 1885. I apologize for my error.

September 24, 2020: Reader Karolina W. has a saucepan with the same cockerel stamp and an intriguing owner stamp: “A de R PARIS.”

Her cockerel stamp looks to me to be a third physical stamp. Compare hers to my two below — it looks most like the closed-beak version on my saucepan, but the details still look a little different. Sharp-eyed readers, what do you see?

My sincere thanks to Karolina for reaching out, photographing her pan at my request, and agreeing to share the photos with all of us!