This is one of the first pieces Dehillerin ever made. 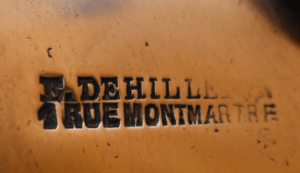 To launch his copper cookware business in Paris, young Eugène de Hillerin did what many an enterprising chaudronnier had done before him: he bought an existing business to serve as the foundation for his own. In 1885 he purchased the chaudronnerie Lagaldie Frères, which had closed its doors at 1 Rue Montmartre in 1882. As part of Lagaldie’s fonds de commerce (a French legal term that encompasses a company’s name, premises, stock, customer lists, and “goodwill”), Eugène acquired an instant lineage back to 1820. He stamped his copper with the 1 Rue Montmartre address from 1885 until he shifted his business to his eponymous kitchenware store at 18 Rue Coquillière, opened in 1890 and still family-run to this day.

I think this pan was made during that narrow window of time, and it’s a beauty.

It is a sauteuse évasée, a shape also called a Windsor (for reasons as yet unknown to me), a flared pan designed for reducing sauces. But the sides is this pan have a steep slope for a Windsor, steeper than Jules Gaillard évasées from the 1890s (see this one or this one); it reminds me more of Matt M.’s earlier dovetailed évasée, tentatively dated to 1850-1880.

This pan has five beveled planes between the base and sidewalls, more than I’ve ever seen on a pan.

It’s just a beautiful piece. It’s 2mm at the rim but quite bottom-heavy and likely thicker in the lower sidewalls and base. At 23cm and 3028g, it weighs a good 500g more than my 22cm that is 3.2mm at the rim. Perhaps that thick base gave the craftsman the surface area to lay down five bevels.

It has “the dot,” a small divot in the geometric center of the floor of the pan. I believe this mark was left by the smith’s compass as he drew a circle in a sheet of copper to cut for the pan, and I associate it with hand-craftsmanship. Hand-cutting was replaced by machine presses with dies that produced perfect shapes.

The inside rivets are flattened but not flush to the inner surface. Notice that the rivets each have a small number 6 on them. This is further evidence contradicting my theory that numbered rivets are 20th-century artifacts. Rivet-making machines were invented in the mid-19th century, but I had thought that it took several decades for mass-produced rivets to make their way into the French cookware industry. But this is clearly a 19th-century piece with mass-produced rivets — the 6 is a size indicator — which suggests that at least some Paris-based makers had adopted machine-made rivets by the 1880s.

Of course they could be replacement rivets, but I’m increasingly convinced that’s not the case. Consider this: some of my (presumed) pre-Dehillerin Lagaldie Frères pieces also have numbered rivets, as does this “Dehillerin Successeur Lagaldie” stewpot (likely made immediately after Eugène acquired Lagaldie), and now this Dehillerin-post-Lagaldie pan has them as well. Could Lagaldie have been an early adopter of machine-made rivets, and this practice conveyed along with the rest of the fonds de commerce when Eugène bought it in 1885? I consider the question of how to distinguish Dehillerin-made pieces from Dehillerin-stamped pieces to be one of the great as-yet-unsolved mysteries of antique copper — could numbered rivets be a signature of early Dehillerin production? I’m going to have to go look at some pieces once I’m done with this post.

The external rivets are small and rounded. The handle is cast iron with a slight casting defect on the neck of the handle.

The handle is otherwise very well made. It has been filed or ground on the surface at a consistent angle to produce an attractive uniform finish. The top plane of the handle is flat but the underside is curved to produce a pleasingly ergonomic feeling in the hand. (It was reader Matt M. who first drew my attention to this type of handle contour on his 1850-1880 dovetailed Windsor and his other J. Gaillard pieces.)

I am really pleased with this pan. It comes to me from Val Maguire at Southwest Hand Tinning; in addition to restoring pieces, Val offers a select few for sale that she has expertly restored. This pan is testimony to her eye for quality copper.