This was the kind of transaction we all hope for.

VFC says: This guest post has been written and photographed by reader Roger W.

I saw a saucepan I wanted on eBay and checked the vendor’s feedback, then the seller’s other items to see if this was a dealer or private seller. I tend to read some item descriptions to gauge whether I trust the seller. This dish was in seller’s other items and had not been picked up by any of the search terms I had used. The description was little more than dimensions and the photos did not do it justice. The price was low and I was unsure whether this was a good piece so I made a cheeky offer and to my surprise it was accepted.

When the parcel arrived I was so pleased with the saucepan that I scarcely glanced at the dish, which has turned out to be probably the best copper purchase I have made to date.

There are I think six rows of hammering around the outside though hard to see as it is basically planished and polished smooth.

The base has a slight ripple.

It is stamped 44 which is the length and also 2, perhaps it was part of a graduated set.

At first I thought there were no other markings which was frustrating because this is of high quality. When I had polished it I spotted a hotel name and then a day later the maker stamp on the bottom, incomplete and so faint as to be hard to find again even now I know where to look. It looks like someone deliberately tried to obliterate any identifying mark. I asked the seller if he knew anything of its history, he could only tell me where he had purchased it about 40 years ago and that he had hung it in an inglenook fireplace as decoration.

This site’s images of maker stamps have allowed me to know who made this and when. In strong sunlight, at an angle and with a magnifying glass held in front of my phone’s camera lens to shorten the focal length I was able to photograph the stamp, and by playing with the contrast and colour I have managed to get an image.

Examine what little there is, an oval and the last three letters “TCT” ?…..no “TOT” um ah well “JACQUOTOT”! There is even a bit of the first “O” and a tiny bit of the top of the “Q”, no doubt about it. Which of the three oval stamps?

VFC says: Allow me to see if I can help! Here’s your pan’s stamp overlaid by the 97 and 130 Rue de Grenelle stamps so you can see how the letters align. I think the 97 stamp is indeed the  better match! 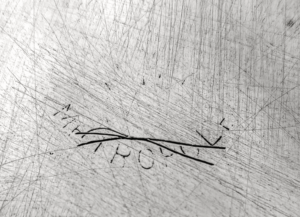 The other stamp says “METROPOLE” and can only be a hotel. There are a few Metropole Hotels which tend to be late 19th century, large, grand, sited in important towns and catering to the carriage trade at a time when most people considered themselves to be lucky to get an annual day trip to the seaside. English cooking was not the joke it was to become for much of the 20th century, cooks would have reckoned their art at least a match for anything French cuisine could offer and well-heeled diners had high expectations.

There is no way I can be sure which hotel this pan came from but it was sold all those years ago in Dorchester and that is only about 30 miles from Bournemouth, which was a very fashionable seaside resort on England’s south coast and had a Metropole Hotel at the right time. There seems no reason why what was for a long time a low-value item should have travelled far.

Bournemouth Metropole Hotel was truly imposing. It opened 1893 and shockingly was destroyed by a direct bomb strike on Sunday 23rd May 1943.

The town’s hotels were used as billets for troops and the Metropole was full of Canadian soldiers and airmen. It seems that this was a targeted attack to kill as many pilots as possible because while aeroplanes could be replaced, training crew takes much longer. The loss of life in the town in this attack was considerable, at least 130 and possibly over 200. Witnesses reported that the Metropole was littered with body parts so no one could be sure of numbers.

This beautiful pan may have been witness to the good times and the bad. In a way it is a memorial to those affected by events.

VFC says: Roger, thank you so much for this inspiring and affecting story. It brings together everything I love about collecting copper: the hunt that turns up a chance find, a pleasant discovery of provenance, and a little research that uncovers some meaningful history. I agree that the best match for your pan’s Jacquotot stamp is the 97 Rue de Grenelle version, which dates your piece to sometime between 1908 and 1914. Congratulations on this lucky find!

If you’d like to read more about the tragic bombing in Bournemouth, please see the Bournemouth Echo’s article in 2018 on the occasion of the 75th anniversary of the 1943 attack, from which I took the photos above.