These very fancy ladies have somehow ended up with the wrong hats.

Don’t get me wrong — I love these pans and I love their lids, but I do not believe they all came into this world together. These lids are not the stick-handled style that is usually provided for a saucepan but instead the close-fitting lids from a set of bombes, molds used to make ice cream and other cold desserts. Take a look at Roger’s guest post on his ice cream bombes to get an idea of what these look like. They’re lovely pieces. One is stamped with *A*2, matching one of the pans.

But alas, the lids do not fit. The *A*2 lid slumps loosely atop the *A*4 pot, and the two unstamped lids would need to be jammed quite firmly atop the smaller two pots.

And for pans these lovely, there will be no jamming of lids. Oh my goodness, no.

These three saucepans were made by Legry, part of a set of pans stamped for a royal owner. (I’ll get to the stamps and history a little later.) They are small — the two smaller pans, the twins, are 11cm in diameter, and the larger is just 12cm. But though small in size they are exquisite in their details.

First, they possess one of my favorite qualities in an antique pot: they are bottom-heavy. The best place to have thick copper is in the base of the pan, where it makes contact with both the heat source and the food. This is where the copper does the bulk of its marvelous work to capture and spread heat so that it can reach the food as quickly and evenly as possible. Early pans were hammered by hand from flat sheets of copper and as a consequence often had thinner sidewalls, but even when machine presses could shape the pans, the best French makers (such as Gaillard, Dehillerin, and Legry) ensured that the base retained more thickness than the sides.

I know these pans are bottom-heavy because I can feel it when I pick them up, but even if I did not have them in hand, their weight would tell me. The 11cm saucepans, at 1220-1250g, and the 12cm, at 1600g, are closer in weight to my modern-era 3mm thick 14cm and 16cm saucepans. This is another reminder that antique pans (that is, pre-WWII) with ho-hum rim measurements can pack a punch under the hood, so to speak. (I maintain a big list of reference measurements for this reason and so you can get an idea of the true effective thickness of a prospective purchase.)

Another interesting quality about these pots is that at some point their iron handles were coated with copper.

Much of it has flaked off, but what remains creates a beautiful effect, almost like a lacy overlay.

The areas of the handle not covered by the copper are also beautiful. The iron is rippled, like the wrinkled skin of an elephant. I hope a reader can suggest why this is. My first thought was that this is a consequence of the pour of metal into the mold that shaped the handle. The handle shafts have strong linear graining, which my research suggests indicates that the metal is wrought iron.

This restoration was done by Val Maguire at Southwest Hand Tinning. The pans were in fine physical shape but needed some cleanup and retinning, and she did beautiful work. (In particular, I am grateful for her preservation of the copper on the handles.) The bright clean tin shows the presence of a tiny mark in the very center of the floor of each pan — the dot, left by the compass the smith used to delineate a circle on the sheet of copper. The dot is a sign of 19th century hand-craftsmanship.

The interior rivets are flattened and nearly flush-set. I believe most of them are original. I see very faint numbers on a few of them, which indicates that these pots were assembled with pre-made rivets numbered to indicate their size. Rivet-making machines were a mid-19th century invention.

The center rivet on this pan looks more prominent than the others and I suspect it is a replacement. The outside head of that rivet also looks slightly larger than the others. It was a nice repair job, but the level of finish is not quite the same as the others.

The pans have two beveled planes around the edge of the base. This beveling is added to help harden the copper at these impact points. Despite this, there are a few small dents, but they do not bother me.

And now that we’ve got the pans and their lids covered (heh), we can turn to the stamps and history.

These pans are stamped to the left of the handle for Legry, located at 2 rue Miromesnil in Paris, the former location of the chaudronnerie Duval. Paul Legry took over the business in July 1896; TJFRANCE has compiled a video history of Legry to which I can add very little, but I will summarize the key points. 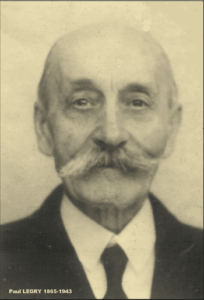 Paul Jean Marie Legry was born in 1865 in Coyolles outside Paris. TJ believes Paul left Coyolles for Paris around 1887 to join his cousin Henri, who had a hardware store at 115 Boulevard Saint-Germain. Paul worked there and at other hardware stores in Paris until his cousin Henri died in February 1896; TJ theorizes that Henri’s death may have given Paul the financial support to buy the Duval business. The last listing I can find for the Legry is dated 1926; by 1935 it had gone. Paul Legry passed away in 1943.

These three pots have the early two-line Legry mark. There is a second stamp that reads “Legry Cuivrerie Standard” but I do not know when that stamp came into use. My best guess is that these pots were made early on — 1896 to the 1910s or so. The other stamps on the pans are quite intriguing. Each pot has a royal coronet, the letter A, and a sequence number (1, 2, or 4).

Sequence numbers are common on sets of cookware in large kitchens, particularly for wealthy or high-ranking owners. And the owner of this pan was high-ranking indeed: my best guess is that this coronet with its strawberry leaves is for a British duke.

But which one? There are three British peerages that begin with the letter A, and here are the gentlemen who held those offices over the time period from 1896 to the 1910s.

So, reader, what do you think?

This poll is no longer accepting votes