The title might ruffle a few noble feathers, but I’m an American, it’s what we did.

VFC says: This guest post was written by Bryan P.

This pan caught my eye because I was looking for a smaller Windsor or splay pan and it has the linear Dehillerin stamp. The stamp is the E. DEHILLERIN, 23mm wide version with address. [VFC says: My estimate is that this is an 1890s to early 1900s stamp.] The dimensions are 18cm wide and 7cm tall.  I purchased it through eBay, and it was an estate sale find by the seller.

From the posting pictures I could see that had a hammered finish, the tin looked like it was still usable, and it had been dented inward.

Once it arrived, I was a little nervous since the handle had poked through the box, but once unpacked there wasn’t any visible damage and I went about washing and polishing it to see what I had. The handle had some surface rust that came off with steel wool.

The handle on this pan is what I think makes it interesting. It still has the casting marks — the gate mark (the slot in the mold into which the molten iron was poured) and vent hole (to allow air to escape the mold as it filled) weren’t removed during the finishing process. 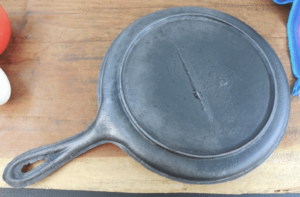 Cast iron is made with a sand mold in which liquid iron needs to be poured into it (or injected into the mold.) The liquid iron then hardens and the mold is removed from around it. In the 1800s the iron was poured in via a line on the bottom of the mold which left the line, or gate mark, on the iron once it hardened…

As technology improved, gate marking was phased out to go to lip injection. In this method the opening to add the liquid iron to the mold was on the lip of the skillet instead of the bottom. Then after the skillet was hardened and removed from the mold the lip is ground down smooth like the rest of the pan.

I think it’s interesting where the gate mark is on the inside of the handle, since from what I can tell the molten iron would have had to rise vertically during the casting process to fill the entire mold.

VFC says: Thank you, Bryan! Clever of you to spot the gate mark and vent hole — I don’t believe I’ve noticed them on pieces in my collection. I’m also curious as to how the positioning of the gate would enable the iron to flow by gravity into all the crevices of the handle mold. Do any readers know how this would be done?