Welcome to the first post in the Diamonds in the Rough series.

One of the most enjoyable aspects of searching for and acquiring antique and vintage copper cookware is the tantalizing possibility of uncovering a “diamond in the rough” — that is, a piece that turns out to be better than its initial appearance would suggest. Like a rough-looking rock that turns out to be a diamond, many high-quality copper pots and pans sit undiscovered and unappreciated, their beauty and history concealed beneath a crust of dirt and tarnish. Because these pieces usually respond so well to restoration, the transformation is profoundly satisfying both for producing a beautiful thing as well as for rendering a useful object once again fit for purpose.

I’d like to use this series of posts to showcase pieces like this, what makes them special, and some tips to help you spot them, too. The first of these stories I’d like to share is this copper saucepan that belongs to reader Bryan P. Here is the main photo from its eBay listing.

This, my friends, is a textbook example of a diamond in the rough. It may not look like much — not gonna lie, that gray color is a little off-putting — but if you know what to look for, you can spot the potential. First, it carries both a maker’s mark for Duparquet as well as two clear owner’s stamps which would likely pique the interest of a reader of this site. Says Bryan, “What attracted me to the pan was the B&O stamp and the ‘Pershing Sq. Savarin’ stamp,” both of which suggest a traceable history for the piece.

The second hint of this piece’s potential took some investigation on Bryan’s part. The seller’s listing focused on the stamps and their implications for the piece’s age and provenance (more on that below), and the listing didn’t include complete measurements. The seller indicated the pan’s weight (15 pounds!) but not its diameter or height. (In my experience, sellers who do not deal regularly with copper may not think to include precise dimensions.) Fortunately, all it took was a quick email and Bryan learned that the pot was 12½ inches diameter by 8 inches tall, corresponding to a 32cm pot. At almost exactly 15 pounds (about 6800g), it was likely around 3mm thick. This is a good serious thickness of copper and adds to its appeal.

I asked Bryan about his decision process for buying this piece. Says Bryan, “The only questions I asked of the seller were the dimensions, since originally, they weren’t listed. From that and based on the weight/reference, I had a reasonable idea as to its thickness. Given the dimensions and weight, I figured once cleaned up the pot could be sold for a profit if I so decided. Beyond that, I liked the historical significance of the stamps. The B&O stamp carries a sense of historical Americana, and I looked up Pershing Square and found the ads listing the opening of the Savarin there and thought this had interesting historical significance. I didn’t have a pot from Duparquet, which meant I was expanding my collection. So I knew it had the copper thickness, it looked dirty as heck which would throw others off, and assumed Erik Undiks at Rocky Mountain Retinning could make it shine.”

Says Bryan, “The pot itself was very dirty based on the pictures when I bought it and I had it sent directly to Erik Undiks. Little did I know that the pan was not only dirty, but I’d failed to notice from the posted pictures that the outside had been tinned as well. Because the exterior was tinned, Erik had to grind away at the tin using different grits, ultimately achieving the gleaming exterior you see.”

So that’s what that flaky gray coating was! We’ve seen external tinning on bain marie pots, but this is by far the largest tin-covered piece I’ve ever seen. As far as I can tell, full external tinning was done to protect the copper. From what did this pot need protection? Was it immersed in liquid? Readers, have any of you seen large tinned pots like this?

Erik’s work to restore the piece was truly transformational. Look at the before and after below of the handle. Says Bryan, “I suspect the rivets are all original, the outer two look like they have been tightened multiple times, which I suspect is a result of the torque of lifting and pouring from the pan.”

The base of the pan looks reasonably flat. I don’t see any major dents or distortions. It’s really in remarkably good shape.

The cleaning also cleared away the grime from the stamps. Erik’s restoration revealed the maker’s mark for “Duparquet 110 W 22nd Street New York” an “DH&M CO” cast into the underside of the iron handle.

Duparquet, Huot & Moneuse was an American coppersmith that traces its history to 1852. The earliest address I could find was 24 & 26 Wooster Street, then 43 & 45 Wooster Street (my research confirms as early as 1889 to 1915). I first see the 110 W 22nd Street address in 1917, and I believe they used this location up until the firm was sold in 1937. The W 22nd Street address in the stamp on this piece suggests that it was made in that twenty-year period. 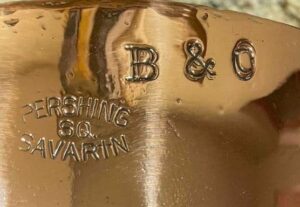 The pot also carries two owner’s marks as shown on the right. “B&O” is for the Baltimore & Ohio Railroad, the oldest railway line in the United States. It opened its first line of service in 1830 and eventually connected thirteen states in the northeastern region of the country. At its peak in the 1920s through the 1940s, B&O offered exquisite dining experiences on certain of its trains, and that seems most likely where this pot saw service.

The “Pershing Square Savarin” was one of chain of restaurants named for the 19th century French gastronome Jean Anthelme Brillat-Savarin. The first property in New York opened in 1888 at the Equitable Building at 120 Broadway; by 1929, there were twenty Savarin-branded dining establishments across the country. The restaurant at Pershing Square in New York City opened in 1924 as “an uptown reproduction of the famous Cafe Savarin at 120 Broadway.” I see mentions of it from 1923 to 1925, but curiously, nothing after that. I don’t know for how long the restaurant was open at that location.

None of the three stamps gives a precise time window. I don’t know whether the Savarin or B&O stamp came first, or how long the pot was in service with each owner. But the three marks converge in the 1920s and 1930s and my assessment is this is when this pot was made and saw its its first period of use.

What makes this a diamond in the rough?

The notion of a “diamond in the rough” is subjective, of course — there are multiple kinds of diamonds, so to speak, and each of us has our own ideas about which ones we cherish the most. The type of diamond that I believe that Bryan has found here a high-quality antique piece in usable condition with an interesting provenance that potentially increases its resale value.

First, the pot is 3mm thick. In my opinion and experience, three really is a magic number for copper: it’s the threshold between consumer grade and professional grade, and also between high-quality and exceptional. Large pots like this one tend to be 3mm or more due to their sheer size — they need a decent thickness of copper to maintain structural integrity — and sometimes thinner pots don’t survive as well (here’s a 2.5mm 40cm stewpot with failing dovetails).

Second, the pot is in good physical condition. It looked to be close to round in the listing photos, with no obvious dents or repairs. As for the flaky gray coating, look at the photo above of the unrestored base of the pan — bright copper is showing through on one edge. This suggests that the gray coloration was a surface phenomenon that hadn’t affected the copper, and that turned out to be the case. The cast iron handle had surface rust but didn’t show deeper corrosion. These were all signs that the pot was sound and retained usability, and much as I love my fragile display pieces, I think that antique copper in cooking shape are the most precious gems of all.

Third, the pot has maker and owner stamps that increase its potential resale value. Stamps don’t affect how a pot performs, of course, but they can enhance a pot’s collectibility. If Bryan decides to sell this piece, he can specify its maker, an approximate age, and two traceable prior owners from the pre-WWII period. In my experience, these qualities can draw buyer interest to a piece.

If you’re looking for more rough diamonds like this one, one more tip I have for you is to shop by weight. In my experience this is the best way to spot heavy copper even when the seller doesn’t provide much information about the piece. (I’ve compiled a table of reference weights and measurements to help.)

Thanks again to Bryan for sharing this diamond in the rough, and to Erik Undiks at Rocky Mountain Retinning for the beautiful restoration.

Tags: diamonds in the rough