Home > Buyer's Guide > Buying online > DITR: The craziest buy I ever made

DITR: The craziest buy I ever made


Oh how I wish I could show you the original eBay listing.

This was early on when I was just starting to buy copper and sometime in the interim eBay purged its records. I can’t show you what the listing said in full but the title was “E. DEhillerin PARIS cooking Pans set 4” for £500. From what I recall of the description, it amounted to “Four copper pans, heavy and old, need cleaning.” The seller listed each piece — a large sauté pan and three smaller saucepans — with approximate measurements in inches but no weights. All I really had to go on were the photographs, and fortunately I did save those before eBay deleted them. Here they all are, full-size in all their glory.

And with that, you know about as much as I knew when I made the decision to buy them.

That big sauté pan with the helper handle is what drew my attention to the listing. It’s clearly the gem of the group and the only pan the seller saw fit to show in close-up. The other three pans were unknowns: I didn’t know anything about them aside from their existence and a general idea of their dimensions. But I wanted that big pan enough that I was willing to roll the dice on the others. At that time £500 was almost US$800 and that is a lot of money, but for four pans — one of which looked to be a large antique — it seemed like a reasonable gamble to take.

They arrived in a box that was not well-packed. The pans were nested inside each other, metal to metal, with the handles lashed together with plastic zip-ties. There was no cushioning around the pans and they were rattling around inside the box. The box itself was not structurally reinforced — as you can see from the photo below, one corner of the box has collapsed because there’s nothing inside it to maintain the shape. It is a miracle that it arrived intact at all. (I wish I had taken more pictures but this was well before I started this site and I just snapped a photo because I was excited to open the box.)

Reader, I was unbelievably lucky. Not only did the pans emerge unscathed from their bumpy ride across the pond, but they also turned out to be wonderful. Here they are today: At the back is that 36cm sauté with helper handle; on the right, a 26cm no-name sauté pan that outweighs a 3.5mm piece; and on the left, two 20cm windsors (not saucepans as described) with early Dehillerin and Jacquotot stamps. (Needless to say, the listing made no mention of these stamps at all.) 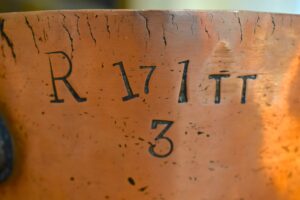 You may already have recognized this large sauté pan: it’s this 36cm sauté with helper handle, and it is one of my absolute favorite pans in my whole collection. I find it to be ridiculously handsome. It’s like having Clark Gable in my kitchen, all twinkles and charisma. As you can see I haven’t restored it — it’s in the same condition as it was when I bought it, plus a little tarnish. The tin is a light pewter color with some surface oxidation but I do not have plans to retin it. (Were I to cook on this, I’d give it a brisk scrub to dislodge the oxidation, but believe it or not the tin does’t look that bad to me.) I want to preserve the patina as much as possible. I mean, would you give Clark Gable a makeover? Absolutely not. He just gets better with age.

I bought the set of four for this one pan and to this day I think it was absolutely worth it. This pan is so photogenic that I have used it again and again to illustrate my ideal antique copper pan with character. Its spray of stamps includes the British Transport Commission Catering Service, marking it as a likely former railway pan, and the letters and numbers probably refer to trains or locations where it served. It has the thick smooth iron handle that I associate with turn-of-the-century Gaillard and Dehillerin, though it may in fact be the work of an unnamed Villedieu maker. In any event it’s just a spectacular piece. I can’t believe this was one of my very first copper purchases.

The other pans were an unexpectedly pleasant surprise. 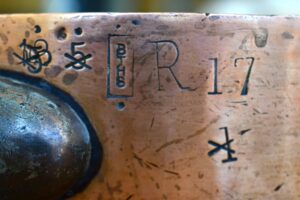 The smaller sauté pan is this 26cm. It’s 3mm at the rim but by weight it is a shade heavier than another sauté I measured at a uniform 3.5mm. This makes it not only a diamond in the rough but also a hidden gem: it’s thick in the base, providing the heat management of thick copper with a little weight trimmed off the sidewalls.

The interior was nearly pitch black in the listing photos and so I sent this one to be retinned straight away. This is a cooking pan for me, a workhorse size for the home cook, steady and smooth like a V6-engined luxury sedan. 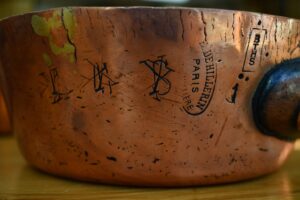 The two 20cm windsors involve a bit of a story.

So far this is a pretty self-congratulatory post — “look at me and how lucky I am!” — but the full story is not so positive. I’m grateful for my beginner’s luck in buying these pans but I also made a serious mistake after I bought them.

These two windsors are a matched set: though made by different makers (Dehillerin and Jacquotot), they are likely from the same period (early 1900s) and have very similar owner’s marks on them (also similar to the big sauté above, making them all likely sold-off inventory from British Rail). But the two windsors look very different because I had one of them restored, and it’s that restoration that is the problem.

The Jacquotot windsor was among the group that were victims of bad tinning. Thinking I could save some money, I did not pack them off to a professional tinner but instead took them to a local metalworking shop to be retinned. They were returned to me lined with “tinning compound” that returned a positive result with my lead testing kit. The shop owner had outsourced the work to “a local gentleman” and to her credit was horrified to learn that the materials used were not food-safe. She instantly refunded my money and that was the right thing to do. I had the pans retinned at East Coast Tinning and they are in fine cooking shape now.

However, the tin was only part of the problem. The retinner also polished the pieces so thoroughly that he erased many of the stamps, including the Jacquotot maker’s mark. (The Gaillard windsor shown in the Bad Tin post is another victim.)

Here’s what’s left of it.

But it’s not just about the loss of the stamp. The character that I love is gone. Because I only subjected the Jacquotot to this mistreatment — thank goodness — you can see the difference when you set it side by side with its unrestored brother, the Dehillerin.

Here are some more comparisons. I don’t think I need to tell you which is which.

It’s a little hard for me to look at these photos. It’s like those examples of a well-meaning person who tries to restore a Renaissance fresco in a European church and paints a cartoonish face over the beautiful faded work of an old master. This experience is why I beat the drum again and again: know your tinner. It’s perfectly fine if you want your old copper smoothed out and made to look brand-new again, but it’s pretty devastating if you don’t want that and it gets smoothed out anyway. I learned a few lessons here: first, I care enough about the outcome of a restoration to work with copper specialists even though it is more expensive; second, I don’t just drop off copper at the tinner like I’d leave a laundry bag for the dry cleaner — I communicate my expectations. Do I want the exterior cleaned but left unpolished, to preserve the character? I say so up front, because once that buffer wheel hits the exterior, I can’t ever get that copper back.

Whew. This post has been an emotional rollercoaster! But I’d like to end it on a high note. Taking these pieces out and looking at them together has revealed something that I had not noticed: the large sauté and the two windsors have some similar stamps. All three carry the same vertical BTHS mark for British Transport Hotel Services, and the two windsors also carry “LMS” and “LMS HOTELS,” partially obliterated with X’s. This can only be the London Midland and Scottish Railway, one of the “big four” railway entities in Britain from 1921 until 1948 when all operations were consolidated under British Rail. This rail service covered England, Northern Ireland, Scotland, and Wales, and also managed forty hotels across its operating regions. (I am indebted also to the LMS Society dedicated to its history and to the preservation of a treasure trove of documentary information.)

After spending quite some time spelunking down the rabbit hole of LMS research, this is what I can offer.

This is not conclusive research but it suggests that the sauté and there two windsors were working pans in the 1920s and beyond — hard-working, to judge by their condition now. The 26cm sauté has no connection to LMS that I can detect and its craftsmanship looks later to me — 1930s to 1940s, possibly even post-WWII.

What makes these pans diamonds in the rough?

For me, these pans fall into the category of Boy did I get lucky. I wish I could say I bought them with the gimlet eye and steady hand of the experienced collector but really I took a financial risk for a pan I took a shine to, and the ones that came along with it were a very pleasant bonus.

Here’s what I’ve learned from this experience. 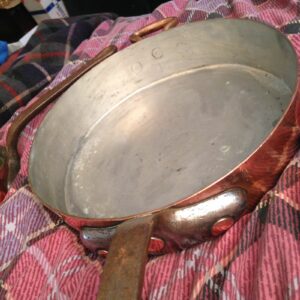 If the big antiques are your thing, you can learn to spot the look. Here’s the listing photo of the big sauté pan again, and in my opinion it has everything I want to see. The handle has the big pillowy baseplate I see on Gaillard and Dehillerin that I date to the turn of the 20th century. The metal of the handle is a soft pewter color, another characteristic of high-quality “golden age” copper pans.

Helper handles on big sautés imply quality. The purpose of this second handle, positioned opposite the main handle, is to make a heavy pan easier to maneuver. In my experience a helper handle is a promising sign that a pan is hefty and also makes it easier to use.

The antique railway pans I’ve come across tend to be high quality. Dining cars in the golden age of European rail service offered high-end French cuisine, and from what I can see, they equipped their kitchens with thick well-made pieces that were built to last. They also tend to be well-used, sometimes to the point of damage. But if you appreciate copper with character, the railway pans I’ve encountered have personality to spare. (Look for the “WL” of Wagons-Lits in particular.)

The interesting question for me is, would I buy these again today given the experience I’ve accumulated? Truthfully, I think I would. Present-day me might have asked the seller more questions — more precise dimensions and weights on the smaller pieces, for example, to give me an idea of their quality — but really, it was love at first sight with that big sauté. Sometimes I think that all this knowledge I’ve tried to acquire is really just a technique to justify what my heart wants to do!

Tags: before and after, diamonds in the rough