Is this ladle antique or a replica?; a theory on the origin of an all-copper pot; a stockpot with an intriguing stamp.

I am an avid collector of antique tools and rarely buy copper but I was curious about this ladle so I threw caution to the wind and splashed out 5 euros.

This ladle is made from two pieces of dovetailed copper which are in my opinion hand cut; I believe that the rivets are handmade, they are certainly hand fitted and hammered. The patina and colour lead me to think that it’s an old piece but I’m not totally happy about the handle which looks to be made to look old rather than be old. There are half cross hatches on the handle, if it was a tree of life I would have been more convinced about the authenticity and age. Another doubt I have is the form of the letter stamps used for the quantity of contents, they don’t look to be a very old style but this label could have been added at any time (and I am used to collecting 18th century tools so I lack knowledge of more recent marks). The owners or manufacturers initials seem to be of an older style of stamp.

I would greatly appreciate your opinion on the age of this utensil.

What a great question. I am inclined to see this as a genuine antique for a few reasons. First, the forged handle is too nice. And I don’t mean “nice” in the sense of “perfect” — for example, I don’t see a tree of life pattern on the surface but rather the diagonal tracks of a flat hammer head that the smith didn’t bother trying to flatten out — but in the sense of how time-consuming it was to make. In my experience, replica forged iron items are machine-stamped and then given a perfunctory hand-finishing to make them look “authentic” — adding some picturesque dents here and there, maybe softening up some areas where the die stamp left a sharp edge. By contrast, the handle on this piece looks to me to have been worked over every surface from tip to tail, and that takes a lot of time.

Second, the fact that a round-bottom piece this small is dovetailed is another indicator of painstaking construction. Imagine how challenging it was to interleave the pieces! Most dovetail seams are on a flat plane — around the base and up the side. Getting seams to align on a curve correctly takes time — hammering one into shape, comparing it to the other, making adjustments, back and forth. By comparison, it would take a second to punch out this shape in a machine press or a few minutes to spin it on a lathe, producing a smooth one-piece shape. Even welding the seams would be preferable to hand-hammering all the edges together; if you look inside, the inner leaves of the dovetail look to be nice and flat but they haven’t been hammered, because how do you get a hammer in there? It would be much faster to shape this piece on a machine.

The point I’m trying to make here is that, to my mind, the business model of the replica industry is to undercut the authentic market by reducing manufacturing expense. But when I look at this piece, I don’t see any modern shortcuts taken. I think the irregularities we see — the asymmetric rivet holes, the uneven hammering on the handle — are legitimate consequences of 19th century hand-work.

Just as you did, I also noted the modern-looking lettering of the brass volume plate and the initials. The brass plate could have been added later, but that is not my immediate assumption; to my eye, it looks of a piece with the rest of it. The metric system was established in France in 1795 so it’s conceivable that this could have been created in the early 1800s. (Come to think for it, I would expect a bunch of these measuring cups to have been made at the time just to help people adopt the new system.) I also note that the initials stamped near the rim look to be the same typeface as the lettering on the volume label, and my guess is that they are contemporaneous.

So, in sum: this piece was made with 19th century techniques. Is it 19th century? That would be the simplest conclusion. Could it have been made by hand in a backwater village in the 20th century by a skilled coppersmith who didn’t have access to the machinery that would have made this piece trivial work? Sure. But is it a 20th century replica? I don’t think so, because in my opinion it’s made with techniques that are too costly to turn a profit.

Readers, M. and I would welcome more opinions and insight here.  What do you think?

Hi there, I have a question on a pot I recently bought. It was a total chance but I thought what the heck. It’s older… it is to be because of the dovetails and the dot! That I learned form your site. It’s fairly large. About 12” diameter, and 11” high. The part that gets me is the handle. The whole thing looks like copper. It attaches with that heart shaped attachment with three copper rivets. This handle seems to be shaped like an iron one but it’s copper. The end is rounded without any type of hole or hanging device. Might you be able to direct me somewhere to learn about? Thanks again for any help.

Thank you for the photos and info. I have seen pieces like this but I don’t have any positive information about when they were made or by whom.

But the all-copper construction suggests that this piece was made without the benefit of a supply of mass-produced cast-metal handles. One possibility is that the piece itself is quite old — pre-1800 or so, before the industrial revolution brought large-scale metal foundries to Europe. But the craftsmanship here is too fine to be that of an itinerant tinker, and there are too many of these pieces of too consistent of a design. I’m inclined instead to think that this is 19th century to early 20th century work from a region that had skilled craftsmen located too far from the Western European population centers and their large metal foundries.

The most intriguing lead I have is an eBay listing of a similar piece a while back that said that the pot in question was Russian. (Unfortunately I’ve lost the listing itself.) This makes some sense to me. I see many of these pieces up for sale in the US (no fewer than five on eBay as I write this), which benefited from substantial Russian and Eastern European immigration during the 19th and 20th centuries. Russia in the 19th century was behind Europe in its industrial development, and may have reduced coppersmiths’ access to cast pieces.

Another possibility is that the pieces are very early American, but I’m not so confident of this. I would expect to see this type of pre-industrial craftsmanship during the Revolutionary period, but American industry developed rapidly in the 19th century, at the same pace as Western Europe. I would expect all-copper pieces made in America to be quite primitive — pre-1800 — and the pieces that have survived are truly ancient. This pot of yours looks too fresh to my eye to be that old.

(Notably, I do not see pieces like this from UK or France-based sellers who haunt the brocantes, nor on leboncoin.fr, my go-to resource for “things French people are finding in their attics and barns.” Absence is not dispositive proof, of course, but this does suggest to me that these pieces didn’t originate from France.)

So this is my unsatisfactory answer. I think it’s 19th century, maybe even early 20th, and my best guess is that it’s Russian or Eastern European. Readers, what you do think? Have you seen pieces like this with stamps or other history that you can connect to a specific era or maker?

I have a J & E Gaillard 36cm copper pot with brass handles. It also has other stamps on it, and I would really appreciate more info about it, and particularly whether it should be polished or not, and how? It looks like it could have been for army wartime use, being quite roughed up. It’s all solid and sound but has taken rough treatment, the sort it might have experienced in the trenches of WW1, to create scratches and slight dents etc. I acquired it from a scrap dealer, rescuing it before it was sent in for metal recovery!

What a beautiful piece. The stamp is one I have tentatively dated to between 1903 to 1919 or so. The CGT stamp is lovely but I’m not sure it’s enough information for an identification. It could be the initials of an individual or an institutional owner. 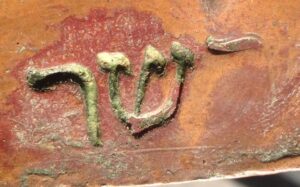 But the smaller stamp is quite intriguing. I flipped the photo around (as shown at right) and it looks like Hebrew to me — I don’t speak the language, but the characters resemble shin (שׁ) and resh (ר). I plugged those characters into Google Translate and the word returned was “minister” but I don’t know the context. There is a third mark there that looks intentional but I am not sure what it is.

If this is in fact Hebrew, I would not be surprised — I have seen the Star of David stamped on copper pots and I theorize that this was done to mark pots for kosher cooking. If these characters are Hebrew, then the kitchen staff must have been able to read it. Was this pot part of the batterie de cuisine of a Jewish household?

Readers, can you help here? Do you think these are Hebrew characters? If so, what might they mean on this pot?

Update: Reader G. very graciously contacted me with more information: “Regarding your post with the Gaillard pot that has Hebrew letters on it, the letters say כשר which means kosher in Hebrew. The כ is a bit faded but it’s there. Observing Jews only cook in kosher utensils which means that nothing non kosher has been cooked in them.”

Letter writers have granted me permission to share their questions. Some emails may be lightly edited for clarity or to condense multiple messages into a single question. Names and identifying details have been obscured for privacy.