Legry in the 20th century was born from Duval in the 19th.

In my experience it’s pretty rare to find copper stamped for Duval. I suspect that they did not put their name on much of their work at all — the only Duval stamp I have seen is marked with the address 2 rue de Miromesnil, and this was the firm’s address for just ten years at the very end of its time.

The first chaudronnerie Duval I can find in Paris is in 1842 at rue Popincourt. In 1852, the chaudronnerie relocated to 11 and 13 passage Vaucanson, where it remained for four years until 1856, when the listing at that location ends. From 1857 to 1860, there is chaudronnerie Duval et David at 3 Rue Greffuhle, but as of 1861, there was no chaudronnerie Duval listed in Paris. Duval is a fairly common name in France and in Paris in the 19th century and it’s entirely possible that this was a separate family and venture from the Duval that was to come.

The next chaudronnerie Duval appears in the listings for 1863. (Unfortunately I do not know if there is a family relationship with the prior establishments on passage Vaucanson or rue Greffuhle; it certainly seems possible but I have no documentary evidence of this.) This chaudronnerie was located at 11 rue Mogador in 1863 and 1864. The next available almanac is for the year 1870, and the address had changed from 11 to 7 rue Mogador — a short move, or perhaps simply a renumbering of the street. This chaudronnerie was listed in operation at 7 rue Mogador until 1885.

For a brief period — 1874 to 1881 — there was a second chaudronnerie for Jean Duval at 7 avenue de Choisy. I am tempted to think this was Jean Léonard Marie Duval (1805/7-?), father of Alfred Duval, but the timing doesn’t seem quite right. In 1874, this Jean Duval would have been at least 67 years old, perhaps not the optimal time to launch a new venture. But perhaps he had provided his name and capital to his son Alfred? I do not know. In any event, the chaudronnerie Jean Duval was only listed for a short period of time before vanishing in 1882.

In 1885 begins the era of the chaudronnerie Duval at rue de Miromesnil. I am confident I know who ran it: Alfred Marie Duval (1834-1894), son of Jean Léonard Duval.

Reader Chris C. has been kind enough to share some photos of a beautiful Duval casserole à glacer. This is a saucepan made with a close-fitting lid that keeps moisture inside, perfect for braising meat and vegetables. Of note, this piece appears to have cast iron handles, which suggests that Duval was in the process of transitioning from wrought to cast iron handles.

This is a lovely piece and I’m grateful to Chris for sharing it with us.

Alfred’s wife Éleonore Marina Lavarenne passed away in 1892, and he passed away just two years later in 1894. According to TJFRANCE, the death of both Alfred and Éleonore marked the end of the chaudronnerie Duval. I listed in the 1896 commercial directory, but I believe that was based on data collected in 1895; it’s possible the chaudronnerie continued for a short time, but the 1896 edition of the business almanac is the last listing I can find.

In 1896 the chaudronnerie Duval was purchased by Paul Legry.

There is only one Duval stamp I have been able to find, and it’s on my 40cm daubière. It is quite small and reads simply “Duval 2.R.MIROMESNIL”. My belief is that the business maintained a workshop at number 17 for a period of time while the storefront was a number 2, so copper with this stamp could be from any time between 1885 and 1894 or so, the year of Alfred’s death and presumably the last year of production under the Duval name.

This maker is a favorite of TJFRANCE, who has compiled a video history of Legry. I do not have much to add to TJ’s research but I will summarize what I know about his life. Paul Jean Marie Legry was born in 1865 in Coyolles, a village outside Paris. TJ believes Paul left Coyolles for Paris around 1887 to join his cousin Henri who had a housewares store at 115 Boulevard Saint-Germain. I found “Legry (H.), articles de menage, boulevard Saint-Germain, 115″ in 1891, but also “Legris, tourneur en cuivre, 145 rue du Temple.” The names Legris and Legry seem to have been somewhat interchangeable in the French listings and it’s possible that this tourneur — who used a lathe to spin-shape copper — was a member of the family who gave young Paul some training. 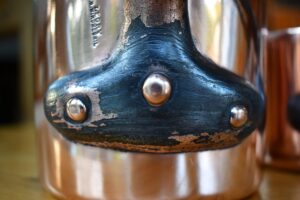 Paul’s cousin Henri, proprietor of the housewares store, died in February 1896, and TJ theorizes that Henri’s death may have given Paul the financial resources to start his own venture. Paul Legry purchased the Duval business in 1896. In 1897 (and 1898) the former chaudronnerie Duval was erroneously listed under the name “Legris,” but by 1899 the company was listed as “Legry, batterie de cuisine et articles de menage” and kept that spelling thereafter. 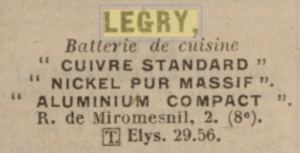 Sometime between 1922 and 1925 — there is a gap in the records — the Legry business was transformed: it expanded beyond spécialité de cuivrerie martelée to offer aluminum and nickel cookware as well. This seems to be an important change but I am not entirely sure I know what it signifies. Nickel pur massif refers to solid nickel cookware, a popular trend in the 1890s to 1930s until the outbreak of war redirected all nickel production to stainless steel. (While it was being produced, nickel was described as “the perfect metal” because it was durable and the pans didn’t require retinning.) Aluminium compact is a little more ambiguous to me. “Compact” in French means the same thing as it does in English — small — and I’m not sure what it means in this context. Small aluminum items? Lightweight pieces? I’m not sure. But the most pertinent to my interests is the phrase cuivre standard: literally, standard copper. I don’t know what this means. I suspect “standard” is used here to denote reliable quality, but that is a guess.

The last business listing I can find for Legry on Miromesnil is in 1932; the next record I can consult is in 1935 and the company is not listed. Paul Legry passed away in 1943 at the age of 78.

I am aware of three Legry stamps, and I offer my speculation as to when they were active. 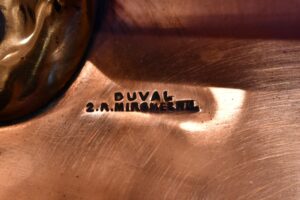 This is a simple two-line text mark that reads “LEGRY 2.R.MIROMESNIL”. It is strikingly similar to the Duval stamp, so much so that I am inclined to think it was in use immediately after Paul Legry acquired Duval in 1896. 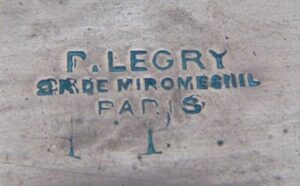 This second stamp is quite rare — I have only seen it once, on a large daubière. It is a three-line text mark that reads “P. LEGRY 2 R. DE MIROMESNIL PARIS”.

At the moment I don’t know where this stamp falls in the timeline. Typographically, it is a departure from the twin two-line Duval/Legry marks above: the typeface of the “P. LEGRY” is sans-serif; the street is “R. DE MIROMESNIL”; and of course there is the addition of the third line “PARIS.”

What to make of this stamp’s design and rarity? With only one example piece — a large dovetailed daubière — I can’t make comparisons to other Legry pieces. As above, I speculate that the two-line Legry mark followed on the heels of the two-line Legry mark, which suggests that this mark came along later. But again, this is speculation at this time. If you spot more examples of this mark, please bring them to my attention so we can examine them.

My thanks to readers Elsa and Matt M. for alerting me to the daubière example so I could capture this very rare stamp.

I believe this is the later version of Legry stamp, using the term cuivrerie standard that I first see circa 1923-1925. Again, I don’t know exactly what year this would have come into use. I know the company was operating until 1932 but as of 1935 it was no longer listed.

I hope this is helpful to you! If you are familiar with more of the Duval and Legry history I’d be very grateful for help to improve this guide.