For me, this marque remains the most enigmatic of all the French makers.

I am deeply grateful to Jean-Philippe Jacquotot-Carisé for his generous contributions to this history.

The founder of chaudronnerie Jacquotot was Jean-Baptiste Jacquotot, born on Christmas Day in 1872. The first official record I can find for him is in 1908, when his workshop was located at 97 Rue de Grenelle.

Around 1914 he moved the chaudronnerie to 130 Rue de Grenelle and began a joint venture with “A. Dehillerin.” I’m not sure who this Dehillerin could be — of course it was a member of the de Hillerin family, but which one? Augustine de Hillerin, widow of founder Eugène, took over the running of the store after Eugène’s sudden death in 1902, but there was also her daughter Andrée. In any event, this association lasted until around 1921; in 1922, Jean-Baptiste expanded into 128 and 130 Rue de Grenelle and began to run the company under his own name.

Below at left is an undated photo from the Jacquotot family collection that depicts young Jean-Baptiste, hammer in hand, at the start of his career. (This image is captured on a glass plate, a technology used into the late 1920s.) Below on the right is the frontispiece for a Jacquotot catalog during the Rue de Grenelle era.

Jean-Baptiste and his wife Pauline had a son, Alfred Louis, in 1903. Alfred enlisted in the army at the very end of World War I; after the war, he worked in Marseille for a few years as a dockhand before returning to Paris to join his father’s business. In the early 1920s he made the acquaintance of Germaine Léonie Ernestine Bouvier (1897-1990) whose family had a moving company with a warehouse at 77 Rue Damesme. Alfred and Germaine were married in 1928, and Jean-Baptiste negotiated the use of the Bouvier family’s large warehouse as a workshop for the growing business. Germaine had been a secretary since 1918 and after her marriage to Alfred, she joined Jacquotot and took on the administrative work. Alfred and Germaine’s daughter Janine Jaquotot (Jean-Philippe’s mother) was born in 1931.

Jean-Philippe shared the photos below of an original painting by the French painter Louis Toffoli (1907-1999) dedicated by the artist to Jean-Baptiste Jacquotot. Toffoli came to Paris in 1930 and it is not hard to imagine that his path crossed with Jean-Baptiste. The painting is entitled “Retinning and repairing a copper pot” and the dedication reads “One of the best of them all, J. Jacquotot, tinner.”

1939 brought war to France and forced change at Jacquotot as well. Jean-Baptiste and his wife Pauline retired and handed the company over to Alfred and Germaine. The family closed the store at 128 and 130 Rue de Grenelle in downtown Paris and moved the business to 77 Rue Damesme. Jacquotot was stretched thin, according to M. Jacquotot-Carisé, but managed to survive:

During the war, many young workers went to the front and were taken prisoner. The majority of those who stayed had to enter the service du travail obligatoire (STO, a compulsory labor service) in Germany. From then on, the few that remained were the “old ones” — hence the presence until the very beginning of the 1940s of Jean-Baptiste.

But the company, like many others, operated minimally to meet the needs of the restaurants that stayed open. Upon liberation, those who were able and wanted to resume their post were taken back. Then hiring took place with the resumption of all so-called “métiers de bouche” [professions in food preparation]. At the same time, hospitals and government departments — all of which had their own kitchens and kitchen staff — became customers.

The late 1940s until 1974 were glorious years for France and also for Jacquotot.

It was the recovery after the war and there was no lack of work. We were hiring — so much so that at Jacquotot there were two workshops at 77 rue Damesme: one for saucepans of all shapes and sizes, and a woodworking shop where we produced all the professional kitchen furniture as well as countertops for bars and restaurants (those called “zinc” could also be copper), fully equipped with built-in fridge. The premises were quite large, U-shaped with a paved courtyard in which the vans and two cars were held. (Don’t forget that it had been the Bouvier furniture mover who occupied these premises before Jacquotot.) 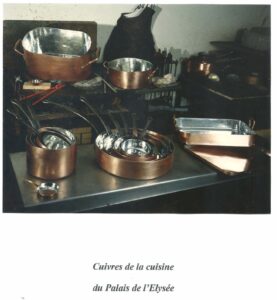 All of our clients resided in France and almost 90% in the Paris region; at the time there were very few large restaurants in the provinces. The customers included the more or less “grand” classic restaurants; the canteens and restaurants of hospitals and ministries; the private restaurant of the Elysée Palace [see photo at right], the Senate, and the Chamber of Deputies; and the “grands bourgeois” — individuals rich enough to have a chef at home in their Parisian domicile. Among these was an English prince who had married an American!

Jean-Baptiste passed away in 1955, followed by his wife Pauline a decade later in 1966; under the leadership of Alfred and Germaine, the company flourished as the French economy recovered and prospered. But the company did not pursue the burgeoning post-war export market in the United States, unlike Mauviel and other makers.

We practically did not export at all: our customers bought in France and left with their equipment. For us they were individuals, and the quantities did not suggest resale in the USA. In fact, it was the chefs who came to us, coming to 77 rue Damesme with a clerk and, if necessary, the equivalent of the financial manager (if down payments were necessary). Then, depending on the deadlines, it was Jacquotot who delivered products to them.

As far as maintenance was concerned, the scheme was almost identical: the chef would call, and we would send a van with two workers who collected the equipment to be repaired and brought it back to 77 rue Damesme. Depending on the stock at the customer (the majority of kitchens rotated two or three sets of pans), during this trip to pick up items needing work we also brought a replacement set so that the kitchen could continue without interruption.

Simple and efficient for the customer.

Jean-Philippe marks the end of this era of growth with the year 1974, when world events and France’s own economic policy brought post-war expansionism to an end.

Mentalities began to change and evolve, modernism and the economy became key words even for restaurants and canteens. We were able to continue with sales and maintenance, but very quickly the joinery workshops closed, and Jacquotot like the two others limited themselves to all kitchen equipment.

In addition, competition had arisen with small craftsmen in the provinces doing tinning at very low prices (not having the same costs, among other things) but with lower quality, which seemed to be sufficient for some customers.

The 1990s was a period of change for Jacquotot. According to Jean-Philippe, the company was forced out of the 77 Rue Damesme workshop due to concerns about the industrial chemicals involved in metalworking; indeed, Parisian cadastral records show that “two one-story buildings for residential and industrial premises, vacant and unoccupied” at 77 Rue Damesme were demolished in October 1990. The family relocated from Paris to Plaisir just west of Versailles. The company no longer manufactured copper but turned to retinning and refurbishing it. Alfred passed away in 1991 and his daughter Janine took over the firm. The company’s specialty was producing an exceptional mirror polish as shown in the photo below. 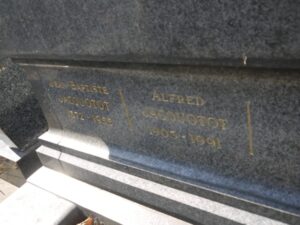 According to the family, the company finally closed its doors in 2000.

There are nine versions of Jacquotot stamp and I offer these tentative date ranges based on information I’ve been able to confirm online. (My thanks as always to readers who reach out to me with examples that they do not see represented here — I am indebted to you for filling in the blank spots! Thank you!)