Havard is one of the few 19th-century Villedieu coppersmiths that survives to this day.

Normandy is named for the Norsemen — Vikings — who invaded the region repeatedly from the end of the 8th century through the 12th century, and Håvard is a Norwegian name. I can find Havards in Normandy in online genealogical records as far back as the 16th century and I’m willing to bet that the family’s history goes back further than that. In 1855, of 69 chaudronniers-poêliers listed in Villedieu, eleven included Havards; in 1898, Havard was named as one of the five grandes familles of Villedieu along with Loyer, Villain, Huard, and Le Moyne (Lemonnier).

The bell-making Fonderie Cornille-Havard side of the family traces its history to Adolphe Havard who in 1865 took over a moribund bell foundry outside Villedieu and re-established it at a newly-built workshop. In 1900, Adolphe’s son-in-law Léon Cornille took over the business, and his daughter Marguerite Cornille-Havard followed in his footsteps. In 1981, the family sold the business to Luigi and Françoise Bergamo who operate the foundry to this day. 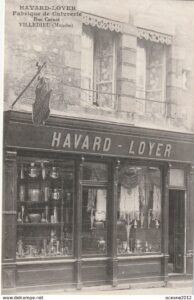 At the end of the 19th century, while Adolphe Havard and Léon Cornille were forging bells, there were at least three other branches of Havards working with copper. Of these, I believe that Eugène-François Havard (b. 1856) built the firm that made copper cookware under the Havard name in the 20th century.

Eugène-François and his wife Marie Lodoïska Loyer built Havard-Loyer, a chaudronnerie that also produced products for the garderobe — sinks and toilets. (We owe Havard-Loyer a debt of gratitude for patenting an early flush toilet.) The firm had a presence in Paris and a shop on Rue Carnot in Villedieu. (Based on the similarity in façades, I believe this shop is currently Cuivrerie Matillon at 3 Rue Carnot.) After Eugène-François passed away in 1911, his son Eugène-Jules Havard (1887-1973) joined the firm but was quickly called to serve in the war from 1914 to 1919. 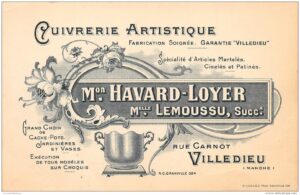 My hypothesis is that the Havard family divested itself of that retail storefront to shift their focus to making copper, because Eugène-Jules continued to make copper as Maison Havard (Eugène) Fils. About ten years later, in December 1935, Eugène took a step to expand his business: he formed the société à responsabilité limitée (SARL, equivalent to a limited liability company) Eugène Havard & Cie with a Paris-based partner named Victor Anger. The official company filing shows that Eugène brought to the partnership four things of value from his existing business: his “clientele and goodwill; the name of the business and the positive associations with it; organization and commercial relations; [and] archives and various documents,” cumulatively valued at 50,000 francs. Victor Anger, as co-founder, contributed another 50,000 francs in cash. While Eugene would run the business, Victor’s duties were loosely defined as “customer relations”; my guess is that he was more of an investor whose contribution helped meet capital requirements and gave Eugène some working funds. In any event, Eugène and Victor severed their ten-year agreement in March 1939 after only three years. No debt or conditions of financial settlement were mentioned in the dissolution notice, suggesting to me that Eugène was able to buy Victor out within just a few years.

I don’t know much about the company’s history after 1939. Eugène Havard & Cie operated in Villedieu at Rue Docteur Havard and Rue du Bourg l’Abbesse, as well as in Saultchevreuil du Tronchet just south of town. At some point the company became known as Établissements Havard et fils, perhaps around the time of Eugène’s death in 1973. Établissements Havard et fils persisted at least into the 1980s but by 2001 appears to have been absorbed by Fonderie Cornille Havard. At this moment, Havard cookware is sold at the Cornille Havard factory store attached to the bell foundry in Villedieu.

I have found nine different Havard stamp designs, four of which appear to be variations on a design featuring the firm’s Viking ship logo. I will apologize to you right up front: the value of this survey is limited because I don’t know the exact time periods for each one. Seeing all the stamps together, though, tempts me to speculate on their relative age (a temptation I am unable to resist). I’ve reached out to Cornille-Havard to ask for more information on their production and will update this if and when I learn more.

One distinctive element of Havard cookware is that many of the saucepans, saute pans and skillets have hammered bases, even when the sidewalls have a smooth finish. It’s a beautiful effect.

I’m continuing to learn about Havard’s history and the characteristics of its production over time, but a central question is who actually made the copper. My field guides hang on the premise that stamps are a reliable way to identify vintage copper, but I am coming to suspect that the different workshops supplied the different retail fronts over time. (This is why I also look at handles and hammering styles — stamps can come and go, but the hardware and craftsmanship of a piece of copper is immutable.)

I’ve reached out to Cornille-Havard with a series of questions about their history and production, particularly on the era of stamps and the workshops who supplied them. I will update this guide as I learn more.