A La Ménagère, Allez Frères, and Grands Magasins du Louvre were three large department stores that flourished in 19th century Paris that commissioned and sold custom copper cookware. Each store’s pots and pans are instantly recognizable by the distinctive shape of the handle baseplate. I thought I’d bring examples of all three together so you can compare them side by side.

This department store on the ground floor of the magnificent building at 20 Boulevard Bonne-Nouvelle was one of the grandest retail emporia in Paris from its inception in 1863 until it closed in 1930. It was not the first large retail store at that location but it was certainly the most successful.

Les Galeries du Commerce et de l’Industrie at 20 Boulevard Bonne-Nouvelle was an ambitious public-private development project opened in 1838. The developer, André-Martin Labbé, hired two prominent French architects to build a five-story edifice to combine retail, dining, and entertainment under one roof. The ground floor was Le Bazar Bonne-Nouvelle — as its name implies, a bustling retail space modeled on an open-air bazaar with 300 stalls rented to individual sellers. The basement was a large food market, and the floors above featured a cafe-restaurant, a theater, and a gallery and exhibition space on the top floor.

In 1849, financial difficulties forced Labbé to sell the property to Eugène Sala who operated it until 1851 when the business was sold yet again to the wealthy Italian nobleman and banker Alessandro Torlonia. He relaunched the property in 1863 as A La Ménagère (“for the household”). He discarded the Bazar Bonne-Nouvelle model of independent shopkeepers in favor of a single large store with multiple departments that could exert greater control over quality, competition, and customer experience. This formula was successful and A La Ménagère thrived as a “department store.”

In 1899 a fire completely destroyed the building. Torlonia was able to rebuild and relaunch the business in 1900 as Les Galeries de la Ménagère, a member of the Nouvelles Galeries retail chain. (That chain continues to this day as Groupe Galeries Lafayette.) The building at 20 Boulevard Bonne-Nouvelle was demolished in 1930, and the address is now a large postal office built in 1953.

A La Ménagère copper doesn’t have a store stamp in the conventional sense — that is, there is nothing stamped into the body of the copper. Instead, the store name is stamped onto the upper surface of the iron handle. But my experience is that this stamp can sometimes be hard to read, so it’s worth becoming familiar with the distinctive handle baseplate and hanging loop shape.

There are two handle designs that I have observed, both shaped like an inverted triangle. One design is a straight-sided arrow while the other has subtle lobes that give it a clover-leaf shape. Here are the two baseplate styles side-by-side.

Handles with the clover-shaped baseplate have a two-line text stamp reading “A La Ménagère Paris.” This handle can have either the same notched-corner hanging loop as the arrow style or a simple lozenge shape.

The store existed as “A La Ménagère” from 1863 to 1899 after which it was known as “Galeries de la Ménagère.” Both the arrow and clover handle designs are stamped “A La Ménagère”, which suggests to me that they both represent production before 1899; after that point, the stamp should have been changed to “De La Ménagère” to match the store’s renaming. Based on this, I propose that a piece of copper carrying the A La Ménagère handle design was produced between 1863 and 1899.

Reader Greg M., who contributed some example photos for this post, believes that the arrow shape came first and was replaced with the clover shape.

The later version has a kind of clover leaf look while the earlier type is more like a simple triangle, rounded at the top corners. This version did not cover much area and the rivets were fairly small. I imagine there were strength issues associated with this, hence the later design, which is more robust.

I think there’s a lot of merit to this idea, but at the moment I don’t know when the change occurred. If you know more about this changeover (and the overall time period), I’d be very grateful for your help.

Greg M. shared a photo of his collection of A La Ménagère pieces. Now that you know what to look for, can you spot the different handle styles?

Allez Frères was a large quincaillerie — hardware store — located at 1 Rue Saint-Martin from 1856 into the 1930s. They sold a wide range of hard goods: garden furniture, kitchen appliances for hotels and restaurants, furnaces and boilers, electric and gas lighting, cleaning equipment, household items, silverware and china, bathroom fixtures, and wine-making equipment… and that’s just from the 1878 catalog!

Of note, the store did not sell clothing (aside from uniforms or protective gear). Their emphasis was not so much on luxury or style but rather on an extensive range of useful products in varying tiers of quality and price — that is, providing the most choice to the buyer. Their catalogs are delights, but over them all, the 1888 edition reigns supreme. Within its pages can be found my favorite piece of Allez Frères merchandise: the portique avec gymnase complet, a braced wooden structure equipped with an assortment of hanging apparatus and terrestrial accessories with which a gentlemen could achieve a truly superior level of physical fitness. 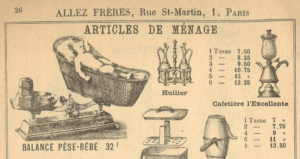 My second favorite item, also from the 1888 catalog, is the balance pèse-bébé, a set of scales dedicated to the singular purpose of weighing babies. Of interest here is that the balance pèse-bébé is listed on the Housewares page of the catalog, cheek by jowl with a set of oil cruets and perilously close to the exploded view of an asparagus steamer. The serious expression on the face of the baby currently being weighed leads me to suspect that he is already plotting how to extract himself from the contraption so he can get his hands on those cruets or, better yet, the even more dangerous-looking coffee maker hovering just beyond.

The store survived into the 1930s when it finally closed. (For a more extensive history, please see my writeup on my 34cm Allez Freres cocotte.)

At the moment I believe Allez Frères commissioned their copper cookware from Villedieu-les-Poêles. These pots have a store stamp on the copper as shown at right reading “Établissements Allez Frères Paris.”

The handles came in iron or brass with a “trefoil” shaped baseplate. It’s similar to the A La Ménagère clover baseplate above, with the same triangular arrangement of rivets, but the shape is more clearly defined. In particular, look at the top edge near where the handle projects — there is a sharper edge there, quickly recognizable if you know to look for it.

The hanging loops are a keyhole shape with a flat base and rounded top. (My iron example looks a little wonky but the overall shape is the same as the loop on the brass handle.) This is very similar to the English style and once again I suggest you look at the baseplate to be sure of the identification.

Les Galeries du Louvre opened in 1855 on the ground floor of the Grand Hôtel du Louvre on the Palais Royale in Paris. The store was so successful that in 1875 the owners purchased the entire building, moved the hotel across the Place du Palais-Royale (where it resides to this day), and after two years of refurbishment re-opened Les Grands Magasins du Louvre in 1877. The drawings below are from the 1880 Paris Almanach and they show the site in 1580, and then in 1880 with the full building in situ.

The store had 52 departments and counters for everything from clothing and jewelry to housewares, toys, and art.

The store survived both wars, though it was struck by a British fighter plane in 1943 and required extensive reconstruction. The business finally closed in 1974 and the building was converted to Les Louvres des Antiquaires, an antiques market. That business was closed in 2015 and is scheduled to be relaunched in 2020 as a luxury department store.

There are two versions of the GML stamp. They are very similar at first glance, with the store’s name and city in the same arrangement within an oval. But the version on the right below has the addition of two small circles on either side of the word PARIS, and the position of the words and the spacing between them is slightly different. I do not know what the two stamps represent — was one earlier than the other? If so, which one? (Thanks to reader Stacer M. for the example on the right below.)

The handles came in iron or brass, and once again, the baseplates are triangular in shape. But the geometry of the triangle is much wider than that of the A La Ménagère or Allez Frères baseplates, with the two top rivets positioned farther apart. The shape of the baseplate is also much softer with no hard edges.

The hanging loop on both handles is an asymmetrical ellipse, slightly broader towards the outer end.

Based on research by Thomas Larham and my own work, I believe that Grands Magasins du Louvre copper was produced between 1887 (when the store was opened under that name) and the 1920s.

These are all desirable pieces of copper in my book — all produced during the golden age of French copper from the 1880s (plus or minus) into the 1920s. But one thing they do not seem to be is thick as I would define it, which is 2.5mm or more. Each of these pieces I have is 2mm thick at most. I can think of a couple good reasons for this: these pieces were marketed primarily to regular people and likely not intended (or priced) for heavy commercial use. (A thicker copper pot may not have appealed in any event: heavyweight copper was just as heavy then as it is now, and I don’t believe that French citizens in the late 19th century had substantially more upper-body strength than we early 21st century folk.) Secondly, it’s possible that these are hand-raised pans and the time and effort to produce them in volume from thick copper may have proven prohibitively expensive. I’d welcome your thoughts on this, too.

Still, they are lovely. The level of finish on these pieces is divine: the handles are beautifully shaped, the rivets are smoothly finished, the returns are beveled. They represent a moment in time when going to the department store was an all-day event to bask in the material bounty of the Belle Epoque manifest in glittering aisles of merchandise.