Home > Identification > Construction > All about rivets

The way a rivet looks indicates how it was formed and fitted to the pot. I’m coming to suspect that rivets could indicate the era in which a French copper pot was made. 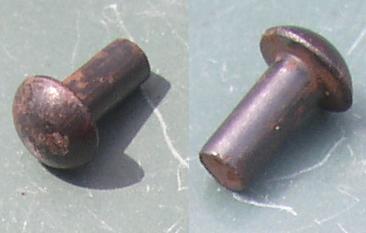 When a rivet is made, it’s given a “factory head” (in French, la première tête), the mushroom or button shape on one end. Once the rivet is inserted through the pot wall and handle, the smith pounds or “upsets” the other end into a rounded or flattened shape to form the second head — the “shop head” (la rivure) — that spreads and locks the handle to the pot.

I think the appearance of the factory head and the shop head are clues to the technology used to assemble the pot and handle, and which in turn can indicate the general era of the pot.

Up to the mid-19th century, rivets were forged by hand: the smith heated up a metal bar and used a special anvil called a bombarde to cut the bar to the proper length and hold it in place while he or she shaped the factory head. A skilled smith could make about 100 kilos (220 lbs) of rivets a day. (For this history, I am indebted to the Bulletin de la Société d’encouragement pour l’industrie nationale, which, in 1906, saw fit to publish Étude expérimental du rivetage [Experimental study of riveting]. I found it to be, well, riveting.)

This began to change in 1836, when a French coppersmith named Antoine Durenne patented a machine that could manufacture rivets using mechanical pressure to shape the factory head. What had been a task that consumed hours of a smith’s time could now be handled mechanically. More innovations followed: by 1855, an English coppersmith invented a machine that could produce 1,000 kilos (2,200 lbs) of rivets a day, and by 1862, a French machine could crank out 2,000 kilos (4,400 lbs!) of rivets per hour.

At the same time that Durenne figured out how to use mechanical force to manufacture a rivet, other engineers began to work out how to apply the same principle to the riveting process itself. In 1838, just two years after Durenne, Sir William Fairbairn in Manchester produced a machine that could insert a rivet, hold it in place, and press a forming tool against the protruding shaft to form the shop head and finish the rivet in just eight seconds.

As with the rivet-making machines, improvements came quickly. The machines evolved to use steam pressure, pneumatic pressure, and finally in 1872, hydraulic pressure. Pneumatic and hydraulic hand-held and bench-mount riveting machines are used today, along with electromagnetic systems and other 20th century improvements.

I’m having a hard time finding authoritative sources on who did what when, but I think I can make some common-sense guesses.

Assumption #1: I think machined rivets began to appear in French pots around 1840, a few years after the first mechanized rivet machines were produced. Coppersmiths would have welcomed the capability to produce machined rivets, sparing manpower to focus on shaping and assembling pots. I think it would be worthwhile for a manufacturer to buy a machine for its own use or to buy finished rivets rather than pay people to continue making them by hand.

Assumption #3: I think riveting machines did not come into use in French pot-making until 1880 or later. The first crank-driven riveting machine in 1838 was heavy and dangerous; its continuous eight-second cycle gave the operator four seconds to move everything in and out, and if anything was out of alignment, the rivet would be spoiled. The steam-powered systems that followed gave more control over the timing but were still huge and ponderous and required a steam boiler and plumbing. These systems were conceived for riveting long sections of metal for bridges, ships, and buildings and would not have been ideal for the more delicate work of pot-making. It was not until the hydraulic process emerged in 1872 that smiths could rivet with safety, control, and precision, but the first applications for these systems were immediately put to work making bridges and ships. I have no hard data to back this up, but I am guessing that it took several more years (and patents) for riveting machines that were sized and priced appropriately for a coppersmith.

Assumption #4: I think a machine-riveted pot will have uniform exterior shop heads. Just as the factory head of a machined rivet has a smooth finish, so should the shop head formed by the same process. The shop head could have a smooth dome, a bullet shape, or a partially flattened surface depending on the tooling used to form it.

I’m going to take a look at the rivets in the pots to which I have access and see if I can make an educated guess about the period and method by which it was made.

These pots have hand-made rivets that were inserted and finished by hammering. Here are the distinctive characteristics I see:

The factory heads on the inside of the pots also show some hammering. This could be from rivet tightening during a retinning; a good tinner will check for any wiggle in the handle and if needed will give a few measured blows to the rivets to compress them and tighten things up. Another possibility is from the assembly. The smith will have needed some kind of clamp to hold the factory head tight against the pan while he or she pounded against the other end, and this process may have left some physical marks. (I’m trying to learn more about this craft.)

The first rivet-making machine was patented in 1836, and I’ve made the assumption that smiths would have switched to pre-made rivets for the obvious time-savings. It would follow that there would be a transition period when coppersmiths used machine rivets but still hammered them into place by hand.

In support of this idea, here is what I see:

While a loose rivet can be whacked a few times to help secure a wobbly handle, sometimes a smith opts to drill out an old rivet and replace it completely. I have two examples of this that appear to have rivet replacements that look different from the originals.

It’s easy to spot the replaced rivet in the sauté pan below — the factory head protrudes relative to the other two flattened heads. On the exterior, the shop head (on the left in the photo) still looks hand-hammered. I would estimate this repair was done in the late 19th century.

The handle below belongs to a pot that I suspect is early to mid-19th century, and I suspect that the rivet on the right was repaired much later with a riveting machine of some sort. The brass around the rivet has been marred, but I don’t think this was from hammer strikes. If it were, the rivet would also be flattened. Instead, the rivet head protrudes as it would if it were being shaped with a forming tool that socketed around it, and that came up against the brass handle.

This is the beginning of the modern industrial era: smiths used machines to make the rivets and to fasten handles to pots. The key element of this era is the uniformity of the shop heads on the handles.

That said, the shop heads do not all have the same appearance. I suspect that different manufacturers used slightly different tools and methods for the riveting, which produced different shapes: a smooth dome, a flattened dome, a pancake, et cetera.

This shop head style is a smooth hemispherical dome. It is of course possible that a skilled smith could shape a smooth round head like this with a hammer, but I also see known pots from the 1970s onward with this style of rivet, and it’s produced by a rivet press with a rotating head that compresses and smooths the rivet into a dome.

As my name for it implies, this is a rivet with a dome shape that has a flat top. It could be that the forming tool created that shape, or that a two-step process created a dome and then a second tool flattened it to compress it further.

These rivets have been flattened into a distinct pancake shape.

I have a few pans that have unusual characteristics.

The rivets in the pot below have factory heads and shop heads with a concentric circle mark. I suspect this is a 20th century pot with machine-made rivets and a riveting machine, and it’s possible the forming heads left the same distinctive stamp on the rivet heads.

The twin handles on this daubière look to have been riveted with different techniques. The upper handle (for the shallow rectangular lid) has uniform bullet-shape shop heads that appear to have been machined, while the lower handle (for the deep rectangular body of the daubière). has flattened, irregular, hand-hammered rivets. My theory is that the smith had some kind of riveting machine but only used it for the lid handles because the deep shape of the daubière body was difficult to maneuver into position for riveting. 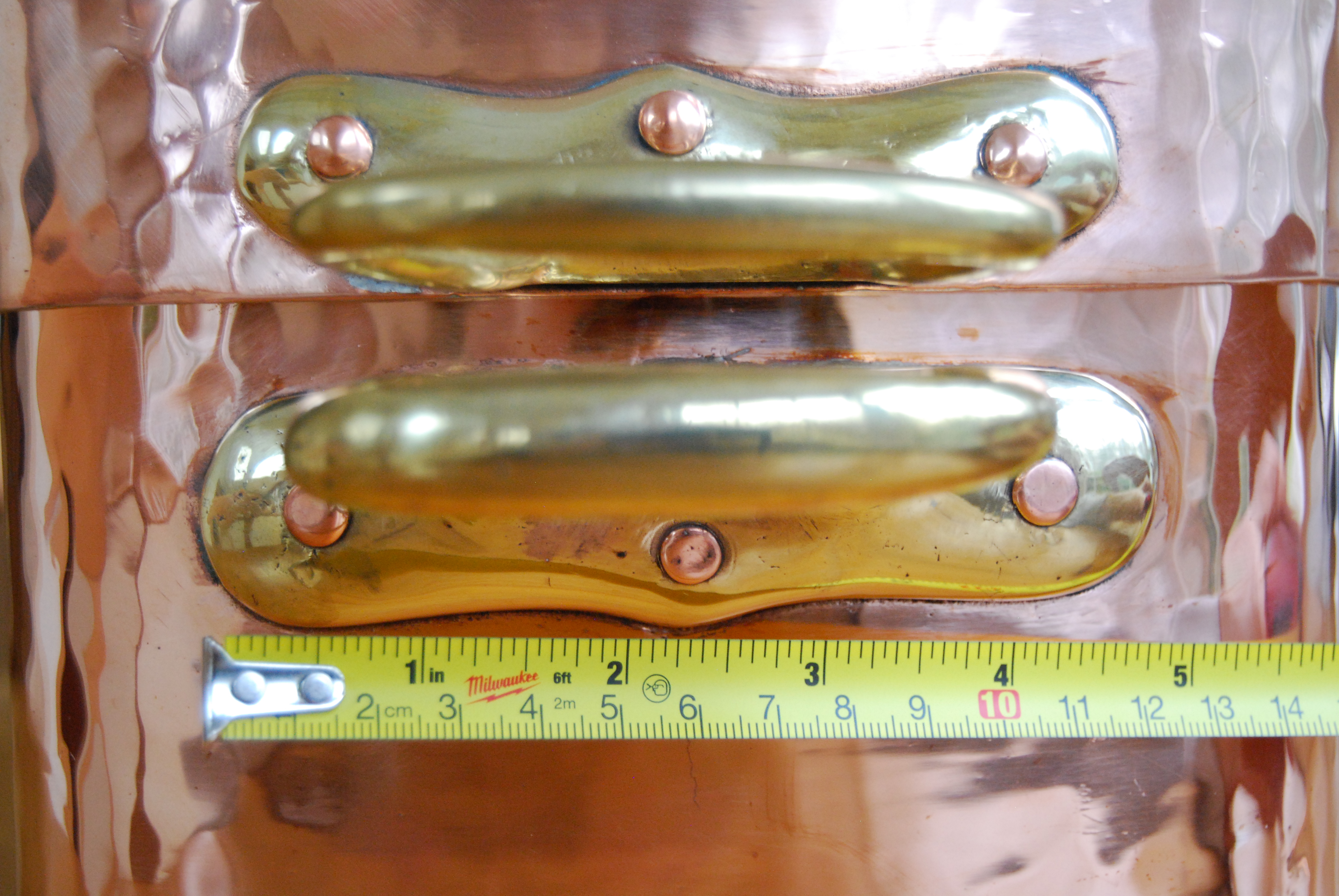 Sara Dehman of House Copper tells me that riveting techniques are closely guarded secrets, but there are nonetheless a few videos that show how this is done.

In 2016, Falk was featured on the Discovery Channel show “How Do They Do It” (Season 12, Episode 14). In May 2019 Falk posted a video of the segment and it’s very informative — there’s narration and subtitles in English. The video is 5:30 long, and the riveting process begins at the 4:05 mark.

This video is from an assembly line. The rivet is probably aluminum, as it compresses easily into place.

I hope this post has been helpful to you. I would really welcome your comments and information if you can contribute.

I added the May 2019 Falk video, replacing two others, because the new video explains things much better.