Home > Identification > Stamps > “Made in France”

There’s more to this stamp than meets the eye.

Starting around 1960, French copper cookware began carrying “Made in France” stamped into the copper. From what I can gather, this was due to country-of-origin labeling requirements for the European Economic Community (the precursor to the EU) formed in 1957. (Though this is hotly disputed!)

Some makers and stores had the word “France” already in their name or logo but others had to redesign their stamp or add a separate stamp to meet the labeling requirement. Sur La Table, for example, does not have the word France in its logo and so needed the additional origin marking on its imported copper. Mauviel, ramping up to mass production during this time, seems to have decided to stamp “Made in France” on everything, which may explain why pots stamped “Williams Sonoma France” sometimes have a separate, apparently superfluous, origin stamp.

Can these “Made in France” stamps be used to identify copper that is not stamped by its maker?

Reader Bryan P. has shared with me two examples of pots stamped for two New York cookware stores that are most likely late 19th to early 20th century. The pots themselves are almost certainly truly French in origin; it seems possible that the stores added the stamps to make clear that the copper was imported from France and therefore especially valuable.

The “Charles C. Ruegger” stamp dates the pot to sometime between 1874 and 1929 (after which he opened Bazar Français). The housewares store Lewis & Conger was founded in 1891 and seems to have operated into the 1950s (though I haven’t yet discovered its end date). Both of these date ranges suggest that the pots were stamped well before 1957.

I have two examples. The store stamps are different but the “Made in France” portion seems strikingly (no pun intended) similar. Note the curiously curled letter r in France — it is identical on each pot. My guess is the two stores were buying from the same importer. 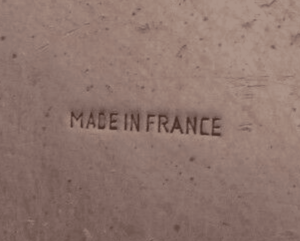 There is also a one-line stamp that appears on pieces that are most likely produced after 1957.

Typographically, it’s most similar to the two-line “short M” version you will see below — the point of the M goes only halfway to the baseline. However, the letter C in this stamp is boxy-looking, while the “short M” version below has a rounded C.

Update: There may be a second one-line stamp without the boxy C — see below. So far I’ve seen it on a Havard-made piece.

Update: I think this stamp is Mauviel or another Villedieu maker. The “Gaillard Paris” and “E. DEHILLERIN PARIS” stamps of this era are store stamps, not maker’s marks; after WWII, these companies (along with Jacquotot) stopped making consumer-grade pots and pans to focus on the high-end restaurant market, and supplied Mauviel-made copper (or possibly other Villedieu makers) under their own name.

These are all definitely the same stamp — note the same boxy C.

Update: I think there’s a second one-line stamp out there without the boxy C. I’ve seen it on the lid of a suspected Havard piece. I don’t have a the best quality photo of it, but here it is.

I’m going to keep an eye out for more examples.

There are two distinctive characteristics of this stamp:

The key thing about this stamp is that it looks as though it has been squeezed into an oval shape. Once you know to look for this effect, this stamp becomes easy to spot. Note, however, that copper stamps are sometimes applied with uneven force that can make some letters look thinned out, so try not to mistake a careless lopsided stamp for the true Mauviel rounded stamp. When in doubt, look for the point of the M: on this stamp, it does not quite touch the baseline.

I have only seen this stamp style accompanied by a Mauviel stamp. My hypothesis is that these Mauviel stamps were put on items for sale at the Mauviel factory store in Villedieu-les-Poêles. Note that there are two Mauviel stamp styles in this series — one with an oval cartouche, and one without.

This group of store stamps tells me a few things. First, the oval Crate and Barrel, Dehillerin, and Verbeelen store stamps look very similar to the oval Mauviel Villedieu stamp above; this leads me to wonder if the Mauviel factory had the store stamps made up in the same style as its own maker stamp at the time.

Second, the Sur La Table store stamp is the current Sur La Table logo, not the “SLT” monogram version that I suspect is older. This would date use of this stamp to later than the two-line short-M version you will see below.

Finally, I’ve noticed that the brass handles in use in this series all have rounded baseplates. Compare them to the spade-shaped baseplates in the rectangular version below. (Absence of evidence is not evidence of absence, of course, as I will keep an eye out for other examples to disprove this.)

This stamp is easy to confuse with the oval shape version, so here are the key things to look for.

The challenge is that these stamps are often applied with unequal force, so one side of the stamp can be deeper than the other, or the outer edges can appear faint. A mis-applied stamp can make the vertical strokes of the M, N, and F fade away, which might make you think it’s the oval version above. When in doubt, look at the M: in this stamp, the center point of the M touches the baseline (“long M”), which is a key difference from the oval version.

Update: I believe this stamp identifies Mauviel-made pieces.  Even though it can appear alongside marks for Dehillerin, Jacquotot, or Gaillard, these companies had stopped making consumer-grade copper after WWII to focus on the restaurant and catering market. If a customer wanted smaller pots and pans, these companies turned to Mauviel (or perhaps another Villedieu maker) and stamped their name on it — just as if they were a store.

All five of my daily-use 1980s-era Gaillard saucepans carry this stamp. I’m including all five of them to give you a good overview of variations in the appearance of the same stamp across multiple pans. Reader Stephen Whalen has also contributed a photo of this stamp on a Jacquotot pan with the 77 Rue Damesme address (its location after WWII).

I see some patterns in the manufacture of these pieces. Some of the brass-handled saucepans have a distinctive spade-shaped baseplate, while the shallow skillets use a rounded version. I don’t know yet whether these differences signify different sources in Villedieu — Mauviel versus Havard versus Atelier du Cuivre versus Lecellier and so forth.

As above, I see more spade-shaped brass baseplates on the saucepans in this set, while the skillets have rounded baseplates.

It can be tough to tell this one from the other two-line rectangular versions, so look closely for its distinctive characteristics:

This stamp can appear quite different on different pans: on some the stamp is deep and the letters are substantial, while on others the stamp was applied with less force and the letters look thin, almost engraved rather than impressed. This puzzled me for quite some time until I realized something that should be obvious: I see the thin style on stainless-steel lined pans, and the thicker style on tinned pans. I think these are identical sister stamps but applied with different force according to the material of the pan wall.

I see this stamp on tin-lined and steel-lined pieces stamped for Mauviel and Atelier du Cuivre. My theory is that Atelier du Cuivre was buying unfinished pot bodies from Mauviel and finishing them with their own handles and stamp. Take a look and let me know what you think in the comments.

Steel-lined pans with no maker or store stamp

If my theory is correct, these are steel-lined pans that were finished by Mauviel or Atelier du Cuivre but not given maker’s marks.

These examples are stamped for Mauviel or Atelier du Cuivre.

Tin-lined pans with no maker or store stamp

This is a fairly rare stamp. It’s easy to distinguish from the others, of course, given its typographical layout.

As is usually the case when I dig into an issue like this, I answer some questions while coming away with new ones. You can of course draw your own conclusions from what I present above as well as from your own experience, but I offer these ideas.

I welcome any information you can contribute — let me know in the comments or by email.