Peter was a coppersmith and kitchenware manufacturer based in Brussels, Belgium — the “Brux” in the stamp — from 1933 to 2006. They made copper pots and pans for a period of time but eventually transitioned to reselling French-made copper, but any pieces carrying the Peter stamp will very likely be of high quality and well worth owning and using.

The first business listing I can find for the firm is in 1933 for J. Peter, propriét. (proprietor) at 106 Rue de l’Intendant in Brussels. In 1935 the listing was expanded to read Maison J. Peter, constructeur machines et materiél de cuisine (maker of machines and kitchen items). The business moved in 1937 to 6 Rue de Barchon and again in 1939 to 23 Rue de la Querelle.

The Belgian business almanacs aren’t available from 1940 to 1945 — another casualty of World War II — and the next listing is in 1946 as Ateliers Peter, machines, materiel, batteries, douches, etc., pour cuisines (machines, kitchen items, cooking pans, sprayers, et cetera for kitchens) at 20 Rue de la Fontaine where it remained until the firm finally closed its doors in 2006.

According to TJFRANCE, Mr. Peter retired in the 1970s and his family continued to operate the firm until its closure. My own genealogical research has identified Juul Peter (1908-1981), industriel (manufacturer) as a possible candidate for the “J. Peter” in business listings. This Juul — short for Julius — would have been 25 years old in 1933 when the first listing for “J. Peter” appeared but I can’t yet confirm that they are one and the same.

These are stamps and example pots I have been able to compile, but I suspect there are more out there. 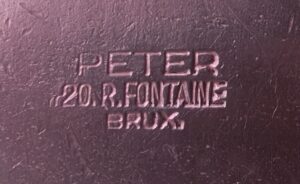 TJFRANCE says that Peter did not begin stamping its pans until it relocated to Rue Fontaine after World War II.  He says there are multiple variations but this example from TJFRANCE is the only one I’ve seen. I think it’s safe to assume that a Peter stamp with the word “Fontaine” represents work after 1945.

Reader Randy B. was fortunate to find a beautiful stewpot with this stamp and has provided these photos.

This stamp reads “Peter Brux.” and measures 19 millimeters across. I have only seen it oriented vertically.

I suspect that this stamp (and the similar ones below) was used after Peter switched to reselling French pans, making this a store stamp and not a maker stamp. I suggest this because I see the same change in Dehillerin — after they closed their chaudronnerie after World War II, Dehillerin also dropped the “18 Rue Coquillière” line from their stamp and became simply “E. Dehillerin Paris.” It makes me wonder if by convention the inclusion of a street address in a stamp meant that the pot was manufactured at that location, and that it would be inappropriate to put the retail store’s address on the pot. But there are exceptions: Mora stamped its address on copper and I don’t believe they ever made it themselves. This simplification could have been a post-war stylistic shift with no further implications — Gaillard and Pommier dropped their addresses as well.

Reader Matt M. provided some detail photos of his pan with this vertical stamp with a very distinctive feature: a concentric circle bulls-eye pattern on the internal rivets.

I found a few more examples online, unfortunately not with the same detail as Matt’s photos above. Note that the interior rivets (when visible) are flattened flush to the surface.

This stamp reads “Peter Brux.” and measures 13 millimeters across, smaller than the version above. It has a flaw next to the X of “Brux” that looks like the upper pip of a colon. The two photos below are from two different pots with this stamp — my 30cm Windsor and a saucepan belonging to reader Roger W. — and the same flaw appears on both.

Reader Roger W. provided detail photos of his saucepan with this stamp it has the same concentric circle pattern on the inside rivets as Matt M.’s pot above. (My Windsor does not have this pattern.)

I found one other example online. I am not 100% sure that this is the 13mm stamp and there’s not enough detail to see if the flaw it there, but I include it to show the eternal rivets.

This stamp is set horizontally. It’s stylistically similar to the small vertical stamp but it does not appear to have the flaw.

I think this is a late-era Peter stamp, or possibly used over the longest period of time, due to the wide variation in the characteristics of the example pots I found online. This variation would make sense if this was a store stamp used on copper sourced from multiple manufacturers. Take a look for yourself below.

Matt M. provided photos of a stewpot with this stamp. The internal rivets are rounded and do not have the concentric pattern. The external rivets are also smaller and rounded. This stewpot looks like French make to me.

Matt M. also provided a side-by-side comparison of two Peter Windsors. The one with the vertical stamp looks to me to be decades older than the one with the horizontal stamp.

What’s interesting about this next example pot is that the pot and lid have the same “Peter Brux.” stamp but are stylistically quite different. The lid handle is not the French queue de fer running along the radius of the lid, but instead has a small wide baseplate mounted at the edge. And compare the hanging loop on the handles: the pan has the classic French teardrop, but the lid handle has a simple round hole. The pot looks French to me and I think I have seen those conical external rivet heads before but I cannot recollect at this moment. The lid looks like a similar one I’ve seen stamped for Pommier.

Below is a sauté pan that looks classically French to me, but note the blob-like rivets. I have not seen French pans with rivets like that.

Finally, two skillets. The handle baseplates look quite small to me. These look like table service pieces from a small maker in Villedieu; I think Mauviel’s brass handles are a little larger and beefier than these.

This was a tough field guide to write as there aren’t many examples of Peter pots and stamps out there. If you have pieces with additional stamps or can contribute photos of construction details to go with the stamps I’ve found, I would be very grateful if you would reach out. And of course if you are familiar with Peter history or can point me to some online references I would love to improve this history! My email is vfc at vintagefrenchcopper dot com. Thank you!

I am indebted to TJFRANCE for some details. Thank you!