It took me a while to find this set and I am glad I waited.

When I’m having wine or beer it’s fun to try a taste test — for example, different brands of the same kind, or the same brand’s production over multiple years — so I can experience for myself their similarities and differences. I see this group of pans as a sort of flight of Gaillard copper: they were made by the same maker at the same time, but each is its own varietal according to its size. Like a sampling of wine from a vineyard, the pans as a set present an opportunity to observe expressions of Gaillard craftsmanship at a particular point in time. 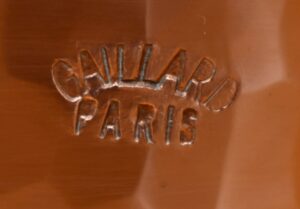 This set of Windsors carries this simple “Gaillard Paris” stamp that I believe represents post-war production, likely from the 1940s to 1950s. (There is no “Made in France” stamp as one would expect on a piece after 1957 or so.) By that point in time, neither Gaillard nor any of the other French poêliers were using the old methods of hand-hammering, cutting, dovetailing, et cetera; the differences between a Gaillard pan and one of equivalent thickness and construction from Mauviel would be vanishingly subtle. Older Gaillard with evidence of hand-work seems to command a higher price, which makes sense to me, but the Gaillard name on any piece commands a premium over other marques. Again, in terms of construction and performance, there is no real difference between equivalent pans from different makers. (I have a sneaking suspicion that this era of Gaillard is actually Mauviel, but don’t tell anyone I said that.)

All the pans have beautiful hammering. It’s more pronounced on the smaller pots, which also have hammered bases. The 22cm’s base is mirror-flat with no hammering.

I found that the 20cm and 22cm diameter pans had the same size handle with a base that is 11cm wide. The rivets themselves seem to be increasing diameter as the pot size increases — corresponding with their own diameter increments — but I didn’t measure them. The compression of the rivet distorts it and I didn’t think it would give me representative diameter values.

The largest of the pans has a slight distortion around the base. It’s hard to capture in a photo, but it looks like a slight bulge in the copper creating a slight ridge running around the base of the pan. My guess is that the hammering compressed the copper; another row of hammering might have evened it out but there does not look to be enough space. Another possibility is that th geometry of the Windsor shape makes for challenges when the pans are deep-drawn in a press (as these no doubt were); consider how a flat sheet of copper would have to distort to form a funnel shape. A paper cupcake cup, for example, has pleats in it to allow it to expand towards the top of the cupcake, but copper would need to stretch and compress. I wonder if this ridge is consequence of those forces.

You will have noticed that the tin looks dirty. It’s not — it’s unused tin with dark patches. These pans are what is termed new old stock, or NOS, which means they’ve been sitting in storage somewhere but have not yet been used for cooking. These pans are about forty years old, which leaves a lot of time for undisturbed chemical reactions; the dark patches are areas of oxidation or possibly something else (alpha tin, which I’m looking into for another post). In my opinion, all these pans need is a good wash with soap and water and they’re ready to use (and in fact the tin has likely crystallized a bit into an optimal condition of hardness). My daily use Gaillard saucepans (cousins to this set!) came to me in the same condition and they have performed fabulously well.

As I mentioned at the top of this post, I waited a while for this set of Windsors. I love my Gaillard saucepans of the same era and I held out hope for some time that a similar set was out there in the Windsor shape. I am so grateful for FrenchAntiquity’s indefatigable nature — he is always bringing wonderful pieces and sets of copper to his store, and when I saw these I knew I had to have them.