The stamps tell the story of this lovely railway pan. 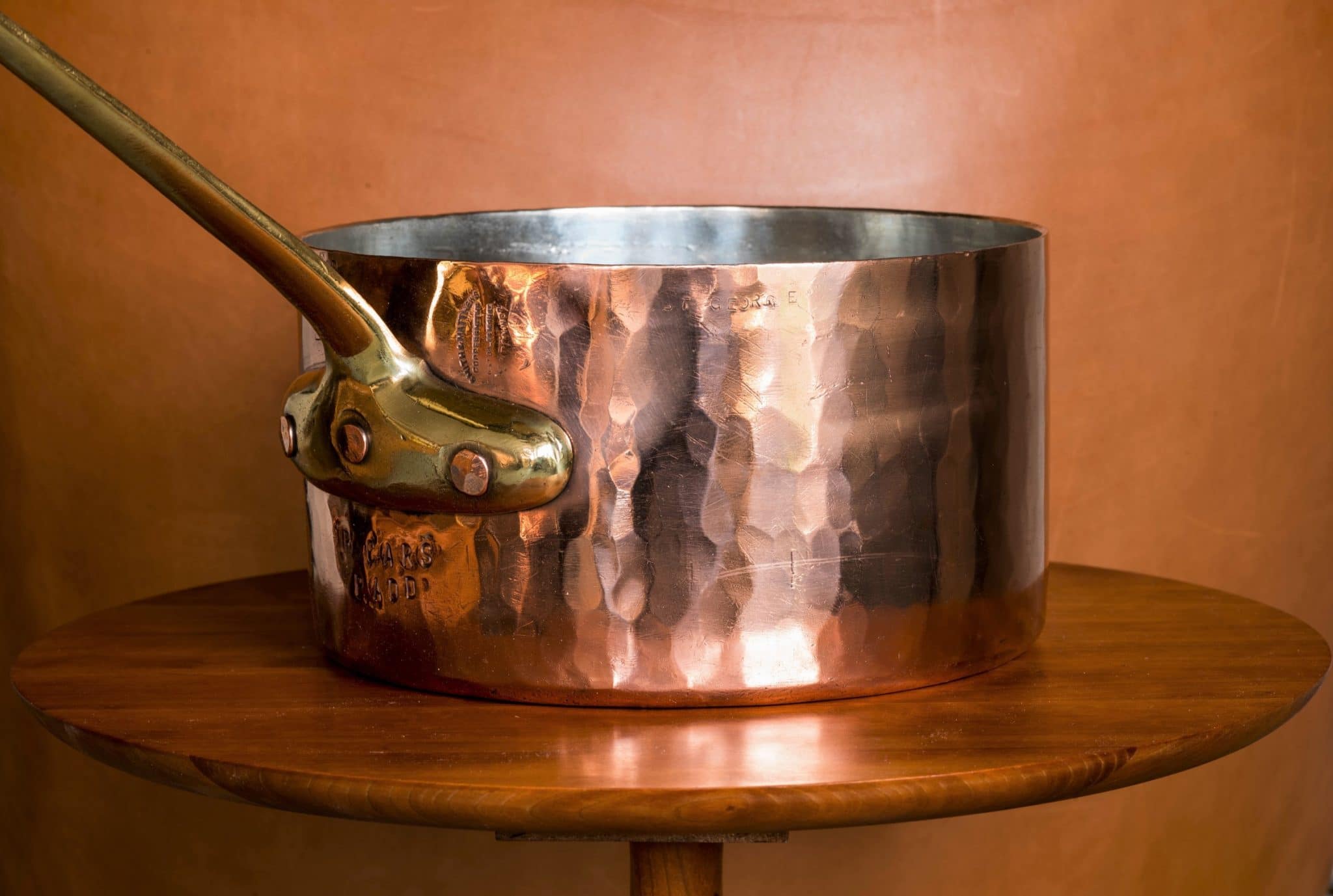 When Martin sent this pan to Stephen Pearse at Newlyn Tinning for refurbishment, Stephen’s immediate reaction was, “Ah — a railway pan!” I am glad I am not the only one with goofy enthusiasm for these pieces. The golden age of European copper cookware coincided with the peak era of luxury train travel and it is fun to imagine a cramped and bustling railway kitchen slinging copper pots about as the chefs prepared haute cuisine for glamorous first-class passengers. These pans made for service on European railways worked harder than most — with no room to spare in the kitchen, every pot had to pull its weight. The ones we find today are often battle-scarred with decades of dings and scratches, but they are also heavy-duty, high-quality survivors.

This one is a beautiful example — it’s an English Smith & Matthews saucepan belonging to copper aficionado and talented photographer Martin. 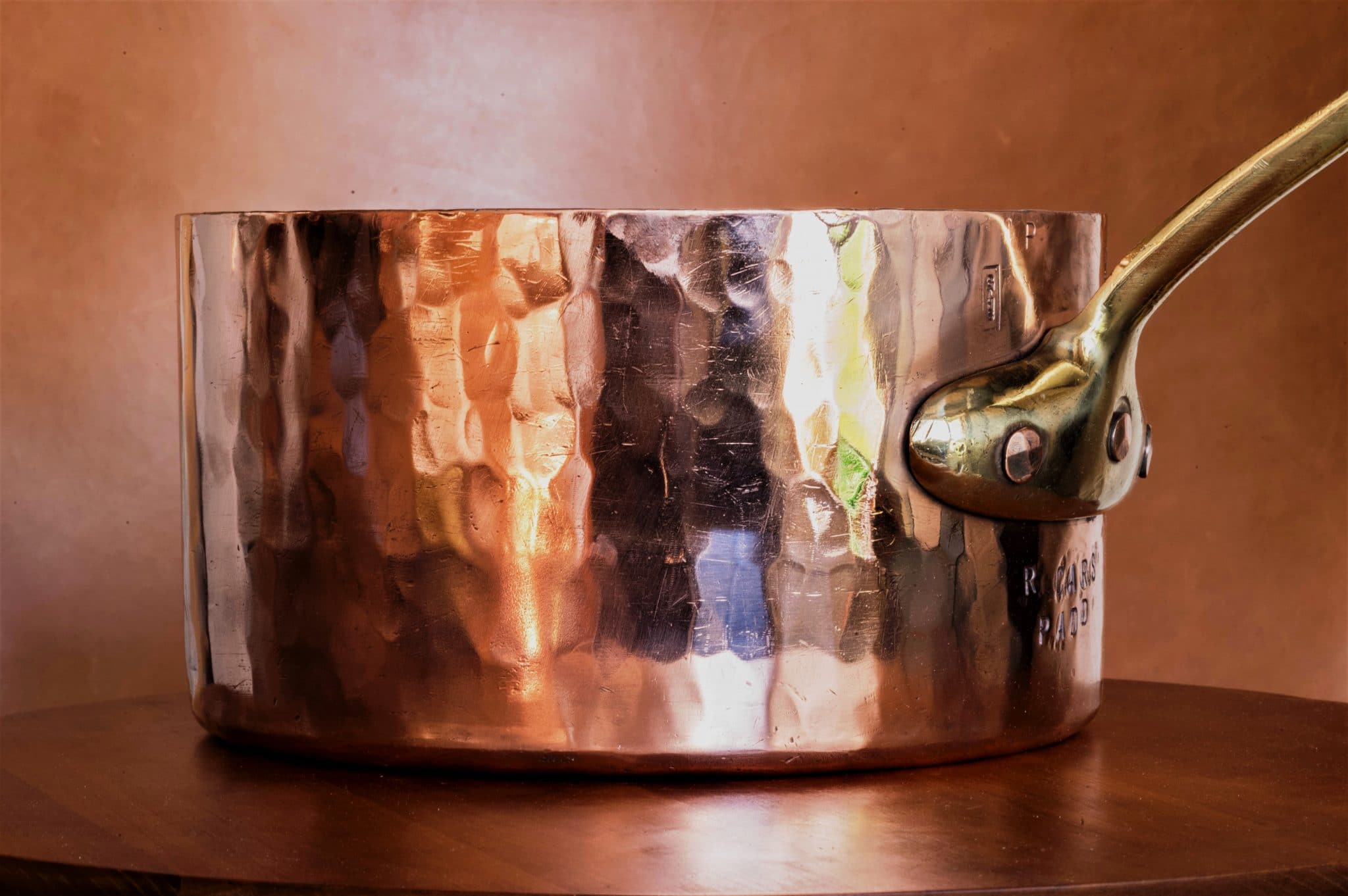 It’s a gorgeous piece, isn’t it. Stephen Pearse at Newlyn Tinning did a great job with the restoration but this pot had a lot going for it already. Take a look at the hammering — there is a distinct aesthetic here. Compare this irregular pattern to this brass-handled saucepan, this stewpot, and two smaller pieces, all early to mid-20th-century French make. The French style is a more regular pattern of small hammer-strikes like the scales on a fish, while this pan is in a more chaotic and naturalistic style. I’m sure the craftsman who laid down these strikes harbored no lofty artistic pretensions, but looking at it now, it seems to me to have a beautifully organic disorganization, like weathered tree bark.

The brass handle looks French at first glance. The archetypal English iron handle baseplate shape is the inverted arrowhead as on this Jones Bros. saucepan, but this handle’s baseplate is an elongated oval in the French lozenge style. That said, this brass-handled English Leon Jaeggi bain marie (also from Martin’s collection) has the same baseplate shape. Could it be that on English copper, only iron handles had the arrowhead baseplate while brass handles had the broad lozenge? 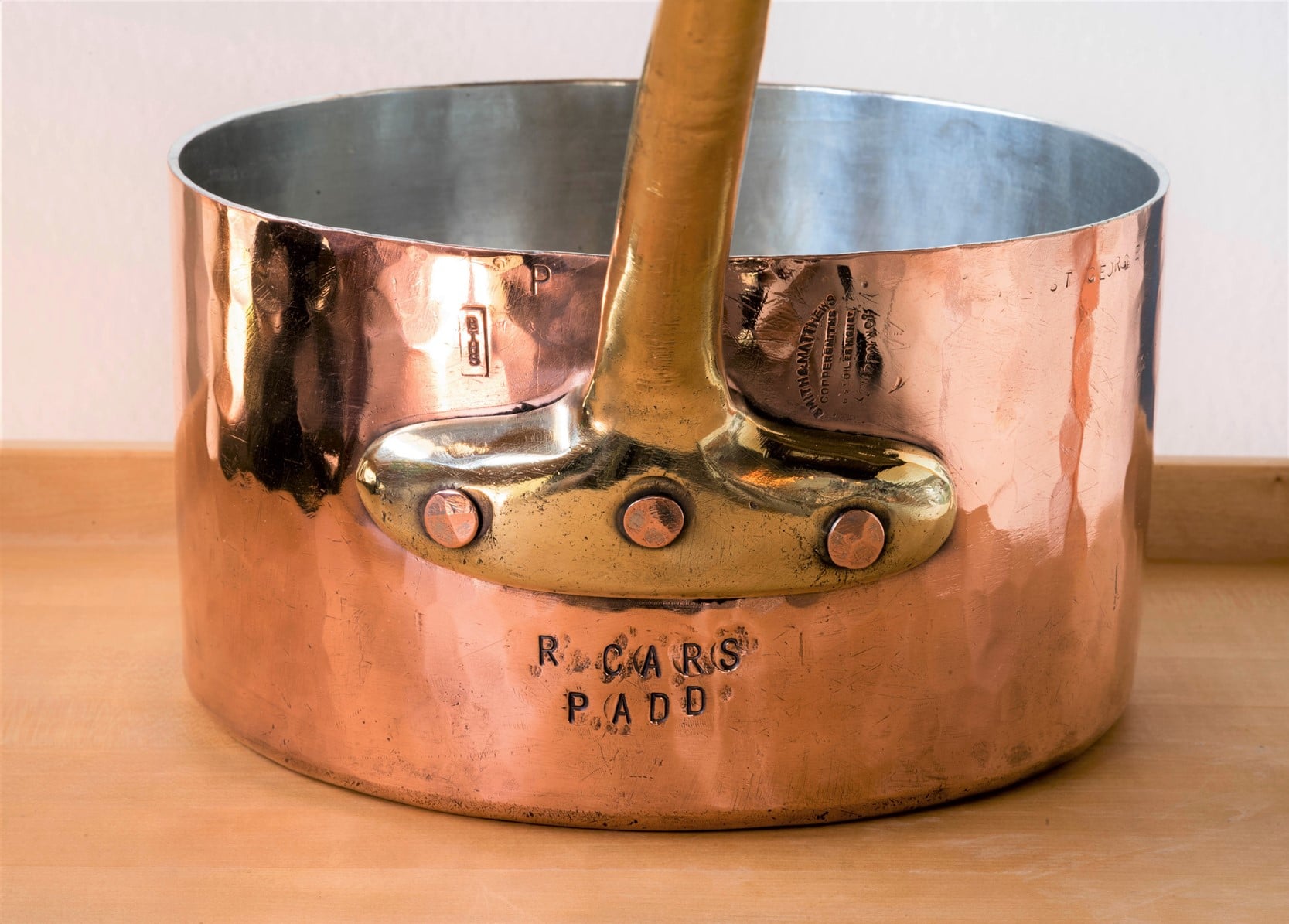 Baseplate aside, the rest of the handle does not look French to me. The handle shaft takes a slight bend coming off the baseplate but then extends in a straight line with no curvature. My two iron-handled English pieces — the aforementioned Jones Bros saucepan as well as this Lee & Wilkes Windsor — also have dead-straight handles and I wonder if this is another element of the English aesthetic.

The hanging loop is a simple circle, not the French teardrop (nor the keyhole shape of English iron handles, either). This may be unique to Smith & Matthews but I can’t find another brass-handled pan to which to compare it, and so I do not know for sure. 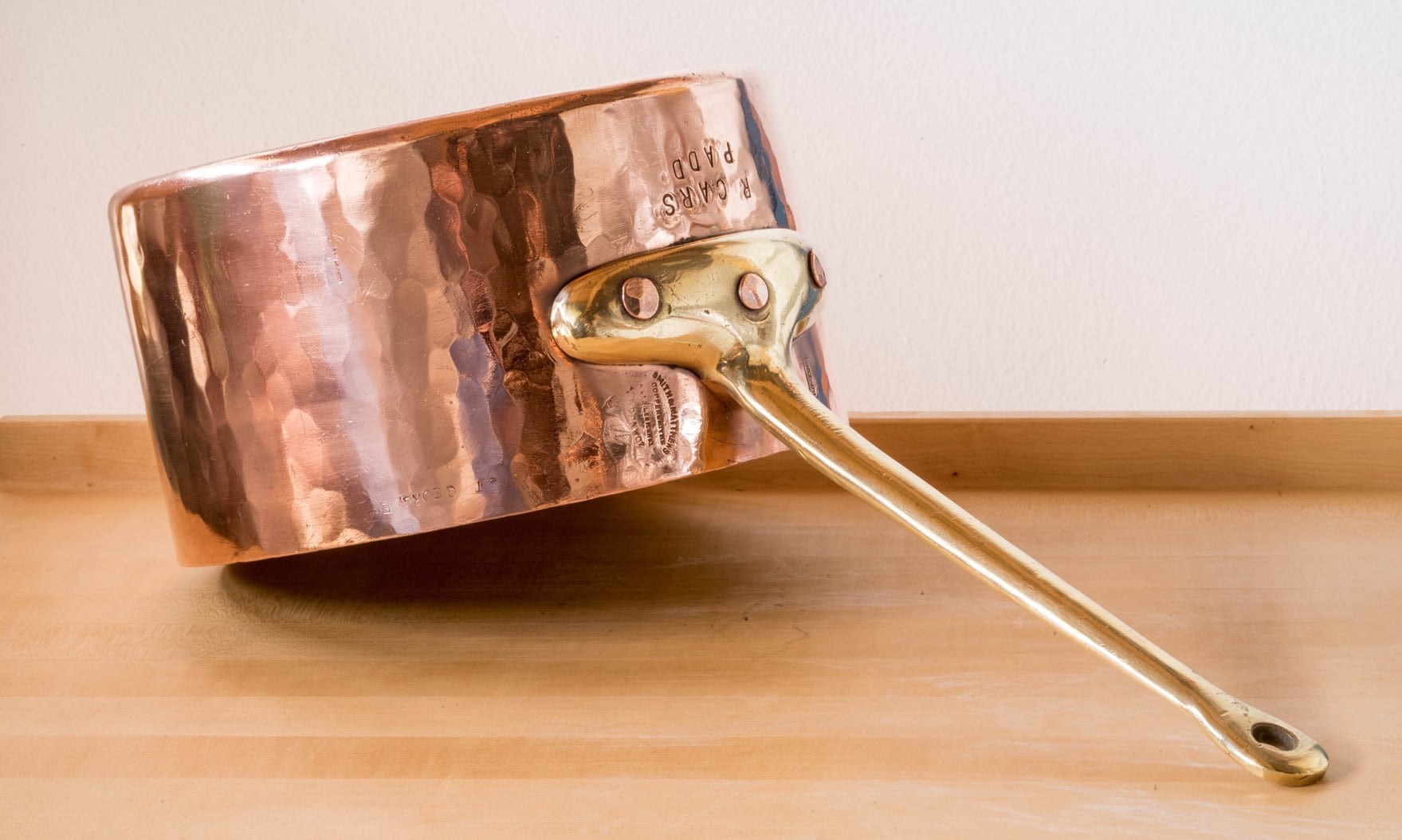 The base of the pan has been given some hammer-strikes to help toughen the copper. The outside edge between base and sidewall is a smooth curve — the sign of a machine-pressed pan. (Copper this thick would be very difficult to bend by hand.) 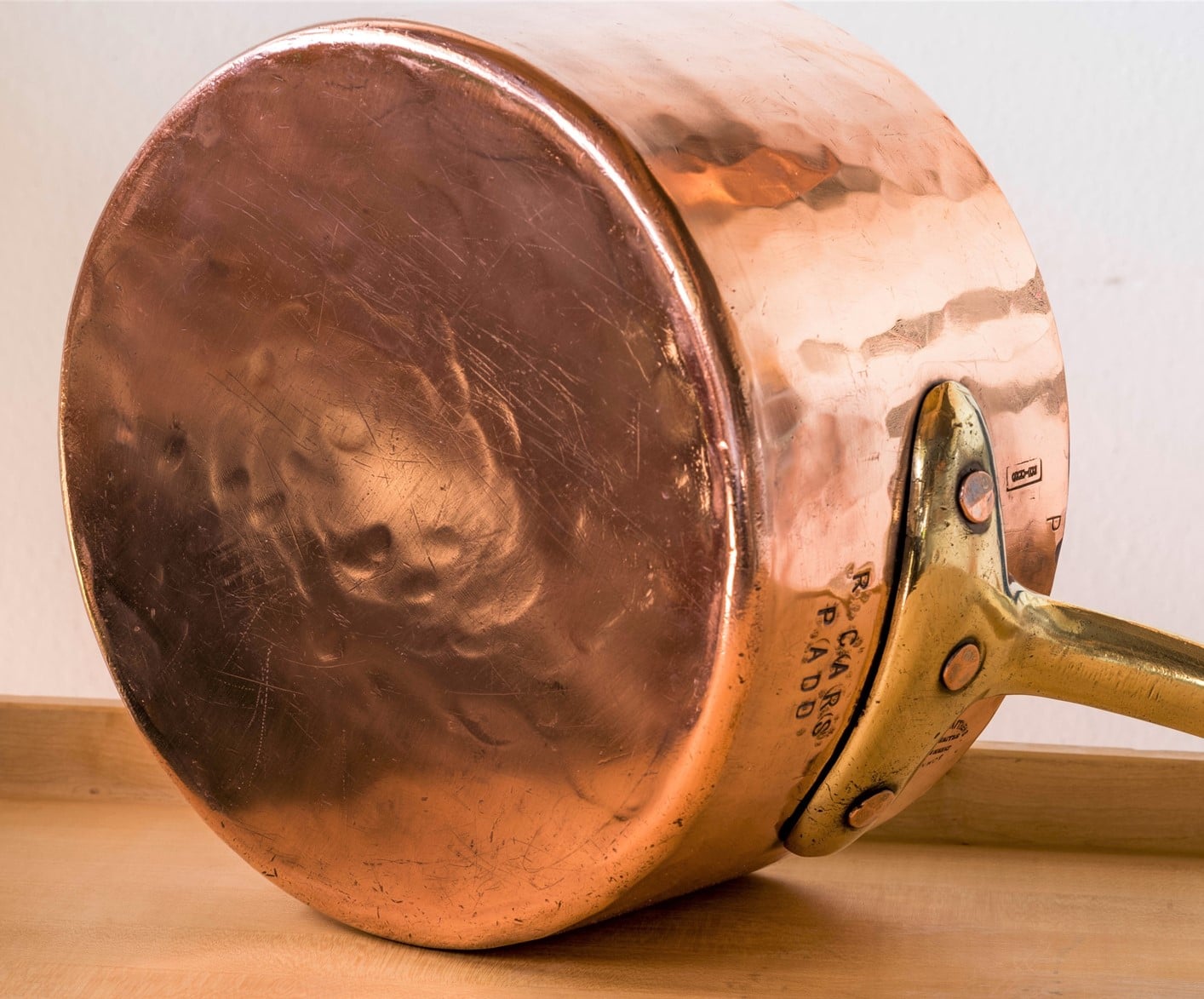 The interior rivets are flat and flush-set. I have previously associated this flat-head style with 19th century handmade rivets but I am coming to question that assumption as I learn more about craftsmanship during this time. The outside rivet heads have been given a multi-faceted finish with hand-hammering.

I’d like to take a moment to appreciate the work that Stephen Pearse at Newlyn Tinning did for this restoration — the tin is quite smooth and catches the light beautifully. (And of course Martin’s skill with his camera captures it perfectly!)

Martin measured the rim of this pan at 3mm but at 4600g (10.1 lbs) it is quite heavy for its diameter. To put that in perspective, here is Martin’s pan alongside a few others I have measured:

There is more copper in this pan than its rim measurement would suggest, and it must be in the lower sidewalls and base. This is exactly where you want thick copper — the base is where the pan receives heat from the stovetop, and a greater mass of copper in this area ensures that the heat will be captured and quickly distributed across the floor and sidewalls. What that means for cooking is that this saucepan is ideal for simmering as it will eliminate hot spots and scorching even in thick sauces. 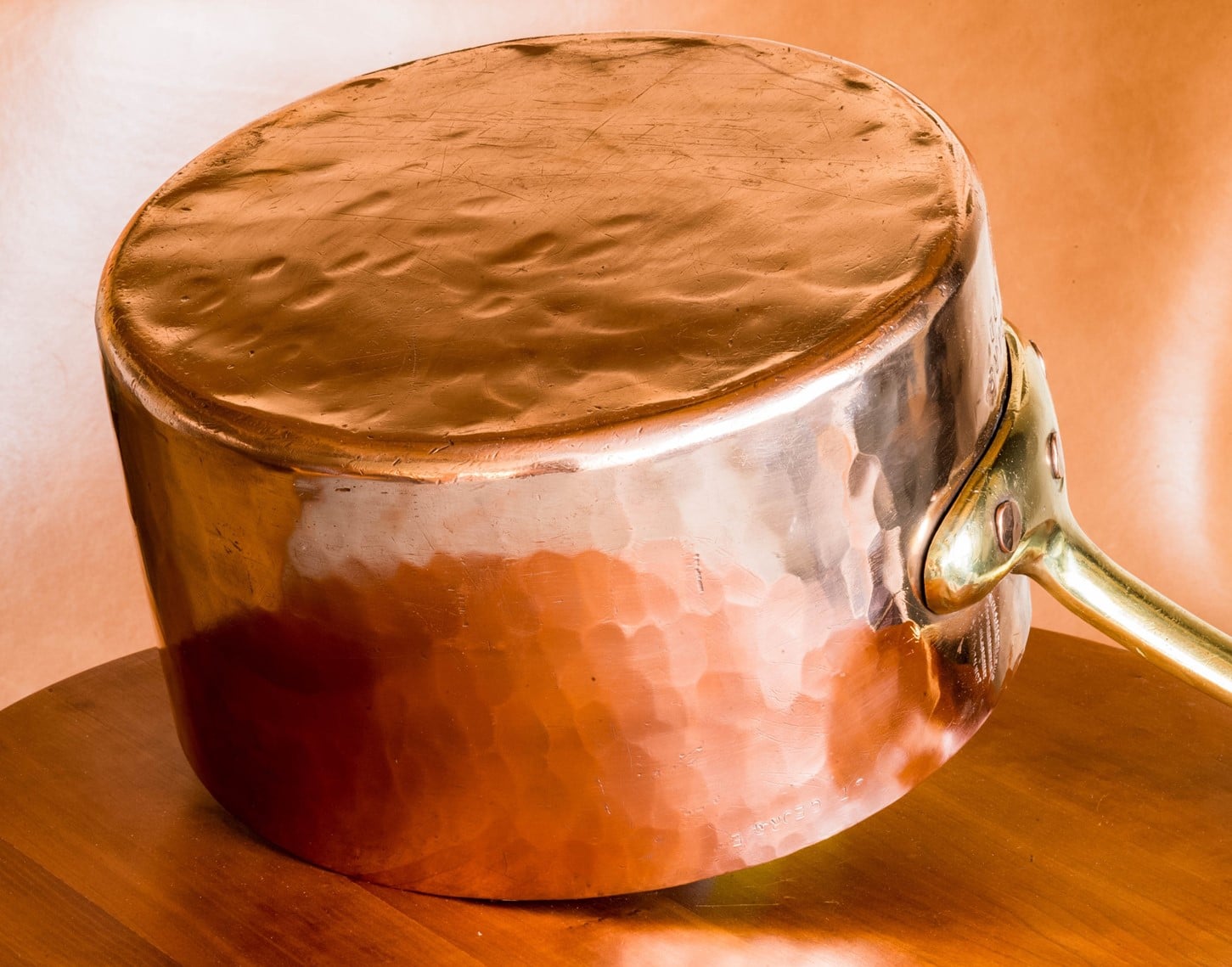 My assessment is that this is an early 20th century piece that combines machine-powered construction with hand finishing. The pan was formed with a machine press — not surprising, given its high thickness — and in such way as to leave much of the mass of the pan in the base and lower sidewalls. It was then hand-hammered across its base and sides to confer some work-hardening to the copper. The external rivet heads have been hand-hammered to give them an attractive faceted look. All in all, the weight and thickness of the piece as well as its hand-finishing make this a high-quality pan.

Now that we have looked at the pan’s construction to get an idea of what kind of piece it is, let’s look at its stamps. This one has a fantastic array and Martin and I have researched them together. 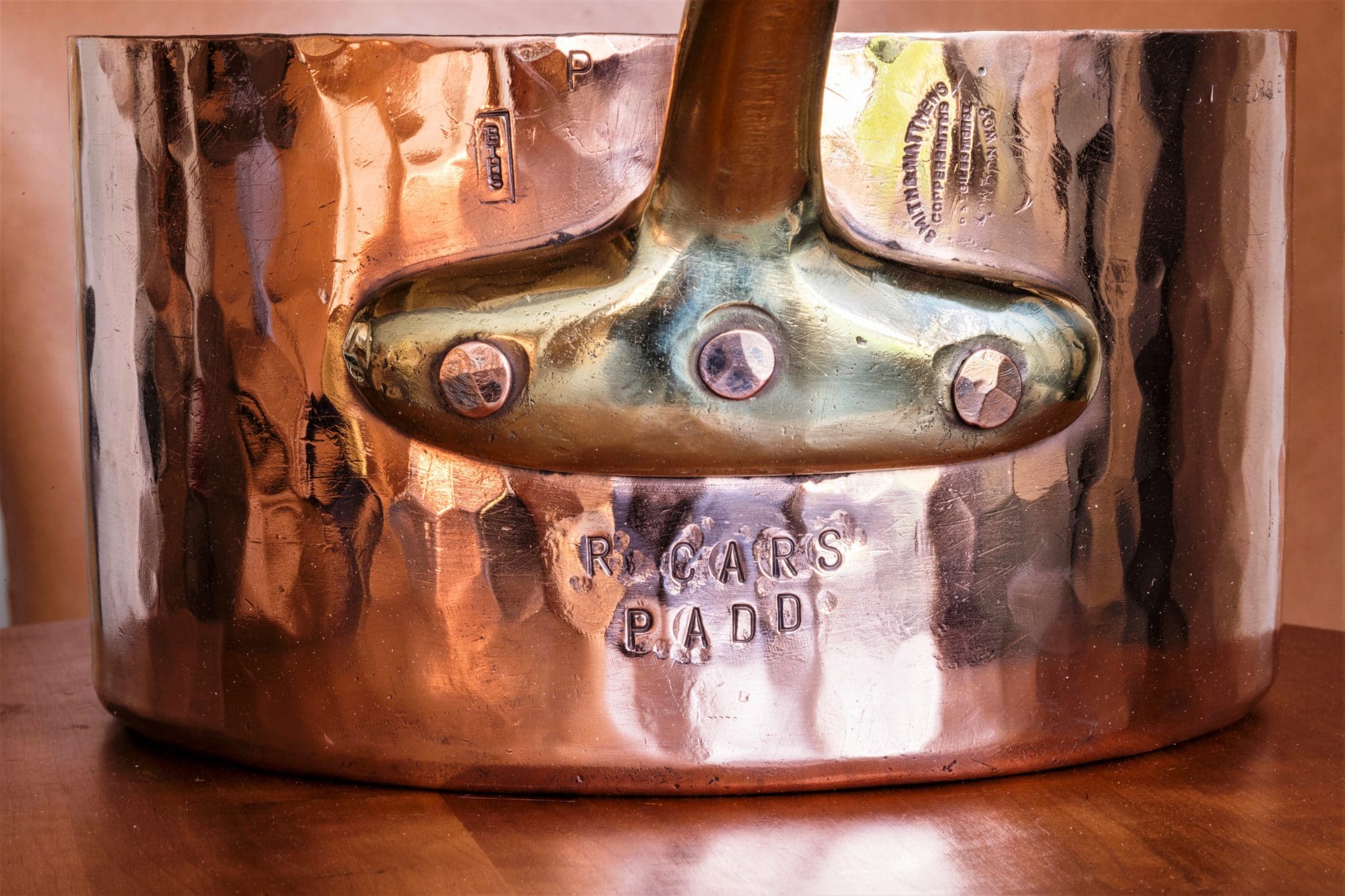 Here are the stamps, the information we’ve pulled together from each one, and the story we think they tell about this pan.

Of the two Saints George, it is the latter — 2923, active from 1907-1934 — that seems more likely to be associated with this pan, but I am still not confident of this connection. It is odd to me that a railway pan would be stamped for a locomotive and not for a kitchen car. I also do not know if 2923 was assigned to a Pullman route during this period, and while there is an impressive quantity of British Rail and Pullman archival data online, I haven’t yet found the rail schedules that would confirm this. If you feel like joining me in this research, I would welcome the company, but bring your space suit — this rabbit hole has taken me straight down through planet Earth and out the other side and now I think I’m floating out in space somewhere near Jupiter.

But back to Earth! Hitching all these stamps together (so to speak), we think this pan was made in the mid- to late 1920s by Smith & Matthews for service starting in 1929 on a luxury Pullman line of the Great Western Railway. It may have been stamped for locomotive 2923, “Saint George,” which was active from 1907 to 1934. After 1931, GWR ended Pullman service and the pan may have gone to the Southern Railway or perhaps stayed with GWR for its other luxury dining trains.

World War II interrupted most passenger train service in England (and all Pullman service), and after the war GWR, Southern Railway, and the Pullman Car Company were all nationalized into British Rail. The BHTS stamp indicates that this pan continued working into the 1950s at least. It’s impossible to say for how long the pan was active before its retirement, but if it entered service circa 1929 and survived to pick up a BHTS stamp in 1953, its career spanned at least 24 years.

What a pleasure it is so see this pot so lovingly restored and still in use almost a century after its manufacture. I’d like to thank Martin for sharing this pan with us, and for his beautiful photographs that really bring it to life.

As always, I’d love to hear from railway fans (and copper collectors!) who could help substantiate or dispute our theories as to when this pan was made and where it saw service. Smith & Matthews pans are few and far between and the history of the company is only sparsely documented — and it’s a real possibility that these pieces are actually Benham make. Please leave a comment if you can contribute to the discussion!