This gorgeous piece is a snapshot of Gaillard’s work at the end of the 19th century. 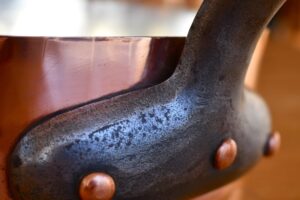 This lovely pan carries the maker’s mark for Gaillard, one of the most prolific producers of high-quality French copper in Paris from the early 1800s through the 1980s.

This particular version of stamp is one I have tentatively dated to the 1890s-1900s based on my research about the firm’s business activities. Relying solely on a stamp to date pieces of copper can be problematic, but in the case of this sauté pan, the stamp and the pan’s craftsmanship come together to point me right at the end of the 19th century. I’d like to walk you through what I see in this pan and then compare it to some others so you can perceive the differences.

First, let’s take a close look at this pan, because it’s really beautiful. Val Maguire at Southwest Hand Tinning did this restoration and she did a lovely job with it.

It measures just a hair over 27cm in diameter, which is a general workhorse size of pan. It’s a perfect size for a family kitchen, but it is quite heavy — I’ve measured at at several points around the sidewalls and it’s consistently 3.8mm thick and weighs just over ten pounds unladen. I recommend a sauté or rondeau of this size as a good first piece of French copper to buy, but to be honest, I wouldn’t recommend one this heavy, as it takes a lot of hand and arm strength to move it around. (Please check out What should I buy? for my opinions and guidance for starting and growing your copper batterie de cuisine.)

One standout quality about this pan is its wrought iron handle. It is instantly recognizable: the metal has dark streaks tracing the contours of the baseplate and handle.

The iron was not poured into a two-piece mold and left to cool, but rather cut into approximate shape and then bent and tugged with tongs and hammer into its final form. The streaks are slag — impurities in the iron — that create a graining effect almost like wood. These grains are technically considered imperfections, but to me they are beautiful evidence of the work it took to make this piece.

The rivets are large and flattened. The exterior rivets have been pounded down almost flush to the surface of the baseplate; the interior rivets are flat and flush-set. I can see no traces of numbers on the rivet heads, suggesting that these were hand-made rivets (and not machine-produced and numbered to standardized sizes). In general, I start to see numbered rivets on pieces that I estimate to be 1880s-1890s or later, but each maker would shift from hand-made to mass-produced rivets according to its individual circumstances. The size of these rivets and their flush settings lead me to suspect they were hand-made, but as you can see, the interior rivets have been hammered tighten them, which could also have obliterated numbers.

But there are additional signs that suggest hand-craftsmanship. There is an unmistakable dot in the floor of the pan — a small round divot in the geometric center, which I believe was left by the point of a compass used to draw the circle in the sheet of copper for the smith to cut out by hand. In addition, this pan also has two beveled facets running around the exterior corner of the base. I believe these bevels were added by hand after the pan was shaped in order to confer additional work-hardening to this vulnerable edge. Bevels are a sign of attention to detail on a pan and in my experience and observation they fell out of practice by WWII.

My assessment is that this pan exhibits a mix of hand and machine-assisted techniques appropriate to the late 19th century. At 3.8mm, it is almost certainly too thick to have been hand-raised from a sheet of metal; instead, I think it was pressed with powered assistance, likely a steam-powered or hydraulic press. But the dot, the rivets, the bevels, and the handle all show that this pan was hand-assembled and finished. This is congruent with my understanding of the state of the copper industry in France from 1850 to the early 1900s.

I have a three other 26-28cm sauté pans that I’d like to compare to this one so you can see the differences.

In the photo below, the pan on the left is a 28cm sauté stamped for Dehillerin that I believe is roughly a contemporary of this Gaillard sauté on the right. The Dehillerin is 2.5mm at the rim but it is unbelievably heavy — it weighs 5350g (11.8 pounds), more than a pound and a half heavier than the 3.8mm Gaillard. This Dehillerin is also a small-scale restaurant-grade piece.

As you can see, the interior rivet treatments are quite different: the Dehillerin rivet heads protrude slightly while the Gaillard’s rivets are flush-set. It looks to me like the Dehillerin’s rivets had mushroom-shaped heads — characteristic of mass-produced rivets.

The photo below shows the texture contrast a little more clearly, but what I also would like you to note is how beautifully the baseplate on the Dehillerin has been finished. There are no visible file marks — if the casting left seams, they were completely effaced.

Some additional similarities and differences: the Gaillard has a dot, while the Dehillerin does not; both pieces have lovely beveling. (I am realizing now as I write this up that the pans keep switching sides in the photos — I apologize. I walked around my table for the photos and it didn’t occur to me also to rearrange the pans to keep a consistent left/right orientation!)

I cannot say for sure which of these two pans was made before the other, but the Dehillerin has more “modern” craftsmanship: smaller mass-produced rivets, a cast iron handle, and no dot (suggesting it was machine-cut and not hand-cut). But these are both pieces of the “golden age” of French copper and they are beautifully finished.

For our second comparison, I’ve set the Gaillard next to an unstamped 28cm sauté. This unmarked piece is a burly 3.5mm at the rim and weighs 4604g, just 2 grams more than the 27cm Gaillard. (This makes sense: The slightly smaller Gaillard is slightly thicker at 3.8mm, so they end up at about the same mass.) But my estimate is that these two pieces are at least fifty years apart in age.

Let’s look at the interior rivets. The difference is immediately obvious: while the 27cm Gaillard on the left has flush-set flat-head rivets, the 28cm piece on the right has mushroom-head rivets with size numbers clearly visible. These are mass-produced rivets, not handmade.

Now please take a look at the two baseplates side by side. The handle on the unstamped sauté on the right is cast iron and somewhat roughly finished — you can see rasp marks around the shoulder of the baseplate.

Set the two baseplates a little closer together and you can see how the exterior rivets on the unstamped sauté on the right have been formed into a conical shape. This type of finishing is characteristic of a riveting machine with a self-centering rotating peen.

Next, please look at the edge of the base. While the 27cm Gaillard on the left has bevels, the 28cm pan on the right does not — there is a perfectly smooth curve from base to sidewall. I struggled mightily to capture this in an image and the best I could do is the photo below.

In my opinion, this unstamped 28cm saute is definitely a 20th century piece, almost certainly post-WWII, and likely 1960s-1980s. Its craftsmanship speaks to me of mass production: pre-made rivets, a serviceable if slightly rough filing of the cast handle’s seams, and a riveting machine that automatically applies a “perfect” conical head to the rivet. The extra step of applying bevels to the edge of the base is skipped altogether. This pan’s production process prioritized speed and efficiency.

But mass production does not necessarily imply lesser quality, just lesser time. Much as I make a big deal about flush-set rivets and handle graining and all that, it’s the copper that matters most. And this pan has got it where it counts — 3.5mm is a truly extravagant amount of copper. If you’re looking for one of these, look for mid-20th century Mauviel (which this pan likely is), either unstamped like this one (shop by weight!) or marked for Williams-Sonoma, Chomette-Favor, Verbeelen, or Matfer. (There are likely a few more names but these are the most common.)

I’d like you guys to give this one a try. Here is an unstamped 26cm sauté pan, 2.5mm at the rim, weighing 3282g (7.2 lbs) — a true 2.5mm thickness throughout. I’ll provide the same photos as above with a couple key observations — I don’t believe in gotcha setups, so I’ll do my best to give you more than enough information to get a feel for this pan’s craftsmanship relative to the 27cm Gaillard.

I have looked carefully and I do not believe I see any numbers on the rivets of the 26cm piece.

Here is a closeup view.

Here are some more bonus pictures of the handle and baseplate.

I have looked carefully and I do not believe I see a dot in the 26cm pan.

There are three beveled planes on the 26cm piece.

Now that you’ve looked at these photos, what do you think? Was this 26cm sauté pan made earlier than, about the same time as, or later than the 27cm Gaillard? What differences do you see between the two of them, and between this pan and the others above?

I’d love to hear your thoughts in the comments. And if you like, you can see what I think about it below.

Click here when you're ready to read my opinion.

To answer my own question: I think this pan was made around the same time as the Gaillard but with slightly more modern craftsmanship techniques.

This 26cm sauté has many elements of craftsmanship of a late 1800s. I see signs of time-consuming hand-work here, most notably the three beveled planes around the base. But it also shows signs of industrial tools: it has no dot, which suggests (but does not prove) that the copper was machine-cut; and at 2.5mm thickness it’s more likely to have been machine-pressed into shape as well, but I’m not absolutely certain about that.

One thing I like about this example pan is that the handle is cast iron that has been so well-finished that it could be mistaken for wrought. Note how the close-up photos show tiny lines running along the surface — I don’t think these are slag grains in wrought iron, but rather evidence that the surface has been smoothed with a file or rasp. It’s cast iron but with an extra level of finishing to give it the pleasant feel of wrought.

Lastly, please allow me to take this moment, at the end of 2020, to thank you for your readership. This site has been a refuge for me during this difficult year; your comments and emails have given me a sense of connection and community that has sustained me. I am so grateful to all of you.