This pan is a beast.

I love 19th century French copper for its handcrafted feel, but even an antiquarian such as myself must admit that machine-made copper from the early 20th century can be just as spectacular. During the early decades of the 20th century, supply and demand aligned in France and Europe to create the circumstances for a boom in production of super high-quality copper cookware for the restaurant industry. On the supply side, heavy metalworking machinery developed during the industrial revolution and perfected for the production of WWI armaments created processes to cut and shape super-thick copper sheet; as for demand, the European economy that had boomed during the Belle Époque (1870-1914) suffered during the war effort but was back on its feet by 1921 for the années folles (“crazy years”) of the Jazz Age. Paris was the epicenter of culture and entertainment and every café and salon alight into laughter and music into the wee hours also had a kitchen in the back bustling and banging to keep the courses coming.

And that’s what I have to thank for the existence of this extraordinary saucepan.

And what’s extraordinary about it is that it is truly 4mm thick. I measured it at several points around the rim and it does not vary. It weighs 10030g — a hair over 22 pounds unladen — and I assess that it’s consistently 4mm throughout.

Per Roger’s request, here are some more detail shots of the handle. The rivets are small rounded buttons; the interior rivet heads are flat, almost flush. I can’t detect any trace of numbers on the rivet heads.

It is absolutely seamless.

I think there would have been only one way to make this piece, and that would have been with a very strong die press. This process is called deep drawing: a flat disk of copper is placed in a metal press and punched with a die to form a three-dimensional shape. (The French term is emboutissage, and I wonder if the term encloses the word bouche, for mouth.) The diagram on the right shows the process in action — it’s animated, so please click it if you’re not seeing the motion. There are many different configurations of metal press but the process is the same: flat blank, a die shape, and a piston to force the die against the blank and form the desired result. 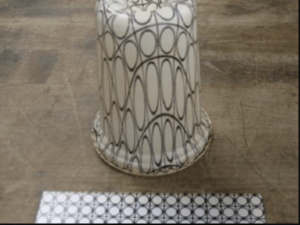 Deep-drawing a pot this large from a sheet of copper this thick would have been quite a feat. The metal has to bend and stretch into the shape — it is said to “flow” like a liquid. This process exerts considerable force on the metal; observe how the regular surface pattern of the flat sheet in the photo at right is distorted in its final form. 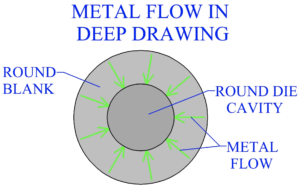 In addition, the straight-sided saucepan shape forces the metal to flow into a cavity that is smaller than the diameter of the sheet metal. The diagram at right is a top-down view as if you were watching a metal press from above. As the central circle — the die — presses onto the sheet, the metal flows towards it, compressing as it approaches the die and then stretching down the sides of the cylinder. Copper is better than most other metals at withstanding these changing stresses without cracking, but even so, a great deal of force is required.

The maker’s mark on this piece is for Jules Gaillard. I believe this stamp came into use after Jules and Émile Gaillard (of J & E Gaillard) parted ways in about 1919, and was in use into the 1930s. At the moment I believe Jules Gaillard passed away sometime by 1939 or so; pieces with his name represent, to me, the last golden period of French copper before the devastation of World War II. I have come to appreciate 1920s and 1930s copper as products at the pinnacle of French technical expertise and aesthetic distinction, and this super-thick pot is a standout among them.

This post has been revised in early November 2021 to correct my error as to the date of this Gaillard stamp.