Gratin pans are common in the French batterie de cuisine for good reason: “gratin” is the French term for the beloved cooking method of spreading food in a shallow layer, topping it with breadcrumbs or cheese, and then baking or broiling it in the oven. A dish au gratin or gratinée will be served piping hot with a delicious golden brown crust. 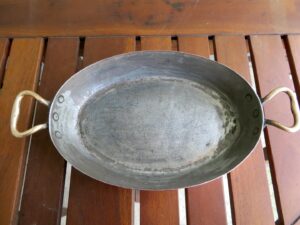 Traditionally a gratin pan has short handles, either the classic D-shaped handle or rings (anneaux) that make it easy to tuck the pan close to the heating element. But this pan is also useful on the stovetop as well. This same oval body with a protruding stick handle at one end called a fish pan (poêle à poisson or à truite), so that you can lift the pan away from the heat — convenient to manage a gentle poach or, conversely, a quick hot fry. If you use your gratin on the stovetop, keep potholders or a side towel at the ready because the short brass handles will get quite hot along with the body of the pan.

All that is to say that the antique and vintage French copper market usually features a steady supply of gratins, fish pans, and egg pans (the round variant) because these pans are handy to have in the kitchen. This particular one belongs to reader Stephen Whalen and in addition to being a nice useful size in very fine shape it also has two interesting stamps.

The first is a Jacquotot maker’s mark that I have not seen before. Please take a look. The stamp has been softened with wear but the street number — 130 — is still legible, and that is the starting point. My research into historical business records suggests that Jean-Baptiste Jacquotot opened his business around 1909 or so at 97 Rue de Grenelle and then shifted the business to 130 Rue de Grenelle from 1914 to 1921. It was not until 1921 that Jean-Baptiste acquired the neighboring property at number 128, and stamps after that acquisition read “128 & 130 Rue de Grenelle.” In my opinion, the number 130 clearly visible at the start of the address line places this stamp in the 1914 to 1921 timeframe.

There are three “130 Rue de Grenelle” stamps of which I am aware and I think it’s interesting to look at them side by side. As above, I think all three represent work between about 1914 and 1921. On the left, at top, is the very rare “Jacquotot & Dehillerin” stamp that I believe refers to a joint venture between those two houses; below it is the more common Jacquotot stamp that I believe marks main-line Jacquotot work of the period.

To my eye, the Jacquotot stamp on Stephen’s piece is a stylistic bridge between the other two stamps: the plain typeface is similar to the J & D stamp, but 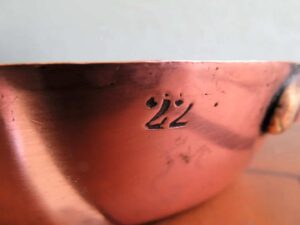 the arrangement of name and address matches that of the main-line Jacquotot mark. I am not certain whether we can extrapolate any information from these observations and I would welcome reader opinions. Could this stamp be a temporary one used for a brief period of time? One thought I had was whether this piece could be the product of a separate workshop, but Stephen’s piece also carries a “22” stamp that is very similar to the typeface used on other Jacquotot pieces. Though the maker’s mark is a rare version, the number stamp is recognizably Jacquotot.

This gratin carries an owner’s stamp reading “Grosvenor Hotel” and the most likely candidate is the beautiful edifice built in 1862 on Buckingham Palace Road in London. (The similarly-named Grosvenor House Hotel did not become a public hotel until 1929.) The Grosvenor Hotel was the first “railway hotel” built conveniently close to Victoria Station and has been in continuous operation since its opening.

I’d like to thank Stephen for sharing this lovely gratin and for noting its rare stamp. Readers, what are your thoughts on the significance of this third Jacquotot mark?