This working kitchen provides a different sort of inspiration.

Buckingham Palace, the seat of the British royal family and the “administrative center” of the government of the country, is one of the most famous and thoroughly-photographed buildings in the world. Built in 1703 as Buckingham House, it became the official London residence for Queen Victoria in 1837. The building has been expanded several times over its history and now consists of almost 830,000 square feet (77,100 square meters) of floor space and hosts state visits as well as hundreds of thousands of tourists each year.

Despite the public’s long-standing fascination with and appreciation for this edifice, apparently nobody has thought to discuss the kitchens with any level of detail. I don’t even know exactly where the kitchen is located. To the best of my knowledge, the kitchen is on the ground floor of the Central Block, the oldest portion of the building, just below or near the large state dining room off of the western end of the gallery. (This would make sense — a kitchen would have been built into the original house, located as close as feasible to the dining areas.) The diagram below on the right is an amateur reconstruction of the floor plan of the Central Block as built in 1847, and my best guess is that the kitchen occupies the space labeled “service area” on the 1st floor, just left of center on the lower of the two floor plans.

Photos of the kitchen depict an admittedly charmless space. The floor is utilitarian white tile and the low ceiling is darkened by a steel grid with fluorescent lights; kitchen staff work at a series of stainless-steel islands similar to what I’d expect in a large professional kitchen. There is nary a glimmer of natural light to be seen, supporting the conjecture that this room is the windowless “service area” deep in the Central Block. I couldn’t find many panoramic images but here is a fair representation. 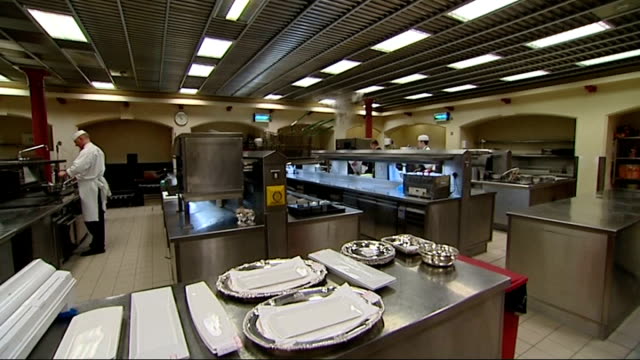 The room has alcoves along the walls for storage space and this is where this kitchen’s collection of copper pots is stored. (You can see one copper alcove at the very right edge of the photo above.)

I believe the photo below depicts the pots in one of those alcoves. I would expect the royal family would source their copper from Britain and that’s exactly what I see here. The brass handles have the split baseplate style that I associate with the English makers, and the two larger saucepans on the right have iron handles with the arrowhead baseplate. (Note that the saucepan on the far right had a significant repair — it looks as through the handle may have been torn off at some point and re-attached with a patch!. The iron-handled pots on the left, however, have a mix of handle styles: some have three rivets in a row, some have triangular baseplates, and then there’s one with an arrangement of four rivets that I haven’t seen before. It may well be that these are examples of English makers that I haven’t encountered. Several of the pieces retain the English style of tinning with an inch-wide band of tin around the outer rim.

That oval stewpot in the center of the upper row in the photo above has an elaborate engraved monogram for King George IV and carries the maker’s mark for Bennington. (This photo is watermarked for the stock photo company Alamy.) I also spot what I suspect is a repair at the base of the cramp seam.

The photo below from an Express story on the preparations for Prince William’s wedding in 2011 shows more of that copper alcove. There are two shelf units in it with a total of three horizontal racks. Note how deep the shelves are in order to accommodate the more massive items. 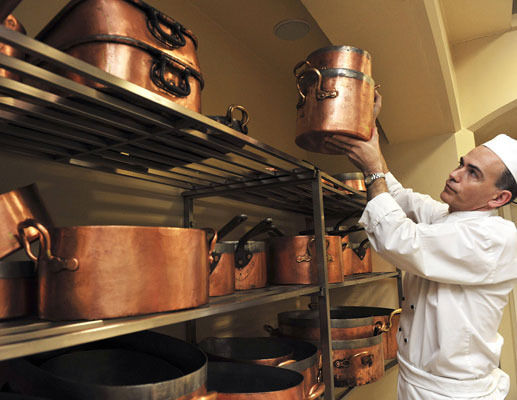 There is at least one additional copper alcove with a different assortment of pans as shown in the photo below (watermarked for Getty Images). The shelving units are not free-standing but are instead bolted to the wall. I am surprised to see this — that is quite a lot of weight to support! 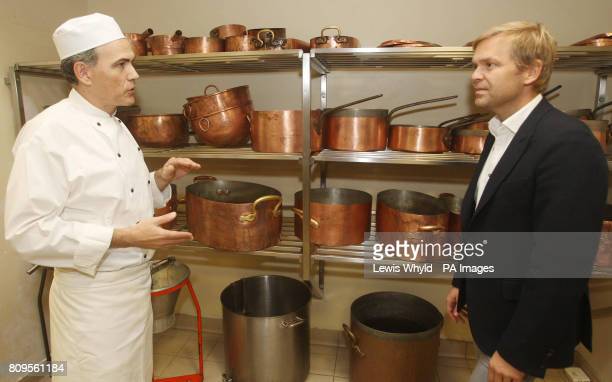 The photo below, taken in 2016, shows a large pot in use to prepare a banquet for the visit of the president of Colombia. I would estimate that is a 40cm (15.7 in) stewpot. It’s gorgeous, and its twin is cooking along right next to it. I love to see these monumental pieces in use.

This kitchen presents an interesting contrast to its sister at Windsor Castle. On the one hand, the Buckingham kitchen with its workmanlike steel fixtures and fluorescent lighting looks dreary next to the soaring light-filled space of the Great Kitchen at Windsor. And yet the shelves of jumbled copper pots at Buckingham strike me as more authentic than Windsor’s high-hung specimens. The pots at Buckingham aren’t on display per se — I don’t think the palace tours ever get to the kitchen. They are kept on open shelves within easy reach because they are used.

Truth be told, I find Buckingham to be more relatable (and inspiring) than Windsor. Don’t get me wrong, of course — I find something to appreciate in each and every copper-using kitchen. But I must admit that I sense a sort of fellow-feeling in Buckingham’s attitude. I started this site with two essentially opposing impulses: to inspire reverence for the antique and vintage copper we still have, but also to encourage regular people not to be afraid of using it, even for such mundane things as heating up a can of soup on a quiet Wednesday night. Of course, a Wednesday night at Buckingham Palace is likely a far cry from what most of us have to contemplate, but that is beside the point: these photos show me that copper plays an integral role in how this kitchen functions. I can think of no greater inspiration than that.