This newly restored pot is so beautifully proportioned that it doesn’t quite come across in photos just how enormous it actually is. 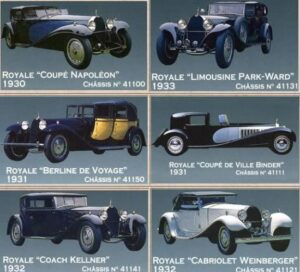 I once had the opportunity to see the Bugatti Type 41 “Royales” in person. The Royales are six beautiful vintage automobiles built in the early 1930s and intended for royalty, as their name suggests; they were individually coach-built for extravagant luxury and powered by an enormous 12-liter, eight-cylinder engine to get their seven thousand pounds up to 125 miles an hour.

But if you can look past their obvious fabulousness, there is something quite subtle going on with these cars. While they remain the largest production automobiles ever built — about 20% taller, wider, and longer than a normal car — each one is perfectly proportioned. Every element of the car is correctly sized within the overall design, from the length of the bonnet to the size of the wheels to the spread and sweep of the wings. Despite their obvious grandeur and luxury, each car looks graceful and balanced — a real car that you can imagine sitting in and driving.

It’s not until you stand close to one that you realize that its perfectly-proportioned tires came up to your waist.

That is the magic of exquisite design: no matter its size, it looks right. And I think this Gaillard rondeau has the same quality. Like a Bugatti Royale, it is an object intentionally made larger-than-life but still usable at a human scale. The body of this rondeau is 50cm across — almost twenty inches — but it has the same proportions as a normal-sized pan. Take a look at the photos below — on the left is this pan, and on the right is a 32cm rondeau. By volume, the 50cm is three times larger than the 32cm, but do they look that much different?

But when you place this pot next to others, you get a better sense of its true size. The photo below shows this 50cm Gaillard next to a 28cm Bourgeat rondeau for scale.

This beautiful piece belongs to reader Stephen Whalen and I am honored to showcase it. He acquired it recently from the Champagne region of France and he is sharing photos of it prior to and after restoration. Here is how the pan looked when he unpacked it.

Of special note is that the base looks to be quite flat, which is a pleasant surprise for a large pot like this. The expanse of copper making up the base of a large diameter pot is unsupported, and I’ve seen (and own) several where the base has stretched from misuse (perhaps repurposed as a bucket to carry heavy things). A convex base on any cooking pot is an inconvenience that should be addressed, but while a good retinner can pop the base back in to help the pan sit flat once more, it’s not possible to compress the stretched copper back into a perfectly flat surface.

The base of this pan, however, looks to be in exemplary condition. It has a slight inward curve but I think that is an original and intentional structural element of the pan; a bit of concavity like this would help support weight and resist collapsing.

Judging by the stamp and its modern construction, I think this is a 20th century pan, likely made after World War II. There are no dovetails; I suspect the pan this size would have been assembled like a stockpot with a base piece welded to a cylinder to produce strong and effectively invisible seams. The interior rivets show a flat facet that I believe indicates a powered riveting machine was used to attach the handles.

Tin linings are perishable and the lining of this pan and its lid are shot. Steve sent the pot to Jim Hamann at East Coast Tinning for restoration, which I think was a fine decision. Below you can see the lining as it was prior to restoration.

Here is the pot after restoration. Jim’s tinning work has a lovely pearly sheen.

Steve provided a few more before and after comparison photos so you can see the restoration.

The interior rivets had a bit of copper showing at their protruding points, which I see often in older tinned pans.

This version of the Gaillard stamp appears on pots I believe to be mid-20th century, up until Gaillard’s closure in the early 1980s.

This is a really lovely 50cm pan, and with its restoration it is ready for another century of use. I’m grateful to Steve for for making the investment to restore this pan and sharing these photos with us. It’s a beautiful example of French craftsmanship and design aesthetic in the mid-20th century.