Like H. Pommier himself, this saucepan has a lot of Van Neuss DNA in it. 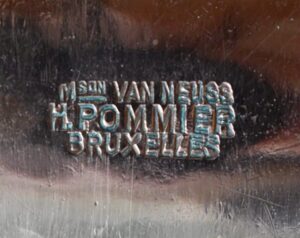 H. Pommier, a chaudronnerie based in Brussels during the early 20th century, was the descendant of Van Neuss in the 19th. The chaudronnerie Van Neuss began in Brussels in 1820; Gérard-Michel Van Neuss, son of the founder, passed control of the firm in 1901 to his grandson Hippolyte Pommier. Craftsmanship from the early period of Hippolyte’s tenure carries the name “Van Neuss” alongside his own; at some later point the firm shifted to stamping its work simply “H. Pommier Bruxelles.” (I cover the history of Van Neuss and Pommier in more detail in my field guide.)

The stamp on this pan carries both the Van Neuss and Pommier names and based on what I see in its craftsmanship and design, I suspect it was produced during the first years of Hippolyte Pommier’s tenure.

First, please take a good look at the handle’s baseplate: a slender rectangle with rounded corners and a flattened profile against the pan.

Now compare the design above to the two “genetically related” pans below. Number 1 on the left is stamped “GM Vanneuss” and was made between 1880 and 1900, before Gérard-Michel Van Neuss passed the firm to Hippolyte Pommier in 1901. Number 2 on the right was made later — it’s stamped “H. Pommier” and I believe it’s from the 1910s to 1920s. Which of the two handle styles below more closely resembles that on the Van Neuss-Pommier saucepan above?

It seems clear to me that for a period of time Hippolyte Pommier used the same handles as Gérard-Michel Van Neuss before transitioning to a more rounded, bulbous style. This bit of Van Neuss DNA in my saucepan suggests that it was early Pommier production, perhaps the first few years after Hippolyte began to run the firm in 1901.

Incidentally, the handle also has an unusual notched keyhole hanging loop. This makes three hanging loop shapes I’ve seen on iron-handled Van Neuss and Pommier pieces: the Van Neuss stamped pieces I’ve seen have a rounded teardrop (number 1 below); my own Van Neuss-Pommier saucepan has a notched keyhole (number 2 below); and later Pommier pieces have the French teardrop style (number 3 below).

Another piece of 19th-century Van Neuss DNA in this 20th-century pan is the dovetailing around its base and up the side underneath the handle. It is, in my experience, a little unusual to see a dovetailed saucepan in the 20th century. My observation is that many small- to medium-sized French saucepans and sauté pans of the 1880s and thereafter were at least partially machine-pressed or spun; dovetailing persisted into the early 20th century for unusually-shaped pieces — oval cocottes, rectangular daubières, large deep stockpots and the like — but a simple saucepan like this one would have been pressed or spun on a lathe. Of course, this pan is Belgian, not French, and so by the looks of things the Belgians were slightly behind the French in their rate of adoption of industrial techniques.

This pan carries three sets of owner stamps: “LOG” and “E.L” to the left of the handle, and “PM” to the right. The typeface of each stamp looks quite similar to my eye, suggesting that they were stamped around the same time or by the same place.

You will notice that I have not had this pot retinned. It’s my practice to consider sending a pot for restoration when I buy it because it saves time, hassle, and expense, but I don’t automatically send everything. This pot is a collector piece for me, so its dark tin was not a concern — I don’t need this pan to be stovetop-ready. I also felt that it was in stable physical condition; there is no corrosion around the handle and it does not have serious dents. That said, as you can see below, it is definitely out of round — copper pots tend to get dropped every now and then, and at 1.8mm thick, this pan is vulnerable to deformation. A skilled retinner can fix dents, correct wonky geometry, and clean away corrosion around handles, but the process is also a bit stressful for antique pots, and for this one I didn’t feel it necessary. (If you like, you can walk through my decision tree for retinning.)

I think this particular saucepan captures a transitional moment — a sort of missing link between Van Neuss in the 19th century and Pommier in the 20th, if you will forgive me for extending the analogy. My curiosity is growing about Hippolyte Pommier and how he transformed his grandfather’s chaudronnerie. Copper stamped “H. Pommier” is relatively difficult to find and pieces stamped for both Van Neuss and Pommier are rarer still. If you have examples I would be very grateful if you would share photographs with me — my field guide to Pommier (like the entirety of this site!) is a work in progress and I am always seeking to improve it with better information.