Is this an 18th century chocolate pot?; a black-painted interior; a truly enormous stockpot; a glyph stamp that needs investigation.

I bought an antique copper chocolate pot but I cannot find a similar one on the web, and I am wondering about its age and origin. We can read on the front “Brugge Anno MDCCL”. I don’t know if this could be the place and date of its manufacture (Belgium 1750)?

This is an absolutely beautiful piece. Congratulations on acquiring it. It is just lovely and the decorative hand-work is extraordinary.

It’s possible this piece was made in 1750, and if so, it’s quite a precious relic. I see beautifully made dovetails around the floor of the pot and very subtle dovetails up the side under the handle — it took me a while to spot them because they have been covered with decoration as well. To my eye this is an exceptionally well-made object. My limited experience with 18th century copper is that this is finer craftsmanship than I have seen on pieces of this era; either it was made by a true master coppersmith, or it is a 19th century piece made to commemorate an event in 1750. Either way, it is a really lovely thing, and I am glad that you have it and appreciate it.

I did some poking around the internet and the two shield symbols are the heraldic crest of West Flanders, which is the province of Belgium where Bruges is located. But I can’t establish the significance of the date 1750 either in the history of Flanders or for the city of Bruges. At that time Flanders was under the dominion of the Austrian House of Habsburg; Empress Maria Theresa and her husband Francis I would have been in power, but I can’t identify an event in 1750 that would seem worthy of a commemorative piece. My best guess at this time is to note that 1750 was the birth year of Francis, Duke of Saxe-Coburg-Saalfeld; he was the father of Leopold I who would come to be the first King of Belgium on its creation in 1830. However, if this piece were created retrospectively to commemorate the birth of Francis, I would think that it would bear that family’s crest instead of the crest of Flanders on it.

One interesting element is the prevalence of grape symbols all over the piece. The grape was a Renaissance symbol for Christ; perhaps this piece was made for a devoutly Christian household or a religious facility of some kind. However, despite its decorative grape motif, it is a chocolate pot — the lid of the piece has a slide-away cap cover for the hole through which the stirring stick would have been inserted. That’s something I’ve only ever seen on chocolate pots to help melt the solids.

Readers, do you have any thoughts on the age and origin of this pot?

What you make of this? The pot is middling quality but seems to be painted black inside including the lid. The only mark is the number “18” in an older script. Do I strip out the black paint with stripper?

Wow, that is strange. My immediate thought is that someone applied enamel spray paint to it as a quick cosmetic fix to make the tin look better in order to sell it. I fear you will have to strip out the paint or whatever it is. I doubt that paint is food safe, especially if the pan is heated up on the stovetop.

Any help with the history of the pot would be greatly appreciated.

L’Écu de France is a French restaurant outside Paris that has been operating since 1717, and I think it’s quite likely your huge stockpot came from there. If this is the case, it seems likely to me that the “EF” is for “Ecu de France” before the pot was re-stamped with a custom stamp with the restaurant’s full name.

My gut on this piece is that it is early 20th century, and pre-WWII. The dovetailing is an interesting clue for two reasons. Firstly, the fact that it’s dovetailed instead of welded; my research suggests that welding started to overtake dovetailing around WWI, but dovetailing stayed in use for a period of time and most commonly with really big pieces like this one. The other interesting clue is where the dovetails are located. Usually dovetailed stockpots were joined around the edge of the flat base, but yours is joined around the lower sidewalls, and that is where the seam is located on welded pots. In other words, your piece was cut and assembled like a welded stockpot, but instead of being welded, it was dovetailed. This suggests to me that this piece was made during a period of time when welding was available but for some reason this piece was dovetailed instead. I suspect the size of the piece may have had something to do with it.

I don’t see bevels around the edge of the base, but I don’t know if bevels would have been applied to a piece of this monumental scale — I usually see bevels on smaller pieces that were banged around the stovetop, and this is clearly not a very mobile item! The other clue I want to consider is the design of the brass handle. The shape is definitely French but the details of its shape and the dull type of finish look like other pieces I have tentatively dated to early to mid 20th century.

So — my best guess is that this is a 1920s to early 1940s piece. It’s marvelous that it has survived. I am so glad that you plan to keep it and appreciate it — I am sure it will be very happy to join you in your family room!

I was recently invited to share a bottle of wine with neighbours of a friend and couldn’t help admiring a copper pan the gentleman had. Please see attached photos. If anyone could provide any information about it I would be delighted as I am sure that the owner would be.

This is absolutely marvelous. What a glorious piece. It’s fabulous.

Saillard is one of the lesser-known Parisian makers — I’ve only seen a few of their marked pieces. They seem to have come into business in the 1920s, which is unfortunately when the regular archived records I can consult online start to peter out. The earliest business listing that I am reasonably certain represents this company appears in 1922: “Saillard, étameur, Rue de Saint-Simon 8.” The next two available almanacs in 1925 and 1928 list “Saillard, étameur” at 76 Rue Vaneau (sometimes rendered Vanneau). Then there is a gap until 1935, and no Saillard that I can find in the copper business. I was able to find record that “Saillard Père et Fils” composed of Joseph Eugène Saillard and Pierre Paul Saillard, both living at 76 Rue Vaneau, was dissolved in 1940.

What is curious is that there appears to be some overlap with the retinning (and eventual retail) business that Francis Lejeune operated at the very same address. The Lejeune company history claims that Francis opened his store at 76 Rue Vaneau in 1930, but the Saillard business (and two Saillards!) continued also at the same location until 1940. Perhaps Francis began working for Saillard in 1930 and gradually took over the business, perhaps retroactively claiming that it had been under his leadership since 1930? I do not know!

In any event, the Saillard stamp on your friend’s piece appears to point to the 1920s, possibly into the 1930s if there was some overlap with Francis Lejeune. I am not confident that Saillard was a true chaudronnier who made pots — the business listings say étameur, and Lejeune that followed at the same location also never made copper. If that is the case, then the Saillard stamp on your friend’s piece is not necessarily a maker’s mark but more likely a store stamp.

So who made it, and when? It’s dovetailed, which suggests it’s a late 19th to early 20th century piece — if it is truly thick copper (and it looks it), it would have taken quite a powerful metal press to make it, and without access to that level of machinery, dovetailing might have been a more expedient way to join it. The handle looks like cast iron to me and not wrought, which again points to the late 19th century or later. My guess? 1900s to 1920s, and if it’s a monster, then possibly it came from Gaillard or Jacquotot or one of the makers focusing on high-end kitchenware. 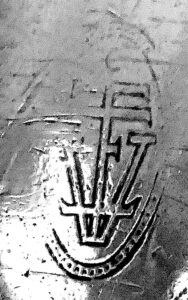 And that second stamp — I have no idea! I took a snapshot of the stamp and modified it to increase the contrast and heighten some detail. It looks like a custom glyph make to combine multiple initial letters for an organization of some kind. As shown in the photos above, the pot also has the plain letters T and E stamped on it as well. I think I see a T and E in the glyph, and the letter V.

Readers, what do you think? Have you seen this mark before?