Readers Martin and Nick figured out the provenance of the monogram on this little pot. 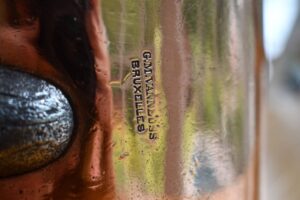 This petite saucepan is the work of Van Neuss, a coppersmith in Brussels and the antecedent of the famed Pommier. The firm was founded in 1830 by Michel Van Neuss, and my study of business records suggests that his nephew Gérard-Michel took the helm of the company from 1880 until his death in 1901, after which his grandson Hippolyte Pommier took over the firm. As will be discussed in greater detail towards the end of this post, I believe that this pan was made by Michel Van Neuss between 1835 and 1865, and subsequently stamped by his nephew Gerard-Michel, perhaps when the piece was serviced for retinning.

In support of that research, the pot itself carries signs that it was made in a prior era.

First and foremost, this is a 15cm piece — an odd size, literally and figuratively. By the early 20th century, French and Belgian pieces were standardizing to even centimeter increments — 12, 14, 16, and so forth. (As reader Nick points out, Gaillard still offered odd-size casseroles in its 1914 catalog; the Jacquotot 1925 catalog provides only even increments.) I suspect this had to do with the shift from hand-cutting copper sheet to machine-pressing. Prior to that shift, the smith judged the size of the pieces as he went and the result often ended up being somewhere in between an exact dimension. This is just fine for cooking, of course, but unless the smith also made a lid for the pot, finding a fitted lid can be a challenge. (This may be why many lids of that era are the flat lollipop style, the “universal lid” that will fit any pan smaller than itself.) One of the benefits of shifting to die-pressed manufacturing that produced perfectly consistent pots and lids was that they are all guaranteed to fit each other.

Another sign of this piece’s antiquity is its proportions. Take a look at this bright shiny 15cm pan in between my modern-era 14cm and 16cm pans.

Notice how this 15cm is so much taller than the others. It’s a style of saucepan that seems to have been more common in the 19th century, but that was disappearing by the early 20th. I consider this a casserole russe, distinct from the shorter casserole we know today. (Nick adds that Gaillard still offered casseroles russes in 1914; the Jacquotot 1925 catalog conflates russes with casseroles à jus.) The origin of the russe is service à la russe, the innovation introduced in 1810 by the Russian ambassador to France at a sensational dinner in Paris. I do not know when the tall proportions of the casserole russe gave way to the squatter shape of the casserole, but it seems reasonable to me to suppose that the same shift to machine-cutting and -pressing also drove standardization to the proportions of pieces as well.

And there’s also the handle. It is made of wrought iron, and for a type of metal that is supposed to have grains, it is an exceptionally grainy example.

Wrought iron contains streaks of slag — impurities that are usually hammered out of the metal through a process of heating and hammering it. As the iron is worked — that is, wrought — into its final shape, the slag creates streaks called grains that follow the contours of the shape. The best place to look for grains is on areas where the metal has been worked the most: the baseplate, the underside of the curve of the handle shaft, around the hanging loop.

But this is the grainiest wrought iron I’ve ever seen. Compare the photos above to some other examples below.

There is yet another odd quality to this handle: it is undersized. In the photos below, this 15cm saucepan is on the left, and on the right is a 12cm early Legry (likely 1896 to 1910 or so, also with a wrought handle). The Legry is a smaller pan than the Van Neuss, but its handle is much burlier. In my opinion, the handle on this 15cm pan would be more appropriate for a smaller piece.

This would not be a big deal but for the weight of the pan. I measured the rim at 2.2mm and the piece weighs 1570g, about 3½ pounds. The shaft of the handle is so slender that the pan rotates easily in the hand. That makes it difficult for me to tilt the pan to pour from it, and for me that’s a flaw in this piece.

Could the handle be a replacement? That’s certainly a possibility, but looking carefully at it, I think it’s unlikely. The set of the rivets is cockamamie and unique and I see no evidence of filled or re-drilled holes. Also, cast iron handles were coming into production by the 1880s or so and supplanting wrought iron handles that were more expensive and more difficult to make. If this pan was made circa 1880 and its original handle failed sometime after that, it seems to me that the replacement would likely be a cast handle, not another wrought one.

The time frame for the maker’s stamp, the archaic casserole russe form, and the wrought iron handle all suggest to me that this is a pan of the 19th century, not the 20th. And a final element in the mix is this wonderful owner’s mark.

This is a royal cipher — a monogram custom-designed for a monarch or a member of the nobility, used to claim anything from a castle to a teaspoon. Researching these marks is difficult for me — I am not aware of a searchable repository of these, and so I resort to Wikipedia, and specifically one particular contributor named Glasshouse who has taken the time to recreate many historical ciphers. They are beautiful designs, some perfectly balanced and symmetrical, and others unexpectedly hard-edged and off-balance, and I’m grateful to Glasshouse for capturing and preserving so many of them.

Unfortunately the cipher on this piece is not a clear match to any of them. My first attempt to identify the mark settled on Ludwig  III of Bavaria, but reader Martin suggested that the monogram more likely belongs to one of the kings of Belgium. Martin located a coin struck in 1905 for Leopold II (reign 1865-1909) with the same distinctive L surrounded by many elaborate flourishes.

At the suggestion of reader Nick, I reached out to the Association de la noblesse du royaume de Belgique (ANRB) to ask whether the monogram on the pot is indeed that of Leopold II. Here is their response in the original French, followed by my translation:

We have received the photo of the copper pan with monogram. It could be that of the first King of the Belgians, Leopold I, and the number 32 could correspond to the year of his marriage, 1832. The monogram of King Leopold II is represented by two interlaced “L’s”. It would be good to check the origin of this object and the possible hallmark.

As above, the ANRB do not believe the monogram is from Leopold II but rather that of his father Leopold I, who was born in 1790 and reigned from 1831 until his death in 1865. (I respectfully disagree as to the significance of “32” — it is most likely an identifier for the pan itself, and the match to his marriage year is most likely just a coincidence.) This suggests that the pan was made sometime between 1831 and 1865 as well, earlier than I had supposed.

In light of this, and in response to reader requests in the comments, I’d like to take a closer look at its construction.

The sides and base of the pot are seamless, indicating that it was formed from a single piece of copper bent into shape. I do not see a dot on either the internal or external surfaces.

There is a faint bevel on the edge of the base, but the pot has been polished so many times that the contours have softened. I can feel the edges of the bevel more clearly than I can see them.

It is also not straight-sided. As you can see below, the pot has a slight flare from base to rim.

As this pot is not dovetailed, the other possibilities for its shaping are that it was deep-drawn (punched with a press), spun on a metal lathe, or hand-raised (completely shaped by hand-hammering). To cut to the chase, I think it was hand-raised and not spun or drawn, and I’ll tell you why.

I don’t think this piece was machine-pressed because of the texture of the metal. During the deep-drawing process, the copper flows like a liquid — it is stretched and compressed into its new three-dimensional shape. While the piece’s thickness can vary from base to rim, the change should be even around the circumference. But this piece has too much variation. I can’t capture it in a photo but when I pinch the sidewalls and run my fingers around the circumference, I detect slight swells and depressions. Had the metal flowed into shape, I do not think those variations would be there.

I also don’t think it was spun. In my experience, spinning leaves tracks on the surface of the pan and I do not see any traces of that on this piece. As examples of what I would expect to see, I offer the three spun pieces below: on the left, my much-maligned Baumalu skillet; in the middle, the bottom inch of a 22cm modern-era Mauviel soup pot; and at right, the bottom inch of a modern-era 32cm Mauviel stewpot. The Baumalu skillet shows clear track marks; in the middle piece, the Mauviel smith applied surface hammering (martelage) all over the surface except that bottom half-inch or so (constrained perhaps by the configuration of the hydraulic hammer in use?); and on the Mauviel piece on the right, the martelage was applied so haphazardly that the track marks are still visible between the hammer strikes. (I am coming to suspect that martelage was a technique developed to work-harden “soft” copper that was spun or pressed. It would also conceal the telltale marks of spinning — but only if the craftsman took the time to apply the hammering over every inch of it!)

Of course I would not expect to see traces this sharp on a saucepan approaching 200 years of age. And yet look at the all-important monogram stamp: this area, presumably spared rough treatment in order to preserve the mark, has the same exact appearance as the rest of the pot. There are no faded tracks or remnants of martelage here — the stamp sinks evenly into the surface.

But both of these opinions are just that. I do not have positive evidence that it was hand-raised, only the absence of evidence that it was spun or pressed. And of course that evidence could have been erased: the piece have been spun and then lightly hammered all over to flatten the traces. But I have another piece of evidence: a 14cm G.M Vanneuss saucepan — later than this one — that is dovetailed. If the chaudronnerie Vanneuss had a machine press or metal lathe under Michel (1835-1880), why cease using them under his successor Gèrard-Michel (1880-1901)? (Post to come soon on this one — it’s fascinating for other reasons as well — so you can check it out for yourself.)

If I were a lawyer, which I am most certainly not, I would say that the evidence I have is not conclusive, but may enough to raise reasonable doubt. I doubt this piece was spun or pressed.

But readers, what do you think?